The Arrowverse certainly has a way of bringing back some of our favorite characters in many different ways, shapes and forms.

In the preview for tonight’s upcoming episode of Legends of Tomorrow titled ‘Necromancing the Stone, Sara seems to be finding herself in a heap of trouble.

As the team struggles to defeat Mallus, who seemingly has gained the upper hand on Sara. While he may send her spiraling into a state of demonic possession, it looks as though we may be getting a different look at Sara in this episode as well.

Yesterday, Caity Lotz took to social media and posted a photo of her in her ‘The Canary’ outfit, which she wore on Seasons 2 & 3 of  The hit CW TV Series – Arrow. She posted it with the tagline ‘remember her?’ 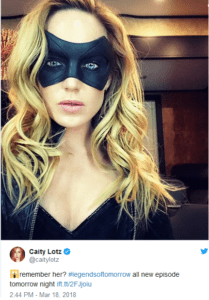 The last time we saw Sara donning her ‘The Canary’ outfit, alive, was in the Season 3 premiere episode titled ‘City of Heroes’.

After being resurrected by John Constantine, Sara made her way over to DC’s Legends of Tomorrow, where she became a key member of Rip Hunters Team. Inspired by her sister to no longer hide behind a mask or in the shadows, Sara became the ‘White Canary’.

Thanks to her leadership skills, Sara wound up eventually taking over Rip’s role as Captain of the Waverider.

Fans will find out why Sara is donning her old Canary gear on an all new episode of DC’s Legends of Tomorrow tonight!