Dominic Purcell, who was seriously injured recently on the set of Fox’s Prison Break revival, has written a beautiful heartfelt message thanking the doctor that performed plastic surgery on him, along with his co-star and longtime friend Wentworth Miller.

“Can’t describe my deep love and gratitude to my close friend and brother Wentworth Miller his concern for my health was his first priority. Went is holding up the fort in my absence his leadership and care is inspirational. He’s taken control taken it upon himself to push the production and lead by example. A true leader a true gentleman and the most fearless person I have ever met. Thanks bro. Love ya. See u in Van where we r going to crush and produce one of the most entertaining anticipated shows on the planet. Could not do this without you. Love ya. Dom. …. Ps. No more talk no more selfies of my condition. It’s done it’s over. I’m making a full recovery. Thanks for everyone’s concern. It’s time to get back to work. This chapter is closed.”

The two formed a very special bond while filming the first Prison Break, which aired on television years ago. They then brought their dual performance to the CW Network, portraying  ‘Legends’ Captain Cold and Heatwave.

He also posted the following photo below, with a special message for the doctor who performed his emergency surgery: 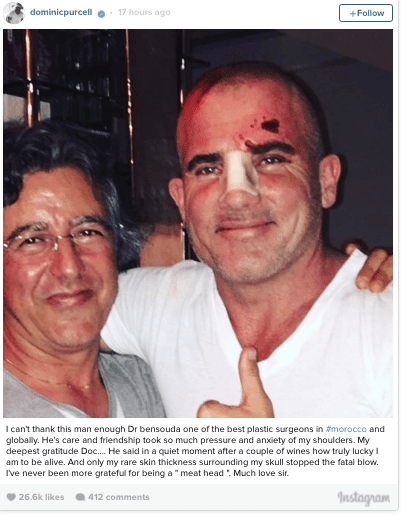 We are most pleased to hear your recovery is going well, Dominic! You are in our thoughts <3