Well, Hideo Kojima promised a new trailer of Death Stranding for Tokyo Game Show and he kept to his word. Here it is, along with a poster for the game! 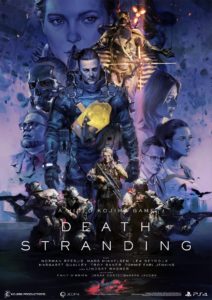 I know I say this a lot, but the more I watch of Death Stranding the more confused I feel I become. I’m still not sure if that’s a good or bad thing, but it won’t be long until we know what it is.

This new trailer almost seems to be an intro of some sort. We have an imposing voiced man in a weird mask introducing Amelie, portrayed by Lindsay Wagner. She seems to be the daughter of the (SPOILER) now-deceased president of the United Cities of America. She led a mission to reconnect these cities, but in the last one was captured. So, she’s not in the room but is able to reach out to you for some reason. And she wants your help (Norman Reedus’ character Sam) in rescuing her.

I would love to get into more of this trailer, but I’m still digesting it. I mean, I’m still trying to figure out this whole game! What is it? In conversations with my co-workers on just what Hideo Kojima is doing here, I feel lost. I think with Metal Gear Solid, we had a basis of something to go on. With Death Stranding, especially being the first game, we don’t have anything to compare it to besides maybe MGS. Even then I get the feeling we’d be wrong there.

In any case, I hope you’re as excited as I am. We are only a short two months away.

Death Stranding will be releasing November 8th, 2019. It will be exclusive to PlayStation 4 and features many famous people such as Mads Mikkelsen and Guillermo Del Toro. For past coverage of the game, simply click here! To pre-order digitally, click here!

Stay tuned to Tokyo Game Show as more information on Death Stranding will be incoming over this weekend!