The future of Jon Bernthal as The Punisher has been leaked by the staple of the Netflix Marvel series Rosario Dawson, and fans are overjoyed.

At the Chicago Comic Entertainment Expo, Dawson teased the Kevin Feige sniper squad by announcing that Bernthal’s character would return in the modern Disney Plus continuity. It didn’t take long for fans to enjoy the news, given Bernthal’s popularity with a character who has such a large following. 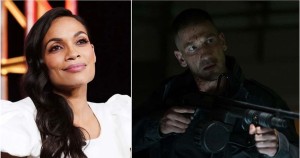 What can we expect from the much-anticipated Benuther return, which comes after Charlie Cox’s She-Hulk and an 18-episode Disney Plus series? Fans have their wish lists out, one of which is for Tom Holland to reprise his Spider-Man role.

Karen Page is another character who fans want to see return alongside Frank Castle, with their tumultuous relationship sure to continue after Daredevil and the first two seasons of The Punisher.

Of course, Marvel Studios has not said anything publicly about the sequel, with it being a popular motif in sequels being leaked before Kevin Feige makes them public. It happened with the Eternals sequel, and now that a much more well-known figure is returning, it’s happening again. Obviously, it’s an excellent excuse for that very meme-able scene from Netflix’s original. Another question remains, though: will Marvel remove the signature skull logo as it does in comic books? The antihero is currently adorned with the Japanese mythical monster Ori on his chest, attempting to distance themselves from the use of The Punisher symbol by Blue Lives Matter.

There has been no official confirmation for The Punisher’s potential third season, but after a Marvel star mentioned it, it can’t be far off.

Home » Television » After Rosario Dawson’s “Punisher” Tease, Fans Get Their Hopes Up