It is my deepest sympathies, dear reader, to inform you that the story of the Baudelaire orphans is not yet over. In fact, there is another season to this tale.

Netflix has reluctantly decided to tell the story of Violet, Klaus and Sunny due to the sudden interest in their case. The orphans (played by Malina Weissman, Louis Haynes and Presley Smith) have lost their parents in a mysterious fire and are now residing in the Prufrock Preparatory School.

But how exactly was this awful news revealed?

The miserable message was posted to Netflix’s YouTube channel and was narrated by Patrick Warburton, who plays Lemony Snicket in the series. He hinted that viewers should go to vastlyfrighteningdecision.com.

On that website, titled “A Very Unfortunate Announcement,” a letter written by Lemony Snicket said that the show was popular enough for Netflix to green-light a second season. 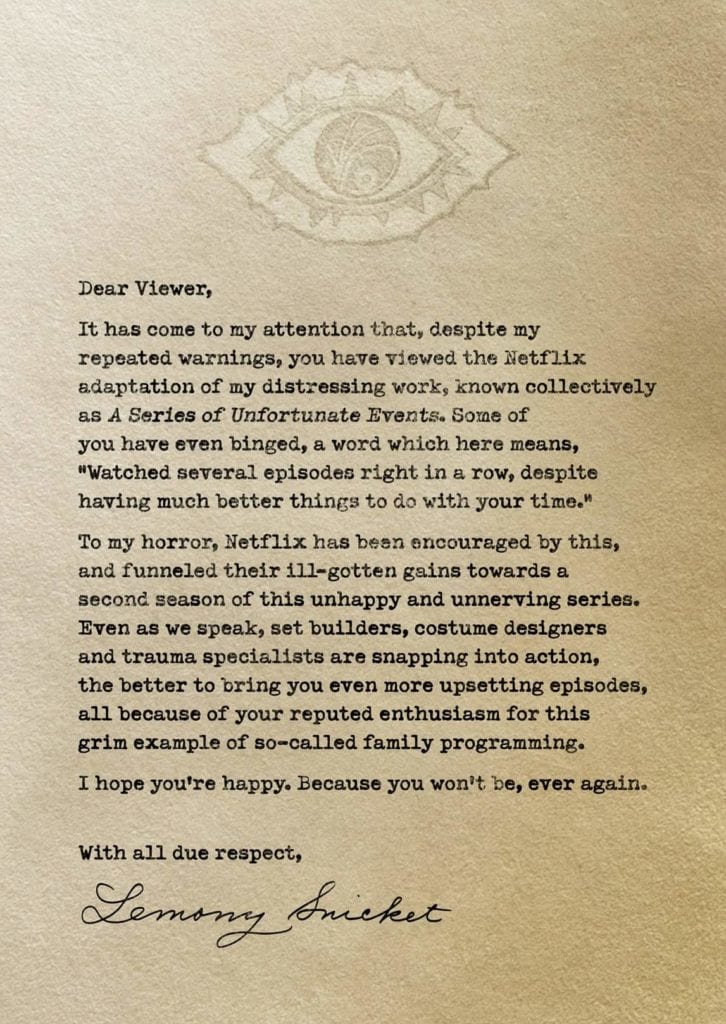 Dan Handler, author of the series and screenwriter for the show, says he hopes to cover of the books in season 2. The next one being The Austere Academy.

And now on a lighter note, Neil Patrick Harris got a tattoo to celebrate the renewal. He chose to go with something truly unfortunate. Take a look at his Instagram photo.

We got picked up for Season 2 of A Series of Unfortunate Events. I got this to celebrate. #firsttattoo #anklebone #oof #olaf #scampstamp @andersonluna @unfortunatetv @netflix

There is no premiere date set for season 2, but If I had to guess, I’d say it’ll be released at the most inopportune moment. I warn you not to come back in search of more details, but I cannot stop you from doing so either.