We’re finally past the halfway point of the season and this confusing plot is kicked into overdrive with “The Adversary”, which is this episode’s title.

Spoiler Alert, if you care.

I think it’s pretty obvious that Arnold is the adversary the title brings up. We get it, Arnold is out there in some sort of physical or technological or spiritual-whatever form and causing all poop-doopy malfunctions to go down in the park, affecting specifically the first generation hosts. My God, they should just call the entire show “ Arnold: The Adversary” because of how much they talk about Arnold. The actual WestWorld lost its focus after the first 2-3 episodes. I believe a more accurate replacement title for this episode would’ve been “Thank God No Dolores”, “Teddy’s Killing Spree”, or “Sundays With Ford’s Alcoholic Father” – That’s a good one. But honestly, with all the different story directions this show is trying to give us, call it whatever. Just not, “MedievalWorld”…because that would be false advertisement.

The freaking massive amount of storylines in this episode consisted of:

Sorry my hands just cramped up after typing all that PLOT.

But I have to say; the storyline that I was most interested in this episode was definitely Maeve’s, the saloon manager that keeps purposely getting herself killed (in the most sexually-aggressive ways) for some one-on-one time with the surgeon 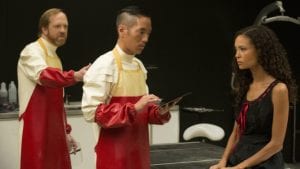 that repairs her, Felix. Apparently, Felix has been filling in Maeve on the purposes of the park and how it operates, WHICH IS WHAT I’VE WANTED SINCE THE FIRST EPISODE. All I ever wanted to know was how the hosts were made and how they functioned, and I have to say, I much prefer that reveal the way they did it here rather than just giving us some peeks in the earlier episodes. In this episode, we get to see the actual anatomy and creation of the hosts through the eyes of Maeve as Felix gives her a tour of each floor of the building; showcasing all the steps in their creative process. Maeve’s reaction, however, was pretty underwhelming. If I just found out that my life was a lie and I was artificially made then I think I’d have a much more drastic reaction; Kind of like Arnold Schwarzenegger in Last Action Hero or the Crimson Chin in The Fairly OddParents. 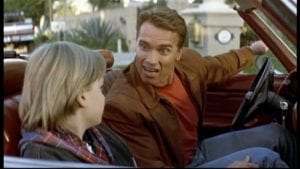 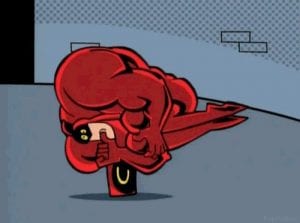 Another great scene that I enjoyed was when Felix was proving to Maeve that she wasn’t actually real by showing her a tablet that showcased her thought and speech patterns as she was saying them; which caused her to crash. Kind of just like how my computer crashed as I was writing my second draft except THAT WASN’T TEMPORARY AND EVERYTHING YOU’RE READING NOW HAD TO BE DONE ALLL OVER AGAIN. Oh well, I liked to imagine that the dial-tone noises were going on in Maeve’s head, at the time. Later on in the episode, Felix and his partner show Maeve her personality traits, which are put together using a point-scale. I loved the RPG element to this. It reminded me of when I would play Fallout 3 and put all my points into Charisma so I could be one cool cat in the wasteland and talk my way out of situations. I also put tons of points into strength, but that was just to satisfy my hidden insecurities. Eventually at the end of the episode, they max out the level cap on Maeve’s  overall intelligence; but not before finding out that somebody’s already been tampering with her behavioral patterns. Mysterious, but we all know it’s Arnold…that ADVERSARY.

Most of this episode consisted of activities happening outside of the park, which is why it felt weird still continuing Teddy and the Man in Black’s adventures. There are so many different switches to characters and storylines in this show that I’m afraid I’ll end up like Maeve and have a temporary brain shutdown. These scenes with Teddy and MiB in this episode only served as the action for the episode, and boy did they deliver with action albeit short-lived. When captured and about to be branded, Teddy breaks free and kills the entire army base with a Gatling gun reminiscent of the final scene of The Last Samurai. My favorite part about that was the look of shock on the Man in Black’s face as this all happened; we’re talking about a guy who’s killed Teddy multiple times and does bad things to generally every single person in the park including Dolores. 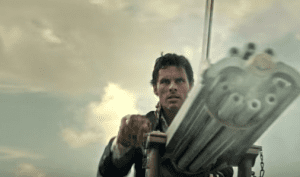 Speaking of Teddy’s girlfriend, the lack of Dolores in this episode was very relaxing to me. One of my biggest complaints about the show is how Maeve and Dolores are essentially the same character except from slightly different approaches. They kind of switch between each other’s rolls every now and then but mostly share the same plot themes. Both are being somewhat controlled and manipulated by Arnold. That Arnold…what an Adversary he is. Going around…trying to CONTROL and MANIPULATE women??? Don’t you know it’s 2016, Arnold! Or…2046 where your from? We still don’t know when this is. But in this episode, it’s clear that Maeve is Dolores’ temporary replacement by how she steals Dolores’ waking up thingy that she does every episode. I hope they keep up with this pattern because I can only really handle one of those characters at a time. 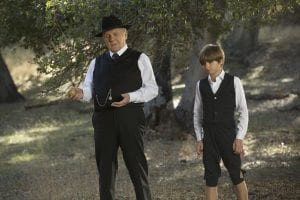 There’s still soooo much more that’s happening in the show that’s basically impossible to keep up with without writing a 13-page essay. There’s the theory on how William is a younger version of the Man in Black, as both storylines exist in different timelines, which is just constantly closer and closer to being confirmed eve 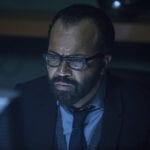 ry episode. In this episode, we see Bernard in the lower levels of the facility and stumbles upon a unique “WestWorld” logo that we only see when William and Logan first arrive. A personal theory of mine is that Bernard is actually a first generation host; just kidding, I only say that because of how boring and robot-like his acting is. Then there are all these secrets that Ford is keeping from everyone. I really don’t know what his job is…he reminds me of if Walt Disney was never frozen, and just gave his workers the “OK” to approve changes to Disneyworld and Disneyland.

Home » Recaps » A Kind of Review/Recap of WestWorld: Ep. 6 “The Adversary”