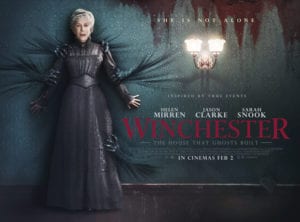 Welcome to the third installment in the series ‘A Journey into the Haunted‘. Today we are visiting the Winchester Mystery House located in San Jose, California. I recently did an article on the Winchester House in response to the release of the new movie ‘Winchester‘ starring Helen Mirren as Sarah Winchester. I have been fascinated by Sarah Winchester and her story long before this movie was even thought about. This is one of those bucket list investigations I mentioned that I would love to do however there is a very small possibility that I will ever be blessed with the chance to actually go but if you read this article and it makes you want to go and visit this amazing house then I will live through your experience. Since I have no personal experiences to share with you all I can do is share with you my years of research and tidbits I have found through the years on Sarah Winchester and the place that she called home. 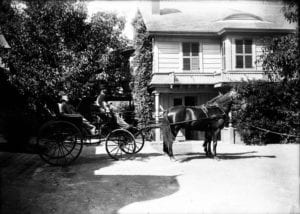 The story of Sarah Winchester starts on the east coast in New Haven, Connecticut. On September 30th, 1862 Sarah Pardee married a young man named William Wirt Winchester. William was the son of Oliver Winchester a crafty businessman who went on to own the Winchester Repeating Arms Company which was responsible for the Winchester Rifle which during the Civil War made the Winchesters extremely rich but at the cost of many lives. When Oliver Winchester passed away William inherited the family fortune. On July 15th, 1866, Sarah gave birth to the couple’s daughter Annie however she passed away on July 24th from “marasmus”. From that moment on Sarah never really recovered. Sadly, fate would deal her another cruel hand as her husband William would also pass away from tuberculosis on March 7th, 1881. 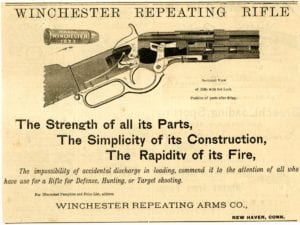 Sarah Winchester inherited over $20 million dollars from the Winchester fortune, however, no amount of money could help mend her broken spirit and heart at the loss of her husband and baby. Seeing the pain she was in her friend recommended that she seek out a spiritual medium to help Sarah find some peace of mind.

During the séance, the medium tells Sarah that William was in the room with them and that he was trying her to warn Sarah that their family was cursed because of the weapons the Winchester family had produced and that is why Sarah had lost her husband and baby. The spirits were angry with the Winchester family because they felt the Winchester’s were responsible for all the deaths from the guns. The medium goes on to tell her that she must move west and build a home for herself. However, she must continue to build on it. As long as she kept building she would live but if she ever stopped building she would die. 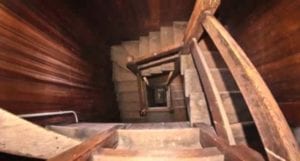 Sarah promptly sold her New Haven home and moved west in 1884 until she reached Santa Clara Valley. There she found a 6 room home that a prominent doctor had already started construction on. The house set on 162 acres so there was plenty room for growth. She hired 22 carpenters and workers to work around the clock. She had them building 24 hours a day, 365 days a year. She would meet with the foreman every morning. They would discuss her often hand-drawn plans for the day. It was also rumored that she would conduct séances and the spirits would guide her decisions on how they wanted to build the house to keep the bad spirits out. 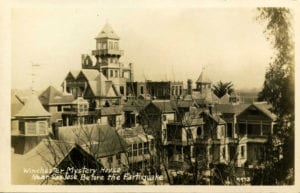 The 6 room house eventually grew into 26 rooms. (Even at the end of Sarah’s life there still was no exact count of rooms but they decided there were nearly 160 rooms at the time of her death.)  She would have them build strange things such as staircases that lead to no-where. Rooms around rooms that were already built. She had trap doors or doors that opened to drop-offs or to no-where. There were 47 fireplaces. Sarah was also intrigued by the number 13 which is always a reoccurring theme in the paranormal world. The windows had 13 panes, the walls had 13 panels and the staircases has 13 steps.
Tragedy struck the Winchester Mansion in 1906 during the great San Francisco Earthquake. The top three floors collapsed in part of the house and Sarah felt that the earthquake was the spirits way of making sure she would have to continue building. She then blocked off those rooms because she felt that the bad spirits had been “trapped” inside. 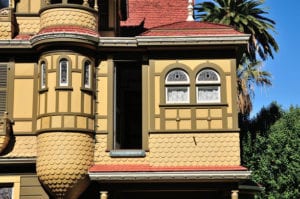 The construction continued on the home until September 4th, 1922. After her nightly séance, Sarah retired to her bedroom where she passed away in her sleep at the age of 83. Sarah left everything to her niece however with the non-stop building there was very little left to inherit. The home was sold to Robert L. Ripley who featured the 160-room house in his column ‘Ripley’s Believe it or Not‘. The house is now declared a California Historical Landmark and is registered with the National Park Service as “a large, odd dwelling with an unknown number of rooms.”

There are some similarities between the Winchester Mystery House and the house that was the “star” of the Stephen King’s Mini-Series ‘Rose Red‘. As far as the sprawling house coming alive with help of a powerful psychic young lady however that is about the end of the connections, but it is an awesome story all the same.

Now there is the question is the Winchester House haunted? I cannot answer from my ghost hunter angle because I have not been there personally to investigate. I have seen some other investigators evidence that has been supportive in nature but I think what I would really “feel” when I go in is the overwhelming amount of sadness that this poor lady had to live in. The fear and aloneness she had to live in to spend her life like that. I also believe I would experience the awe in the amazing craftsmanship that I know has been put into this amazing home. So, if one day I am blessed to actually visit the Winchester Mystery House my first step will be let her know what an awesome job she did and then if they would allow me to investigate I would be like a kid in a candy shop. However, if you are planning a trip out to San Jose and want to learn more about Sarah Winchester and the Winchester Mystery House please check out www.winchestermysteryhouse.com for more information on taking tours and also please let me know how your visit goes I really want to hear about it…..