Welcome to the second article in my new series ‘A Journey into the Haunted‘. Today we will be discussing Robert the Doll. I had the pleasure of meeting Robert several years ago during my trip to Key West. I am one of those people who find dolls creepy anyway but when you see Robert and learn more about his history you will understand why he fascinates everyone who learns about him and crosses paths with him. 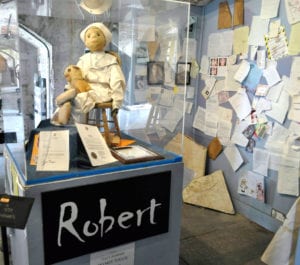 In 1904 Robert Eugene Otto who went by Gene with his family and friends was given this one of a kind handmade doll by the Steiff Company. There are conflicting reports as to whether his grandfather gave the doll to him or if it was one of the family’s maids who practiced voodoo in retaliation for mistreatment of their staff. I also believe she could have also put a curse on the doll either way. The blue sailor suit that Robert wears is likely one of Gene’s old suits from his childhood. Gene was so excited about the doll he named the doll after himself. 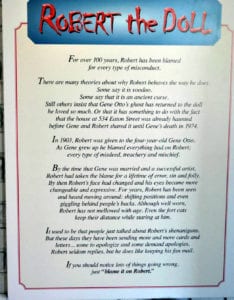 It was not long until the Otto’s noticed an odd transformation around their home. Whenever there was any trouble around the house Gene would say “Robert did it”. They also could hear Gene carrying on conversations with himself in two separate voices at the same time through closed doors. Eventually, the Otto’s became tired, frustrated and concerned about Gene’s fascination with Robert. They decided to lock Robert upstairs in the attic which is where he remained until Gene returned to the home as an adult.

After the passing of his parents, Gene inherited the family’s Key West mansion. He immediately retrieved Robert from the attic and placed him in the turret room where Gene had decided to use as his painting room and as Robert’s bedroom. As legend has it Robert could be seen walking back and forth in front of those windows as well as looking out through them. Gene was known for carrying Robert with him even as an adult. Many friends and family members had stories about how they could see Robert’s facial expressions change according to the topic of conversation especially if it was negative about Gene. Gene’s friends and family would say that he had an unhealthy relationship with his childhood companion and after his death in 1974 his wife Anne had Robert placed in a chest and placed in the attic. Robert remained there until the house was sold and the new owner donated him to Key West Art and Historical Society and he and his teddy bear are on display at the East Martello Museum. 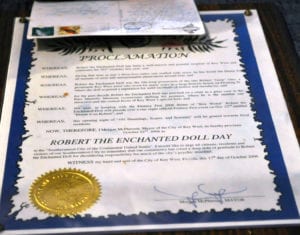 There are many legends surrounding Robert the Doll. The biggest is that when visiting him at his home in the East Martello Museum that you must first ask permission to take his photo before doing so or you will be cursed with misfortune.Sometimes it is just as small as the flash not working or the camera batteries dying but people have also reported flat tires, running out of gas, too much more serious things such as divorce and even death. The staff has learned to respect Robert and his wishes as they have seen what he can do and seen that he can move by himself overnight. 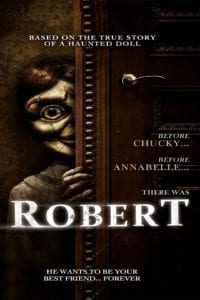 In 2015 they released a movie based on the story of Robert the Doll called ‘Robert‘. Flynn Allen plays Gene Otto. I have not seen the movie, so I can not give you any information but when I get a chance to check it out I will update you.

As I mentioned earlier I had the pleasure of meeting Robert during our trip to Key West several years ago. The photos you see throughout this article are from our visit with Robert and yes I asked his permission. 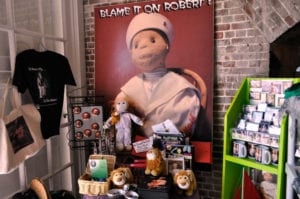 Robert the Doll is a famous guy with his own Facebook and Twitter accounts. He also has own line of merch and yes you can even buy replicas of Robert if you wanted too. He also receives emails and apology letters when people learn that they probably should have asked his permission after all.

Home » Fun » ‘A Journey into the Haunted’ Visits ‘Robert the Doll’