Welcome to another adventure with today’s ‘A Journey into the Haunted‘. Today we are going to visit Isla de las Munecas known as the ‘Island of the Dolls‘. As a general rule of thumb, a doll can be cute and cuddly. As a little girl I had many dolls but as I grew up I started noticing I did not enjoy them as much as I did as a child and as an adult I am not really a big fan. I am especially not fond of porcelain dolls. As a product of too many horror movies, I have always had this crazy idea that souls were trapped inside of these dolls. I would like to tell you that was when I was a kid, however, I picked up a doll last week and after looking into her eyes part of me felt like she had a soul. If you are interested in dolls with haunted history you can check out my article on Robert the Doll. So, the story of the Island of the Dolls as always intrigued me. Here is a little history behind this legend so you will know more as to why the locals feel the island may be haunted. 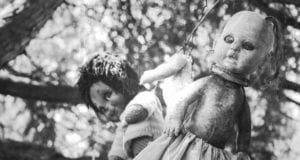 The legend began over 50 years ago between the canals of Xochimilco which is located just south of Mexico City. After the mysterious drowning of a young girl, the island’s caretaker Don Julian Santana Barrera was unable to save her and decided to hang a doll that he found floating near her body to show respect and to bring comfort to her spirit. 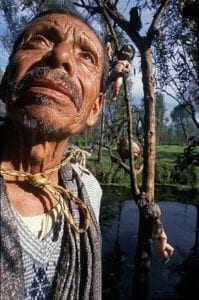 Don Julian either overcome with guilt that he could not save the young girl, or the spirit of the girl started to haunt him, but he began hanging more dolls as a way to make the little girl’s spirit have peace. However, before long he realized that the dolls he had been bringing and leaving for the little girl had spirits inside of them. His family noticed a marked change within Don Julian almost as if he was obsessed with finding the dolls and hanging them around the island. He continued bringing dolls to the island for nearly 50 years until his death in 2001. His family found his lifeless body floating in the location where the little girl drowned all the years before. 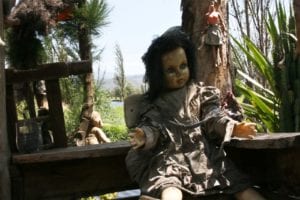 The simple gesture of honoring the spirit of a young girl has lead to one of the creepiest locations I could imagine. When Don Julian started bringing the dolls to the island he felt that some of the dolls had spirits of dead girls within them. Which lead to reports that some of the dolls would move by themselves, cry, giggle or even whisper to each other. There were even scarier rumors that the dolls would try and lure those who pass by to come to the island.

There is a movie being released in 2018 that is based on the story of the Island of the Dolls.  The story is about a British journalist who is assigned to do a story about the Island and the horror that befalls her. 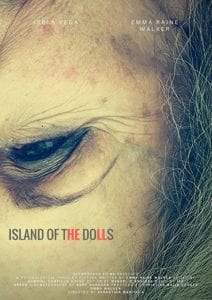 So we arrive at the question is Island of the Dolls haunted? Again, there is the drowning of the young girl which could lead to a haunting, but I am not sure that could lead to a haunting of an entire island. There are also instantaneous when items can be haunted. There are many reasons for an item to become haunted. If something traumatic happened near an object, the negative energy can be transferred to the item. If someone loved an item dearly such as a doll, chair, or car sometimes upon their death their energy can become attached to that item. So, if some of the dolls had belonged to young girls who were extremely attached to those dolls in life then they could possibly be haunted. The truth is most of the dolls have been left to age for decades, they are dismembered and hanging from trees that alone will bring enough fear from visitors that could cause a negative energy. This is a location I most likely will never get to visit however if you are interested they do offer tours to Isla de las Munecas. If you do visit with the dolls please let me know how it goes. Until next time dear friends…. Happy Haunting!