Welcome readers to another article in my series of ‘A Journey into the Haunted‘. Today we will be visiting the famous ‘Amityville House‘. Now I just to share a scary moment as I opened my Microsoft word and made the decision of which paranormal rabbit hole we would travel down today I was researching different topics and my ‘Alexa‘ speaker powered on by herself without me talking to her and scared the crap out of me. Which is funny since I am a ghost hunter and go in search of ghosts you would think I would be used to those type of things, but it still took me off guard (by the way she played anything just powered on). We have a couple of ghosts that are attached to our property here at our home, so I am not sure if they are jealous I am talking about all these other ghosts or what. Just wanted to share that bit of ghost hunter nerd humor with you all. 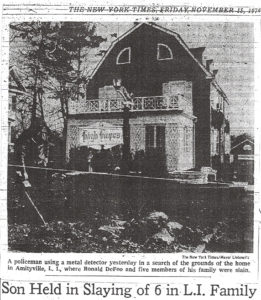 So, let’s move on to the story of the Amityville House. This is probably one of the most famous haunted houses to ever catch the world’s attention. In the past all the standard “haunted houses” were all fallen, old abandoned houses that you were warned to stay away from in the neighborhood. But when the story of the Lutz’s haunting made national news and the photos of their beautiful breathtaking two-story home were released we could just not get enough of their story and neither could Hollywood.

We must first learn of the horrors that took place in the beautiful home located at 112 Ocean Avenue Amityville, Long Island, New York before the Lutz family even moved in to even begin to understand why the stories of the house being haunted even began.

On Wednesday, November 13th, 1974, Ronald “Butch” DeFeo Jr. who was 23 years old at the time shot and killed his family as they slept in their beds around 3:00 a.m. that morning. He shot his father Ronald Defeo Sr. (44) and his mother Louise DeFeo (42) both twice with a rifle. Ronald then proceeded to his sibling’s rooms: Dawn (18), Allison (13), Marc (12) and John Matthew (9) and shot them all once as they slept in their beds. He then waited until 6:30 P.M. that night before walking into a local bar asking for help from the bar patrons that his parents had been shot. Upon arrival of the group, they realized the true amount of horror that had taken place at the family’s home.

Butch DeFeo tried to convince the police that the killings were actually carried out by a mob hitman, however, the police noticed his inconsistent stories and he eventually admitted to “Once I started, I just couldn’t stop. It went so fast”. 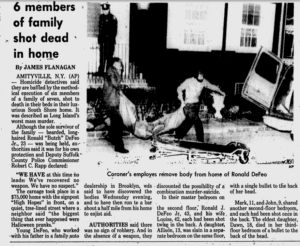 Ronald DeFeo was arrested, and his trial began on October 14th, 1975. His defense lawyer William Weber decided to attack his case as “affirmative defense of insanity”. One story was that he heard voices inside the house that told him to kill his family. My favorite story is that the house possessed him and made him kill his family. Another story he told was that his sister Dawn killed his father, then his mother shot Dawn and his siblings then herself. No matter his defense he was found guilty and is serving multiple life sentences. As of this article, he is still alive with no chance of parole. 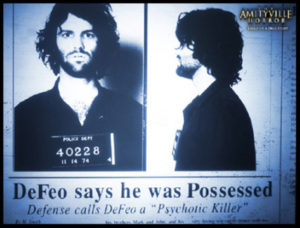 In December 1975 George and Kathy Lutz have their homeowner’s dreams come true. They purchase the Defeo home for just $80,000. They could not believe their luck. This large and stunning home was within their budget. To add to their luck, it came “furnished” as is with the furniture still in place from the previous owners for just the low low price of $400 dollars more. I mean WOW just the price of one of those beds upstairs cost that I am sure!!!!! At the time it was not required for a realtor to reveal that a location was the site of a traumatic event or a haunting but in some states, it is now required if the home has a “history” of being reported as haunted that they must inform a potential buyer. However, the Lutz family were advised of the murders and had decided that they could “handle” the houses history and the family moved in on December 19th, 1975. 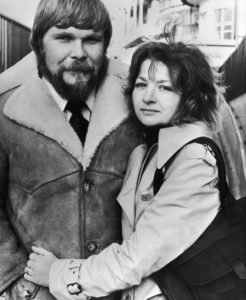 Kathy Lutz must have been “concerned” because she did ask Father Mancuso who lived at the local Sacred Heart Rectory to come and perform a blessing as the Lutz’s were unpacking on December 18th. While performing his blessing on the second floor in the room that used to be the bedroom of Marc and John Matthew DeFeo a deep mysterious voice demanded that he “GET OUT”. The priest left the home and when he called to warn the Lutz’s about that room all he got on the phone was static and he became very sick with a high fever and blisters shortly after. 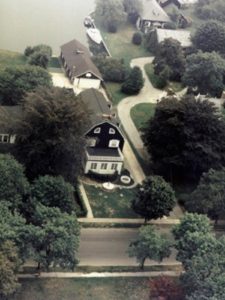 However, life for the Lutz’s began in their new home just as it would in any new home but things began to happen that would become the history of the “Amityville Horror”. George Lutz would find himself waking every morning at 3:15 A.M. He would go the boathouse and check on things for some reason. He would learn that this was the time frame that Ronald DeFeo killed his family. Missy Lutz one of the Lutz’s children developed an imaginary friend named “Jodie”. “Jodie” reportedly took many forms but on Christmas morning in 1975 George Lutz, he witnessed “Jodie” standing behind Missy in an upstairs window looking out however when he reached her room Missy was asleep and her little rocking chair was rocking by itself.

As the days passed by the family became more troubled by the events taking place, Kathy would be covered in whelps, George would notice that he resembled Ronald Defeo Jr. and even started drinking at “Butch’s” favorite bar. The locks, doors and windows throughout the house were often damaged by unexplained forces, a huge crucifix would revolve around upside down and would smell bad. The once happy couple had begun fighting and the family was rapidly dividing. Deciding that there was something wrong with their home they decided to do a blessing themselves. So, on January 8th, 1976 George Lutz held and silver crucifix and together they recited the Lord’s Prayer. During the blessing, George allegedly heard a chorus of voices that yelled: “WILL YOU STOP?”. That night they left the home and but returned to the house on January 14th, 1976 to try once more. However, the events they claimed that occurred were too “frightening” to ever give a full account to anyone. The family left that night and never returned. They sent a mover the next day who reported no paranormal at all. 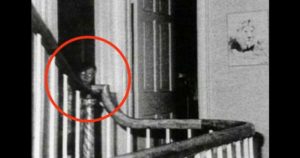 This has become one of the most debated paranormal stories of all times. Many people have accused the Lutz’s family of faking their story to make money from all the movie and book sales. As there has been very little evidence of the home being haunted. There are a few pieces of evidence and some testimony but as a rule, it has always been more Hollywood hype. There has been one photo caught of a young boy ghost who is thought the be the spirit of John Matthew.  Again, this is one of the stories where the truth and tragedy that happened in this home is more terrifying than any ghost story that has ever come out of this “legend”. However, George and Kathy Lutz were able to sell their story to the world and everyone bought it true or not. There have been so many books, T.V. shows and movies that have covered their story some based on true events and some just for Hollywood make-believe. 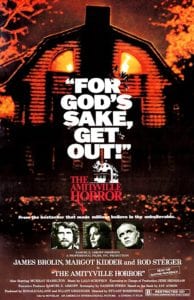 The most famous is the 1979 classic ‘The Amityville Horror‘ starring James Brolin as George Lutz and Margot Kidder as Kathy Lutz. This gave us the house that nightmares were made off even though it was not the actual house just one that resembled the original. When asked if they thought the story was true both stars both said they did not believe it was true.

Now that was the history of the infamous home. As far as if the home is haunted has always been the focus of every ghost hunter dream investigation and it is one that not that has ever been granted that I am aware of. For the exception of the famous paranormal research team Ed and Lorraine Warren who returned to the home 20 days after the Lutz family left the home for the last time there has not been anyone else allowed into the home to do research. Also, there has not to anyone’s knowledge been any reports of any paranormal occurrences in the home since the Warren’s visit. The house has been sold many times and at the request of the last owner has even had an address change. 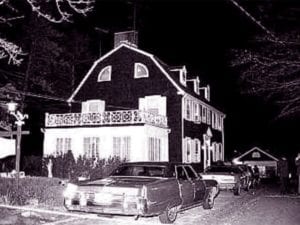 So again, we circle back to the topic of is this house haunted? I think that you cannot have something as traumatic as having an entire family murdered as they slept take place and not have some negative energy and possible haunting within a house. However, I am not sure that that is the case in the Amityville House. Without being there or being allowed go inside I can’t say either way but I know that when someone offers you a home that beautiful for that low of a price ALWAYS check the history before you move in, definitely call the priest BEFORE you move in and splurge for new beds PLEASE even if $400 sounds like a good deal. Until next time Happy Hauntings…….

‘A Journey into the Haunted’ Visits the ‘Lizzie Borden House’

‘A Journey into the Haunted’ Visits ‘Chickamauga Battlefield’

Home » Fun » ‘A Journey into the Haunted’ Visits the ‘Amityville House’