As a child, you dream and dream about having a very special friend in your life. There are four types of friendships that people seek. For some, it is an imaginary friend that they create to go with them on their ‘wild adventures’ since they feel like no one can really understand them. Others, they try to grow as close as possible to every single person they meet in hopes of finding that connection. The third type, is someone who just follows a long with the crowd they feel like they best belong. The fourth and final type, is the person who seeks a special companionship in a very special being. That being, is a furry friend. In a grand battle of Cat vs Dog or Hamster vs Rabbit, it ultimately doesn’t matter. We all have our preferences in regards to what type of furry friend we want.

With the upcoming hit A Dogs Purpose set to arrive in theaters, it had me reflecting myself on how important these furry friends are in our lives (not just of the dog type). Some people may go see the movie and feel an overwhelming sense of fulfillment and satisfaction; and others may still be left wondering. That is why I feel it is important to tell you what I feel as though a dog’s purpose is, but not as my Veterinary Technician self; but of that as a Soldier in the United States Military.

I’m going to be a hundred percent honest, after joining the Army the last thing I ever thought about was a dog. In fact, I didn’t want a dog. I had one prior, and all I remember it being was a complete chore. I had to be home by a certain time to let him out, had to buy the food, had to walk it, had to play with him… and the list goes on. Bottom line, I had recently signed by life away to the United States Army and for me that was committment enough. Why did I need to bring a dog into the fold?

One morning when I was camping, I got a text from my ex’s sister in law, telling me that there was a German Shepherd puppy that needed a home. The breeder was going to move to Florida and they couldn’t afford to take another puppy with him along with the mother. So for a while I debated. His picture was cute, sure. Maybe I could just go and take in the satisfaction that I would get to play with a puppy. Playing with puppies was always fun because in the end, (like with grandchildren from what I’m told) you get to give them back at the end of the day. So, I made the journey to go see this puppy.

I remember him sitting there is his pen and the second he saw me he stood up, shook out his fur and began trying to climb the fence. The breeder told me she had never seen him do anything like that before, and that he normally just laid down and would occasionally pick his head up. She opened the gate, and he charged right for my open arms. The second I held that puppy in my arms, I felt this overwhelming sense of comfort. Looking back at it now, I think he knew that I needed him just as much as he needed me. The next thing I knew, I was bringing this puppy home. He got the name Soot, which is a different story all on its own. 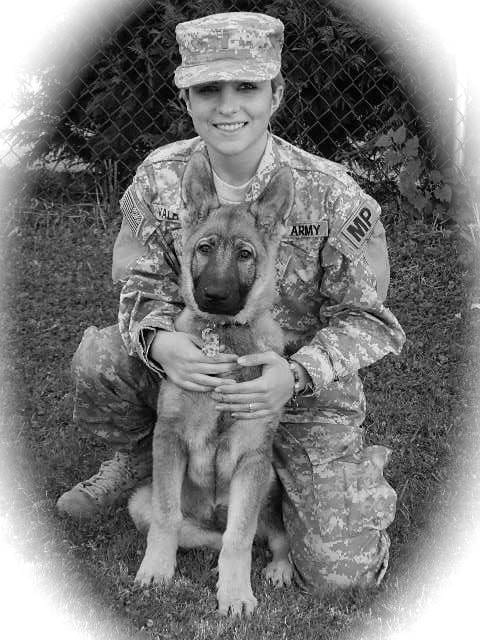 I fought through all the normal ‘puppy’ terrors. The chewing, the going to the bathroom at 2AM, and the constant barking. But in actuality, it wasn’t so bad… until he was about 8 months old. I had to go away for the military for about 5 months; which was going to be one of the most crucial parts of him growing up. I remember looking into his brown eyes as I stood there with my ruck sack and I kissed his furry head and said ‘I’ll be back buddy. Mommy’s just gotta go away for a little.’

The months passed, and all I could honestly think about was getting home to Soot. I didn’t realize how much joy he brought me until I was no longer a part of his life (well temporarily). When I came home, I had never seen anyone or anything so happy to see me. It was a classic Hallmark moment in which he jumped in my arms. He had gotten taller than me! As much as this brought me happiness, that was when all the problems started. Soot had developed a fear towards men and strangers, and I wasn’t 100% sure where it was coming from. There were times when he was even a little skeptical of me, especially when I would reach for something that was high up in the air. I figured maybe he was just going through the ‘fear’ phase that all puppies go through.

About a year later I had to go away again for about 2-3 months. This time when I left, with the same ruck sack, Soot gave me this look like his heart was broken. I said the same words.”I’ll be back buddy”, and then I left. On that mission, it felt as though I was almost just going through the motions. All I kept thinking about was Soot. I reflected back to when I first got him from the breeder as a puppy. About how much I didn’t originally want him, and now that he wasn’t with him… I needed him. He had a purpose in my life. He was my reason for waking up in the morning, he was what brought me pure and utter happiness. Shortly after I came home, I had discovered that my ex had abused my Soot and indirectly gave me a motive. Me or the Dog. I remember thinking it wasn’t even a hard choice. I chose Soot.

So now that I’ve gone on my tangent, what do I feel is the essential purpose for a dog? Well, to be honest, I don’t think that any dog has a single purpose; just like I feel like every single dog has a different purpose. In my case, Soot’s purpose was making me realize what complete happiness was, and cutting all the toxic people out of my life.  I was a damaged, torn soul… and having Soot in my life made me 100x stronger. He made me realize what true loyalty and trust was. We see all these memes and hear all these stories about how a dog is truly a human’s best friend, and it is.

There may be times when they are the world’s biggest pain in the tush, of course. But when you balance those moments with those seconds when your dog looks you in the eyes and you can SEE the love, it makes it so much more worth it. The size, shape and breed don’t matter. You will never find a more unconditional love for a human being than you will with a dog.

What do you feel like a Dog’s purpose is?? Tell us in the comments below!

Home » Fandom » A Dog’s Purpose from a Soldier’s Perspective