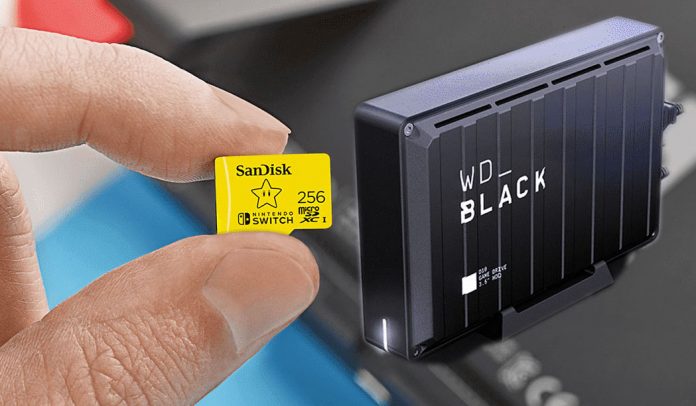 Final Fantasy VII Remake. Doom Eternal. Cyberpunk 2077. Marvel’s Avengers. The Last of Us Part 2. 2020 is going to be a year FULL of amazing game releases! Though there is one fear in the back of many gamers’ heads that they’re trying not to think about right now: Do I have enough space?

We’ve all been there. You start to install a new game – or even a DLC – only to be told that there’s not enough storage space. Now it’s time to figure out which of your old games faces the chopping block. Whether you buy disk or digital download, installations, patches and DLC can quickly fill up your Hard Drives. Sure you can always replace your console’s internal hard drive. In fact, some systems even give you instructions on how to do it! Though maybe (like me) you’re nervous about breaking open your console and tinkering. And what happens when that console eventually ‘fades out’? Do you have to crack it open again to get the newer hard drive out? Thankfully, there’s a much easier solution to all this: get an external.

Whether you’re gaming on PC or console, external hard drives offer you loads of flexibility and are relatively quick and easy to set up. But what are the best brands/ versions to get? As you can imagine, your budget and gaming habits will greatly influence which are best for you; but I’ve compiled a quick glimpse list to help get you started.

This is actually pretty self explanatory; but I wanted to include a section on this to show you just how simple and easy the process is. Installing an external hard drive for your PS4 or XBox One is just as simple as doing it for your computer. Though its important to note that you’ll specifically need a USB 3.0. As for the set up, just plug it in and head to your settings menu to format the drive. For PS4, you’ll specifically want to head to Settings -> Devices – > USB Storage. From there, just follow the prompts to format the new drive. Similarly for the XBox One, just follow the prompts to format – though the XBox One should take you right there with a prompt as it auto-detects it. Just note that formatting the external will most likely wipe it, so it’s best to have a new external.

As for the Switch, that’s a little different and I’ve seen two methods. The prominent method that ensures no data loss requires an SD Card reader and linking to a computer to transfer your existing data. The other method is simply swapping your SD Cards but you’ll have to re-download each of your games. Additionally, I’ve seen tutorials that say archive your game data first and others that don’t. So if it’s possible, I recommend the computer transfer method as it’s faster and seems to have less room for error.

When it comes to External Hard Drives for gaming consoles, you’ll find a lot of overlap in terms of brands. Sure there’s always some stand out exclusive ones; but leading the pack are usually brands like WD and Toshiba. They’re sturdy, reasonably priced and have great storage options. Plus they’re both trusted brands! Though WD just came out with a new line of External Hard Drives that’s built specifically with gaming in mind! There’s loads of options that differ based on your preferred gaming system as well as what kind of gamer you are. If you enjoy gaming on the go and want to take your library with you wherever you go, then the WD_BLACK™ P10 Game Drive might be for you. It’s incredibly durable, simple to use, has speeds up to 140MB/s2 and comes with 2 to 5 TB of space!

On the other hand, if you don’t care about portability but rather quality/quantity of games, then the WD_BLACK D10 Game Drive is the clear choice. Between self-cooling technology, speeds of up to 250MB/s2, and an astounding 8 TB of storage, you will never have to worry about ‘making space’ ever again. So if you have a massive game library or are looking to get into recording your gameplay sessions, this is the buy for you!

It’s important to note that the above WD options will work on all consoles and PC. Though if you’re an XBox One user, then you might want to choose a slightly different WD purchase option. The same choice between the P10 and D10 Hard Drives remains, but XBox One gamers have a special alternate version that includes a membership of Xbox Game Pass Ultimate. The only remaining difference of note here is that the P10 comes with a 2-month membership while the D10 comes with a 3-month membership. Though considering how P10 is the choice for Portability and D10 is the choice for Depth, this difference makes sense.

Unlike the PS4 and XBox, the Nintendo Switch actually uses an SD Card. As I noted in my ‘Set Up’ section, the set up process is a bit more confusing. But as far as choices go, Samsung and SanDisk are the clear leaders.

Samsung EVO is a great card that can not only store a bunch of games, but also load them incredibly fast. If you’re looking for 512GB worth of storage, they’re the clear choice in terms of value. That being said though, when it comes to other sizes, SanDisk takes the lead in terms of value. SanDisks come in a range of sizes and are all reasonably priced. Though I will say that their 1TB Extreme Micro SD card is pretty pricey. At over $400 you could easily buy almost 5 of those Samsung 512GB.

But we’re talking about a Nintendo Switch here. You customized your controller. Bought a snazzy screen. Wouldn’t you want to trick out your SD card too? For that, SanDisk actually has a line of licensed Nintendo SD Cards. They range from 64GB to 256GB; and they’ll cost you about double what the competitors do at each storage level. Though that’s a small price to pay for having the Royal Crest from Zelda or the Super Star/ Super Mushroom from Mario inside your system.