Recently, the internet celebrated the 42nd Anniversary of the Stephen Spielberg Thriller; JAWS. Now that it is summer, July in particular, we can turn our attention to Shark Week which will air at the end of this month. The line-up consists of several exciting events and shows, including Michael Phelp’s insane ‘race a great white shark’ challenge.

I don’t know about anyone else but the very first thing that I think of whenever someone says ‘Great White Shark’, is JAWS. The very first time that I saw the movie was at Wildwood, NJ when I was eight. My dad was attempting to teach my brother and I some sort of life lesson about going too far out into the water away from the shore. Let me tell you something, it certainly worked! As a matter of fact, I’m almost positive I took up shell collecting as a hobby that summer.

Here is a list of life lessons that you could say I learned from JAWS:

I mean, why would anyone want to listen to the guy who spent a lifetime studying the creatures of the sea when you can say ‘to hell with it’ and get that summer tan. It’s not like he’s got a degree in this particular subject or anything, oh wait….

Probably one of, if not, the most iconic line from the movie. The fair sheriff had a point, they did need a bigger boat. However, if you’ve seen the size of the beast himself, you know that no matter what the boat size was, he would have still probably taken it down. 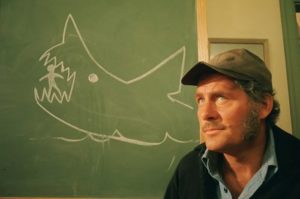 I honestly don’t know which scenes in the movie made me cringe more, the whole shark swimming around and eating people thing or this iconic scene where Quint scrapes his nails along the chalk board to get the attention of the room where he tells the mayor for $10,000 he will bring him ‘the head, the tail, the whole damn thing’. Since when did city hall meetings go from raising your hand to make a statement to shrilling your fellow townspeople’s ears? Sheesh!

If kicking it doesn’t work, ramming it with your boat won’t slow it down and you can’t get a clear body shot… what do you have left to do in order to defeat a gigantic man-eating shark? Make is smile, apparently! After tossing an oxygen tank into the water for the shark to eat (weirdo shark… who eats metal?), all Sheriff Brody had to do was to get the beast to smile so that he could get his shot in and blow the shark outta the water, literally.

When was the first time you saw JAWS? Did you learn any fun or valuable life lessons!?