‘Man’s best friend’ is a term that has been spoken throughout the generations. This title has been bestowed upon the most loyal and loving individuals to walk this Earth. Our dogs.

Whether you have a beloved pooch of your own or not, everyone enjoys a good dog movie. I have gathered together a list of 21 dog movies that I personally believe all dog lovers should see; ranked from 21 to number 1! Or if you are on the fence about getting a dog of your own, here are some great movies for you to enjoy in the meantime! 🙂

Who could forget this unforgettable animated movie? It is such a heartwarming tale of love, friendship, and teamwork. Balto has been touching many hearts over the years. Kevin Bacon voiced Balto, a young  wolfdog; being half-husky and half-wolf. His father was a Siberian husky and his mother, Aniu was a white wolf. I loved the moment when he saw her in the snow storm and they started howling together. Absolutely adorable.

One of Disney’s most adorable tales yet. Bolt tells the story of a young puppy named ‘Bolt’ (voiced by John Travolta) who gets adopted by a young girl named ‘Penny’ (Miley Cyrus). ‘Bolt’ has spent his entire life on the set of a television series, and because of that, he thinks that he has super powers. When he believes that his human, Penny, has been kidnapped, he sets out on a cross-country mission to “rescue” her. 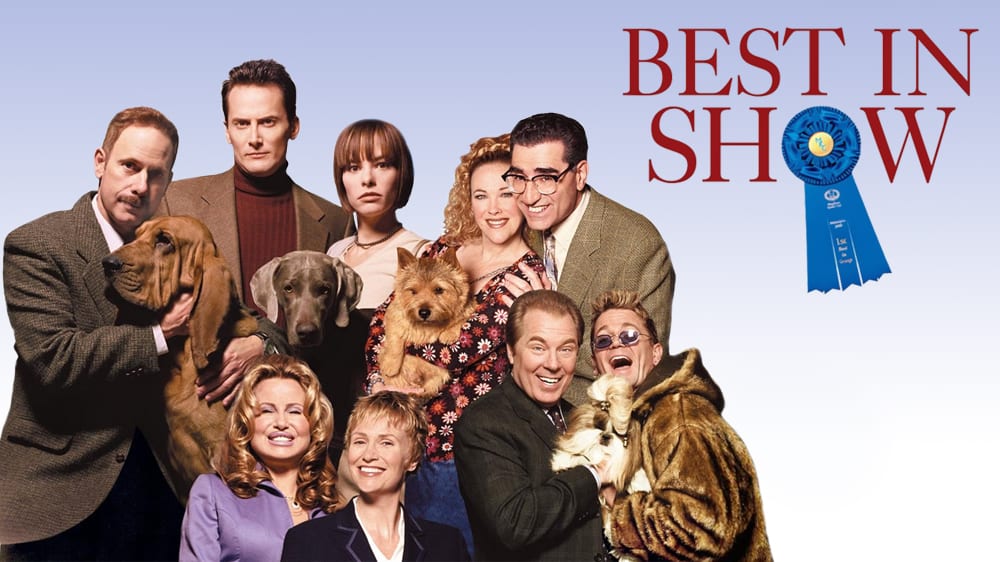 For those of you who enjoy watching the American Kennel Club (AKC) dog shows on television, this one is a great comedic relief for you. The film follows the story of five entrants in a highly competitive dog show and focuses on the some of the surreal interactions among the various owners and handlers as they travel to the show and compete.

18. Adventures of Milo and Otis

The movie follows a pair of best friends, a pug named Otis and an orange tabby cat named Milo, who get separated, and embark on a treacherous adventure searching for each other. Looking at this picture right now, I seriously can’t even. It has to be one of the most adorable movies out there.

This animated 80’s film is another one that is pretty unforgettable. After being killed by his rival, Charlie wakes up in heaven. As per default, all dogs go to heaven. Charlie is given a chance to go back to get his revenge, being warned that if he carries out his vengeful plot… he may not be allowed back in heaven. He enlists the help of a sweet orphan named Ann-Marie, who can talk to the animals. In the end, Charlie gives his life to save Ann-Marie, allowing him to return to heaven. This film still makes me cry, to this day.

Tim Allen plays the role of DDA Dave Douglas, who is gunning hot for the DA position. He’s workaholic who repeatedly neglects his wife and two kids, Dave is currently consumed with prosecuting his daughter’s social studies teacher. When a mysterious 300-year-old sheepdog from Tibet canine breaks free, from a team of scientists conducting tests on it, it finds its way to the Douglas family (who call him Shaggy). Shaggy bites Dave, and Dave slowly turns into a Shaggy look-alike. If you’re looking for a feel-good comedy, I definitely recommend this one!

Whenever I eat Italian food, I always remember this movie. Talk about a Disney classic! This movie tells the tale of a how a tramp’ (who lives on the street) falls for an upper class cocker spaniel. This is a phenomenal movie for the entire family to enjoy, not just the kids.

After a thug kill’s Turner’s friend Amos, takes on Amos’s murder case. Turner brings home Amos’s beloved dog, Hooch.  Hooch destroys the investigator’s house, and even tears up his car.  Turner and Hooch slowly bond, and they work together to solve the murder. Such a heartwarming tale. If you have not seen the movie, you definitely need to. I won’t spoil the ending, but have the tissues ready.

This movie stars Frankie Muniz as 9-year-old Willie Morris, who is given a Jack Russell terrier for his birthday. The movie focuses on friendship, family and how the boy’s dog ‘Skip’ changes several aspect of Willie’s family’s life.

Paul Walker (R.I.P) warmed our hearts with this beloved tale of one man and his eight sled dogs. When a fierce winter storm threatens the safety of their outpost, the crew is forced to abandon ship. The dogs have to remain behind, as there was not enough room left on the helicopter. This story illustrates a beautiful tale about the eight dogs survival in the wild, alongside one man’s quest to return back to his beloved canines.

Rin Tin Tin is perhaps one of the most well-known dogs in the world. The iconic war dog, a German Shepherd, has won over the hearts of people across the globe. Rin Tin Tin became so famous that he even got his own television series. Most of the films about this hero were made in Germany and are hard to come across, but most are available on Amazon. Out of all the Rin Tin Tin films, Finding Rin Tin Tin has got to be the best one. Look at that face!!

Look at that guy run!! Beethoven was released in 1992, and he still continues to warm our hearts to this day. When the Newton family decides to adopt a cute St. Bernard puppy, everything seems peachy keen. As Beethoven grows up, the goofy dog becomes responsible for a number of household mishaps. See the photo above? Beethoven’s life with the Newton family becomes jeopardized when a wicked veterinarian attempts to kidnap Beethoven for an experiment.

This movie adaptation of the original novel written by Jack London is spectacular. This tale focuses on a man named Jack Conroy, an adventurer who journeys to Alaska in search for gold. Jack encounters White Fang, a wolf hybrid who has been abused by his owner. Jack rescues the White Fang during a dogfight. Jack nurses White Fang back to health, and White Fang becomes Jack’s companion. 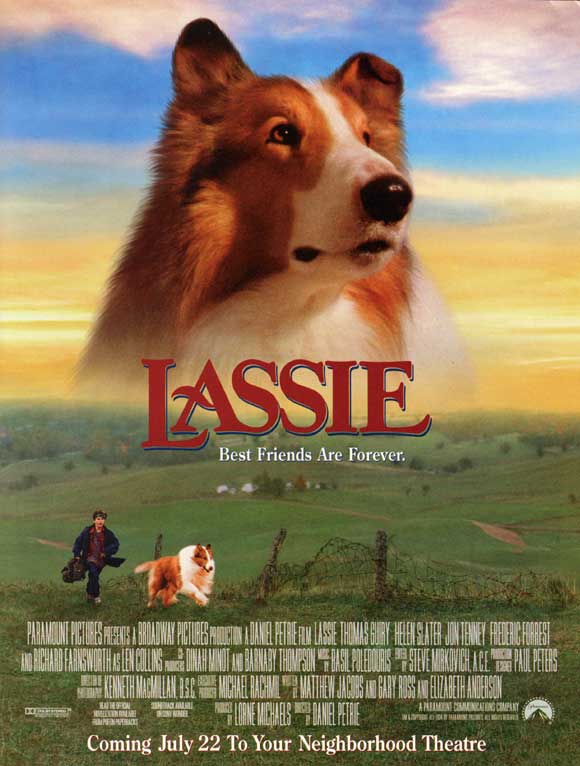 Lassie is another classic film that should be passed down through the generations. If there is ever a tale between a boy and his dog that you don’t want to miss, it is Lassie. Every time I see a collie out walking, I instantly think of Lassie. Lassie proves that no matter what happens, home is where your heart is… and that quitting is never an option. For those of you who have already seen this film, you know exactly what I’m talking about! 🙂

Max is one of the more recent doggie movies to be released, and it is absolutely amazing. The story centers on Max, a Belgian Malinois whose owner was killed in the line of duty. Max returns stateside, and is taken in by the family of his former handler… but it is not an easy transition. Max is suffering severe PTSD and has trust issues. This movie is an extremely heartwarming tale, and honors our K9’s out there serving in the military, as well as their handlers.

Thanks to Air Bud, ‘Buddy’ has become one of the most iconic Golden Retrievers in the world. The original Air Bud told the story of a young boy, who gained the friendship of ‘Buddy’, a golden retriever who ran away from his abusive owner. There have been several more Air Bud movies, where the beloved pooch takes on more sports such as Football, Soccer and even Volleyball. I will always favor the original, where it all began. I wonder if I can get Soot to swing a tennis racquet this weekend when I head down to the park to play…..

Benji follows the story of a stray who roams freely all over his Texas town. When two children Benji loves are kidnapped and held for ransom, the dog springs into action, taking it upon himself to take on the kidnappers and save the day. Lovely movie for the entire family!

Hachi: A Dog’s Tale is based on the true story of a faithful Akita and the bond he builds with his owner. I stumbled upon this film while looking for a different film altogether. One of the greatest ‘accidents’ that I have ever come across. This movie is absolutely beautiful, and if you’re looking for a feel-good movie that centers on the loyalty and friendship between a man and his dog, this movie is for you.

Based off of the best selling novel Marley & Me, this movie was brought to life in 2008. Jennifer Aniston and Owen Wilson are casted in the roles of John and Jenny Grogan, and they truly make this film beautiful. When the couple adopts a Labrador Retriever puppy, they have no idea what they are getting themselves into. Marley is referred to as the ‘worst dog ever’, multiple times throughout the film, teasing his ‘naughty’ behavior. Anyone who has ever raised a puppy will surely get a laugh out of this one.  However, this is another movie in which you will want to have the tissues ready.

As I discussed in my recent Throwback Thursday, Homeward Bound is one of the most well-known doggie movies out there. When Shadow, Chance and Sassy are left at their family friends ranch so that the family can go on vacation, the 3 furry companions think they are left behind. They set out on an adventurous quest through the wild lands of California, on a journey home.

This movie is an absolute classic. If there is one ‘dog movie’ that I would say everyone should see, it is definitely Old Yeller. Even though it is a relatively sad tale, this film shows the beauty of the bond that is developed between a man (or woman) and their dog. 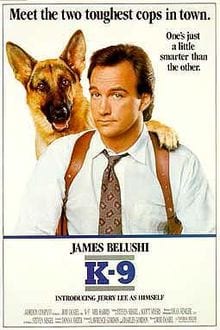 This was one of the movies that inspired me to get a German Shepherd of my own, my beloved Soot. This movie tells a tale of the bond that grew between a police officer (Jim Belushi), and his K-9 partner.