Joe and Anthony Russo continue to stay, for the most part, hush about Avengers 4. A month ago, they shared one rare tease. It was a behind the scenes photo, with instructions. “Look hard for clues about Avengers 4.”

A few fans happened to find the letter “A” written four times in the photo. Alas, this discovery didn’t turn to anything.

MCU Cosmic is now saying that they have an inside source which suggests they know the title.

According to this source, the title will come from a Marvel Comics event series, Avengers: Annihilation.

This is the photo in question, with some A’s made out of a ladder and camera equipment: 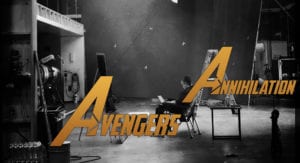 It could also signify Avengers: Assemble, but Annihilation seems to be the favorite of the two possibilities.

Annihilation, which debuted in 2006, was a crossover series that brought many of Marvel’s heroes and villains together. Nova, Thanos, the Silver Surfer, Super-Skrull, the Guardians of the Galaxy, and Ronan the Accuser were brought together to stop Annihilus and his Annihilation Wave from destroying the universe.