Welcome back to another The Walking Dead preview Geeklings. Last week we took a much needed detour to the zombie apocalypse equivalent to Renaissance Fair, and this week we it’s time to return to our regularly scheduled doom and gloom. Yay harsh realities of the zombie apocalypse!

This week it looks like we’re going to get our first real look at Negan’s compound which should be all types of interesting and informative. After the premier (and the last ten minutes of the last seasons finale) it feels like we know quite a bit about Negan, but the fact of the matter is we’re all kind of Jon Snow’s. We know nothing. We know that he’s a man of his word and he governs by fear (or so it seems), and those are two important qualities to associate with him. That’s what makes him our villain. But what about the people who willingly follow his lead? How do they view their bat wielding leader? If this trailer is any indication then there is definitely a degree of worship. When he walks into a room people take a knee out of respect which is a crazy amount of power that even King Ezekiel doesn’t have. I didn’t see one person in the Kingdom bow down to Zeke and his tiger. But Negan is a much more commanding force then King Zeke. This is a man who has obviously fought to stay alive and knows how ugly this world is, and he uses that for his own benefit.

Last week we saw just how far the arm of Negan and the Saviors stretches with the interactions with the Kingdom. It seems like Negan has his hands in everything at this point which is also something new for, not only us, but for Rick and Company. Every obstacle they have faced thus far has been small and centered in comparison to the Saviors and I think the show has done a terrific job thus far showing us just how imposing this new force is. It will take a lot more then a church massacre to defeat Negan, and that knowledge helps the audience respect him as a villain. The Governor never had this feel. The people of Woodbury followed him but they didn’t worship him. Whatever is going on at Negan’s compound there is some degree of worship, and we know from world history that people are always willing to die for their gods.

Negan isn’t the only thing located at the compound as Daryl will be calling the place home for the foreseeable future. Things look to be a bit bleak for everyone’s favorite zombie killing heart throb and that’s enough to insert a sad emoji face here. I think a majority of this season will see Daryl wrestle with the guilt of Glenn’s death. There is no way that he doesn’t see himself as directly responsible and we know, even though he tries to hide it, that Daryl’s heart is his biggest attribute. He cares for these people and he cares greatly for them which is a type of life he’s never fully explored. I fear that Glenn’s death will close that heart leaving Daryl angry for allowing himself to be vulnerable.Think Roland from the Dark Tower series. You can’t be hurt if you don’t allow yourself to love. We have yet to even scratch the surface of the ripple effects of these two character deaths and I would imagine this week would start to see some of that fallout. I would worry about the mental well being of Daryl. He can withstand whatever Negan throws his way but can he withstand the guilt and anger he throws at himself? I’m not sure. 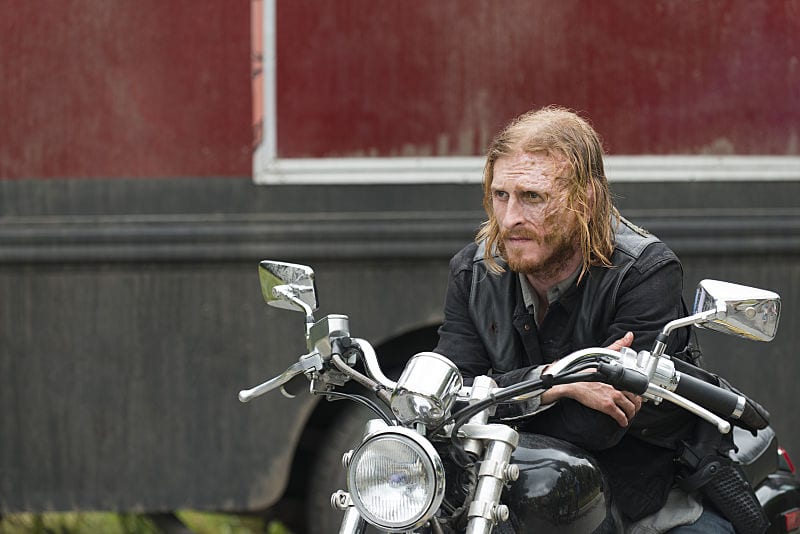 Another character who gets some heavy face time in this trailer is Dwight. From what I’ve been reading, and in discussions I’ve been having with some Geeklings on Twitter, people pretty much hate Dwight and think he’s trying to become the “new” Daryl. Or maybe the Saviors version of Daryl which I guess would be like the Upside Down version. Yeah that’s right, Stranger Things reference.  I understand these opinions even though I don’t fully agree with them. After all he did shoot our heart throb in the shoulder last year and that’s a no-no. You don’t shoot the interwebs love obsession. That’s a bad Dwight. Very bad. But let me throw this at your eyeholes. What if Dwight isn’t that bad of a guy? Whaaaaaaat?! Think about it. When we first saw him his face was pretty whole. Just a regular looking dude. Now though it looks like he’s come in contact with hot bag of dimes. Which begs the question, what happened between whole face Dwight and burned face Dwight? And how does it connect with Negan? Because we have to figure all things connect with Negan at this point.

I think this all circles back to the way Negan rules his people. When we first met Dwight he was on the run, but why? What caused him to try and escape Negan’s compound? Does he see how crazy the man is? Does he owe him money? Did he say something bad about Lucielle? I don’t know (psssst I kind of know his deal because of the comics but I’m not saying anything). If this world of The Walking Dead has taught us anything, it’s we should question most people. No one is ever who they seem to be and there usually is a reason for why they act the way they do. Don’t get me wrong, I’m not trying to defend Dwight but I am trying to get you to think outside of the box a little. Pretty good, right?

There you have it Geeklings. What do you expect to see this week? Can Daryl pick himself up and try and forgive himself for what happened to Glenn? Will he spiral into a black pit of despair? What could life on the compound be like? Who is Dwight and why does he do the things he does? These are all really solid questions to have at the ready when watching tomorrow night. As always if you’d like to continue talking The Walking Dead with me you can find me on Twitter and Instagram @iamgeek32. If you’re looking for more of my word adventures you can visit my blog, I Am Geek. Until then, I’ll see you guys Sunday night with the episode review.