If we’re using the honesty stick, which isn’t really a thing but a writing tool I used to set up this sentence, I think we can say that season seven of The Walking Dead was a bit hit and miss. It started off with that fantastic, tense, I’m going to throw up from stress, premiere (one of the shows best episodes…period), that really set a tone for a different type of season. A season where Rick and Company were at their all-time lowest, defeated at every possible avenue by a man and his death bat. As the season unfolded it became clear that there was no way that the show could keep that type of atmosphere up forever.

Things were all types of bleak and depressing and the show risked chasing away some of the viewers by the massive neutering of their main character. We understood Rick’s lack of action but we didn’t accept it. We hoped that at some point he would snap out of his funk and start using his teeth to rip out throats, and it took Rick way longer than we hoped for to find his mojo. Granted, there was little doubt that our survivors would eventually rise up against Negan, with or without Rick, but season seven seemed more concerned about telling us about the revolt than any actual revolting.

Until the finale that is, where Rick essentially got his groove back and through the help of The Kingdom, and a well placed Tiger, was able to put Negan and the Saviors on notice. Things were going to be different. No longer would these communities sit idly by as Negan reaped the benefits. It was time for a war which was part of my frustration with season seven. The focus seemed more for this war to happen in season eight and a number of the back episodes just felt like they were spinning wheels instead of progressing story. When the first shots were finally fired it was exciting and vindicated a seasons worth of broken Rick, but then it was time for the show to take vacation as we the audience wondered what would come next. Would season eight be another slow build season or would we finally get the war we were promised? 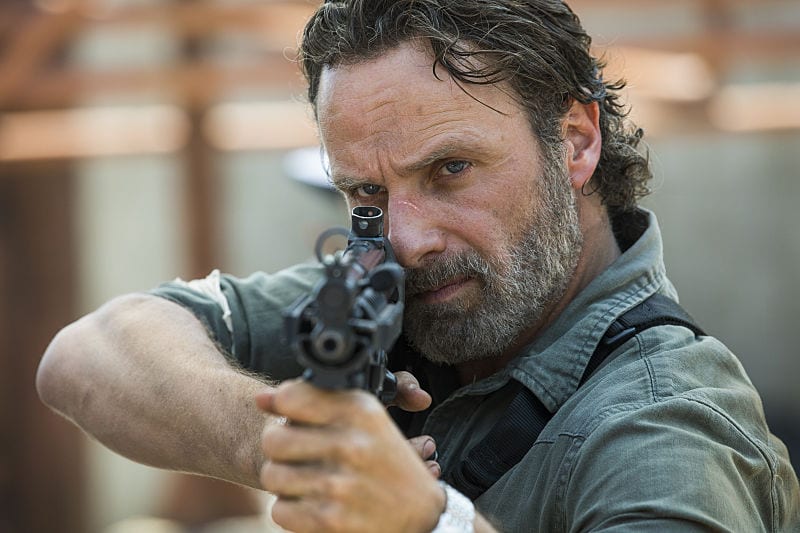 The good news Geeklings, is war is here and the season eight premiere, the show’s 100th episode, seems to be a return to form. The Walking Dead does it’s best work when it’s focused on the main storyline thus allowing the other threads to weave in and out, and after a few seasons of splitting up narratives, it seems that everyone is finally on the same page.

Last night’s episode, “Mercy”, wasn’t the shows greatest (I still think that title belongs to “The Day When You Won’t Be” or “Killer Within”) but it gave the fans everything that we love about the show. Hope. The hope for a better tomorrow, and right at the center of ushering all that hope was Rick Grimes, our fearless leader.

The man who has warded off governors and cannibals, whose taken over an entire community or willingly ignores the fact that his daughter is probably his best friends. Rick Grimes is the heart and soul of The Walking Dead and in within the first ten minutes, it was obvious that he was back. Neutered Rick would be a thing of the past.

That’s not to say that Rick didn’t maintain the brutal lessons that season seven taught him. The arrogance of Rick Grimes seemed to be a little more muted as Father Gabriel helped reinforce the fact that this wasn’t about him. This was about the future. Rick’s impassioned speech about shaping the world for a brighter tomorrow wasn’t there just to inspire his followers. That speech was intended to show us a different side of Rick Grimes. A man who for six and a half seasons did things his way and alone. A man who talked about creating a better future for his children but still willingly ignored the principles needed to provide that. Here was a man who didn’t play well with others… playing well with others. The bond between the Hilltop and the Kingdom is essential for victory against Negan and the Saviors and we now have a Rick Grimes who understands that it’s okay to rely on others. 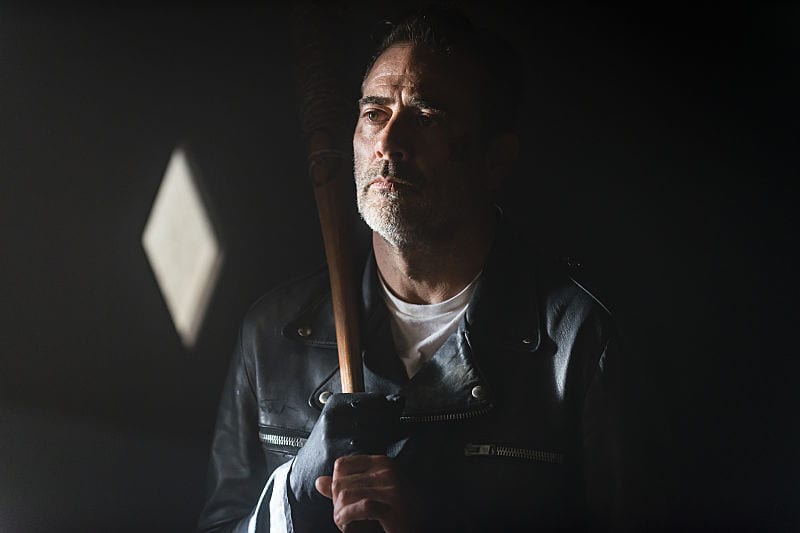 This war isn’t going to be easy, not as long as Negan exists, but Rick and Companies first blow was calculated brilliantly and executed almost to perfection. What made it work so seamlessly is that each group had a role to play. Everyone had their part in directing the herd of zombies towards the Sanctuary, and looking past Daryl’s ridiculous ability to hit bombs while shooting backward on a motorcycle, they all worked well together. Focused on one goal it seems that these three communities could actually provide this future the show has been promising us for seven seasons. Although, not all the communities are on the same page as Gregory had made his way to the Saviors claiming that the Hilltop was with them.

The only thing is Gregory is so far out of touch that he doesn’t understand that he’s already lost the Hilltop. Jesus screaming “The Hilltop is with Maggie” was not only one of my favorite moments from the premier but really extenuated the shifting in power from Negan to these rogues communities.

None of this means that we should count Negan out though. Quite the contrary. What I love about Negan is how calm and cool he is. Walking outside and seeing an assault team hidden behind steel fences could have freaked him out but Negan ran with it. At no point did he seem afraid or concerned. Sure, Rick was going to lash out because those are things that happen during wars, but he still doesn’t understand what he’s up against.

To Negan, Rick has no grasp on just what the Saviors are capable of. Or how many of them there are. Rick is leading a revolution on hope and Negan is fighting back with statistics and fact. At some point, something is going to have to give and Negan’s cool confidence actually allows for doubt in Rick’s ability to pull this off. I for one love Jeffery Dean Morgan on this show and find his Negan to be one of the most refreshing aspects of The Walking Dead. I know we’re supposed to view him as a villain but I can’t help but see him as the perfect yin to Rick’s yang. Just think, if the show started 99 episodes ago from Negan’s perspective how would we feel about Rick?

The fact is, Rick caused a major blow in his first assault. The Saviors are currently trapped within the Sanctuary as they are surrounded by the herd of walkers. The shooting of the windows was the noise needed to draw the walkers closer to the compound but one has to believe the noise and the smell of these undead are going to make the inhabitants a bit stir crazy. At what point will they revolt against Negan, who just so happens to be stranded outside the compound with Father Gabriel. I want to feel bad for Gabriel but I just can’t. I get that he’s trying to atone for his past sins but saving the human armpit that is Gregory was a dumb move and now has him locked in a room with Negan and Lucille. I hope he has the right pair of pants on. 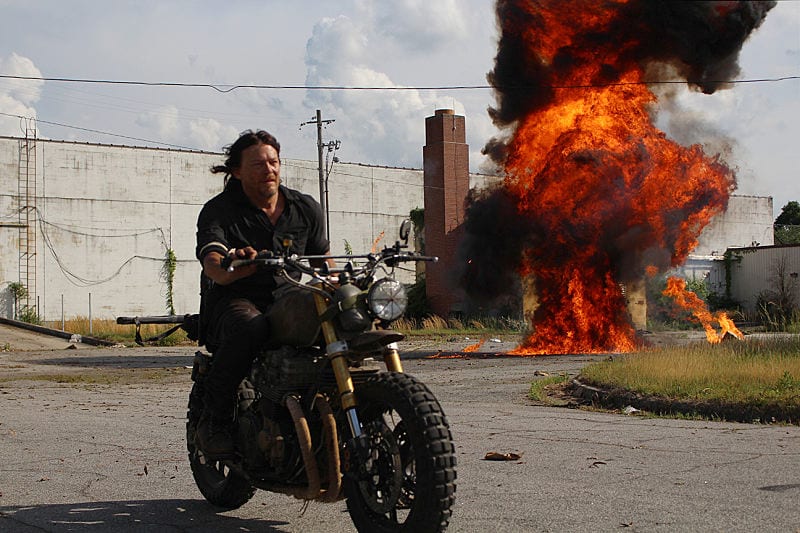 One more thing before I leave you, and no it’s not Tara’s ability to discover Twizzlers suddenly. There’s a giant elephant in the room and his name is Old Man Rick. Just what exactly is he? Is he a dream? Is he a flash forward? Alternate timeline? Someone tell me! Well, I know (yay comics) and won’t be telling you but I feel that it’s important to point out that a large portion of this episode was told in a nonlinear story method. It wasn’t as overt as a Tarantino film but there were a number of things pieced together out of sequence. Like why is Rick crying in those scenes?

Could that be something that happens after the assault on the Sanctuary or maybe it’s that assault with the smoke grenade? Maybe it’s something we haven’t even seen yet. Is Old Man Rick and his communities love for Weird Al music something that’s going to happen in the future or is this a construct of Rick’s mind to keep his sanity. An imaginary life that validates what he’s fighting for? Remember, this is a man who answered a phone and talked to the ghosts of all the shows dead characters. Things to think about.

There you have it Geeklings, The Walking Dead is back and seems to be on track for one kick-ass season. What did you guys think of the premiere? Were you happy to see Rick take the fight to Negan? Do you feel like this season will be less filler and more action? Why do you think Gabriel prevented Rick from staying to kill Negan? Sound off in the comments below. If you’d like to talk more The Walking Dead with me, and you should, you can find me on Twitter @iamgeek32. In the meantime, strap yourself in as it looks like the future is bright for season eight. Maybe it’s bright for our survivors too… I guess only time, and war will tell.

Home » Featured » ‘The Walking Dead’ Review ‘Mercy’-War For the Future