‘You let me live and then I was there to help Aaron and Daryl. See, if I, if I wasn’t there, if they died maybe those Wolves wouldn’t have been able to come back here. I don’t know what’s right anymore. ‘Cause I did want to kill those men. I seen what they did, what they would keep doing. I knew I could end it, but I also know that people can change. ‘Cause everyone sitting here has. All life is precious, and that idea, that idea changed me. It brought me back and keeps me living.‘

Morgan Jones is one of the most complex characters in pop culture, and the fact that his character is part of The Walking Dead speaks volumes. The series brings a very human aspect to a world where the odds are stacked against the living. This opens a platform for some strong characters to evolve at the same time that others are breaking down, and some, some are stuck somewhere in between.

Morgan Jones is also one of those characters, the ones who have found themselves treading lightly between fierce strength and the drive to live and a crushed spirit having suffered unimaginable loss. While you’d sort of think, or hope, that it would get easier as time went on – all things considered – it’s not and Morgan’s spirit has been one of the most open and honest of the series in its entirety. 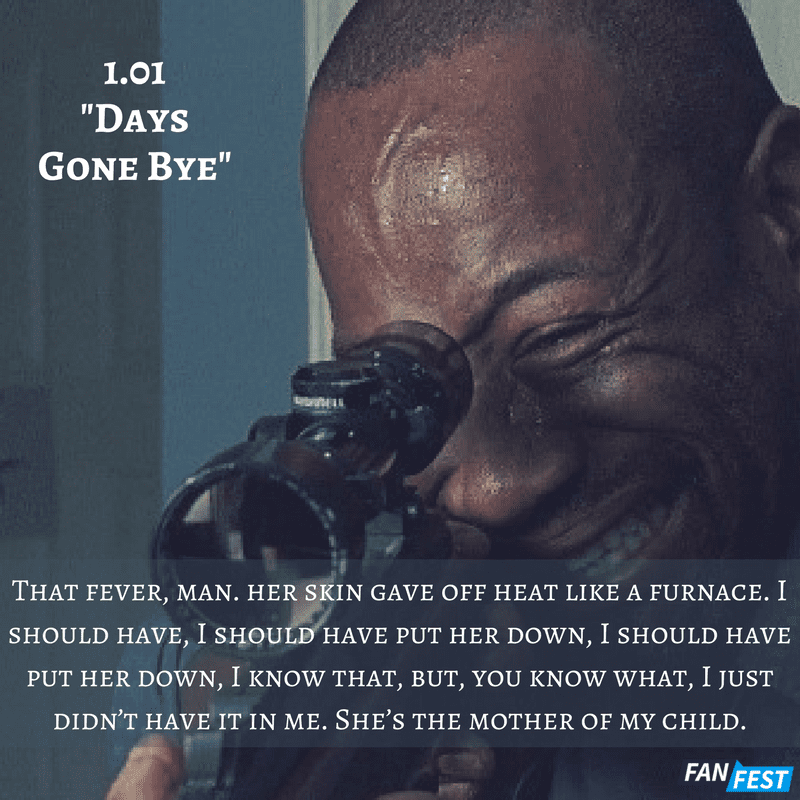 Morgan was the first to explain to Rick Grimes what was happening in the ‘new world’ he was subjected to after he woke from his coma. It was a heavy weight to carry, but he did it, and he stayed strong for himself and his son before anyone else. That didn’t stop him, however, from staying strong for others too.

At least, at first. Then, Morgan encountered another great loss and when we saw him again, he was a changed man. In fact, he was a bit deranged, but you couldn’t blame him. He appeared in season 3 and was on a personal mission to rid the world of walkers when his path crossed that of Rick’s again. This time, things were very different. Morgan said he didn’t know anyone anymore but Rick made him remember. 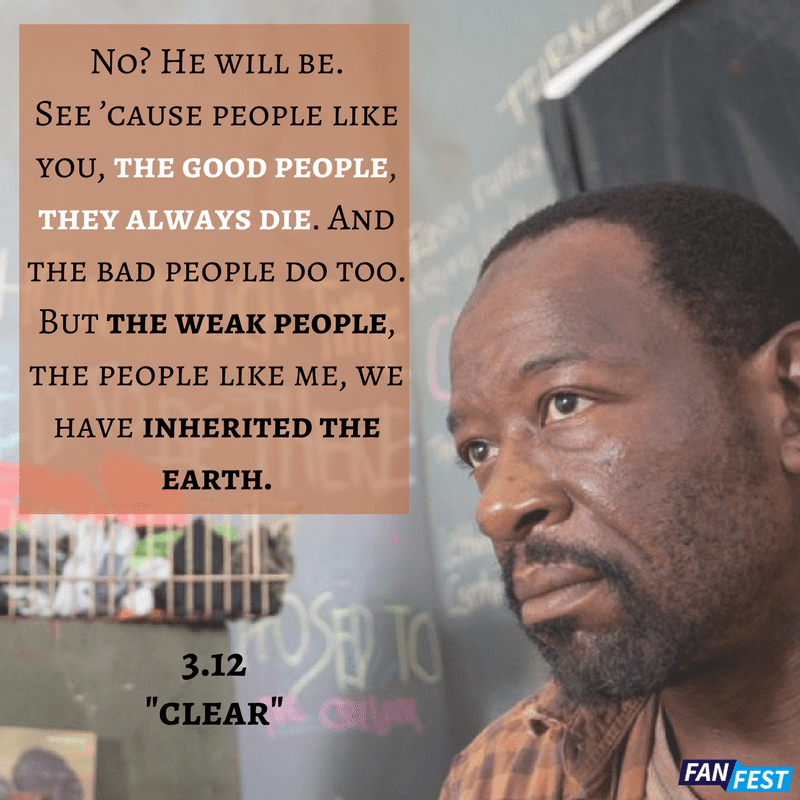 It’s then that we see Morgan in one of his most vulnerable states. He’s lost every part of who he was and he doesn’t know what’s left for him in this apocalyptic world. He pleads for Rick to kill him after he stabs Rick in the chest, but Rick understands. Their bond, while not heavily focused upon, is one of the most critical in the series.

It’s then that Morgan says he can’t stand to see any more death. He also meant that he couldn’t open himself up to caring about anyone again, he’s been closed off to love because it’s just too painful.

However, Morgan once again becomes a killer, and it’s when he sees Rick in the same situation that he laughs and realizes it. He uses a staff now and doesn’t set out to take lives, but when necessary, it’s him against the world. 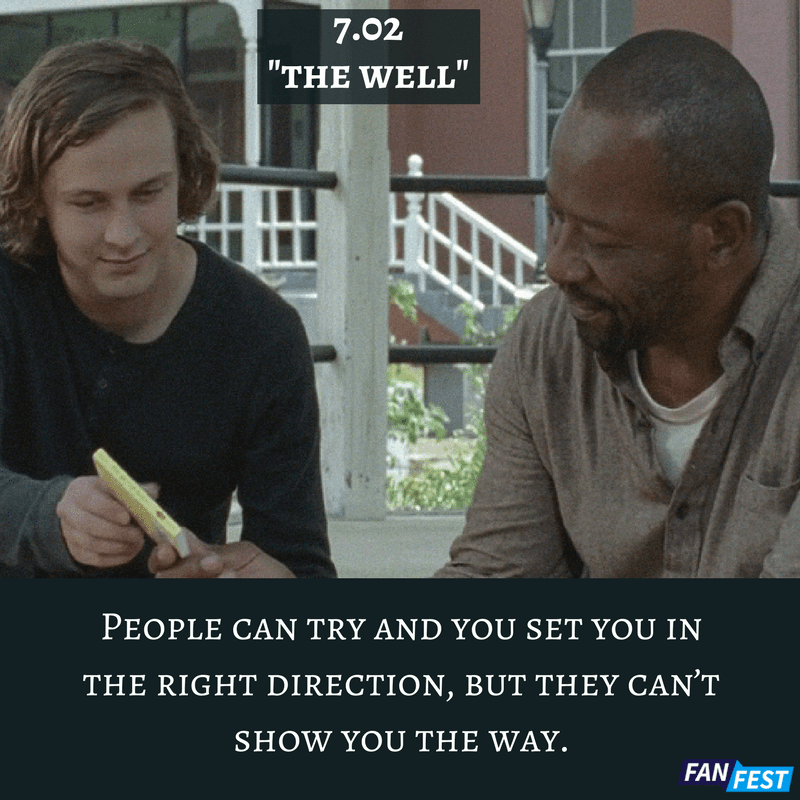 This is where Morgan’s deepest struggle is born, can he live with himself when he’s taking lives or is it easier, on his conscious, to put himself at a greater risk to avoid more blood stains on his own hands?

This question is what makes Morgan one of the most complex characters in pop culture. Yes, everyone battles the good vs evil within themselves, but never in a situation like the one of The Walking Dead. It seems that you’d protect yourself no matter what, with many not finding a point in trying to spare themselves anything but eternal damnation.

Morgan, he still sees a place outside of this living hell for his soul to rest and he sees that place for others too. This battle leads Morgan to highs and lows, points of feeling something close to alive and moments of feeling like a shell of a man.

However, he always finds himself wanting the death to stop. So this season, fans are seeing perhaps the most desperate version of Morgan that we’ve seen so far. He’s reeling from the death of Benjamin and the set up that got him killed. He’s dealing with the fact that he strangled Richard and the knowledge that things have never been as bad as they are, right now. 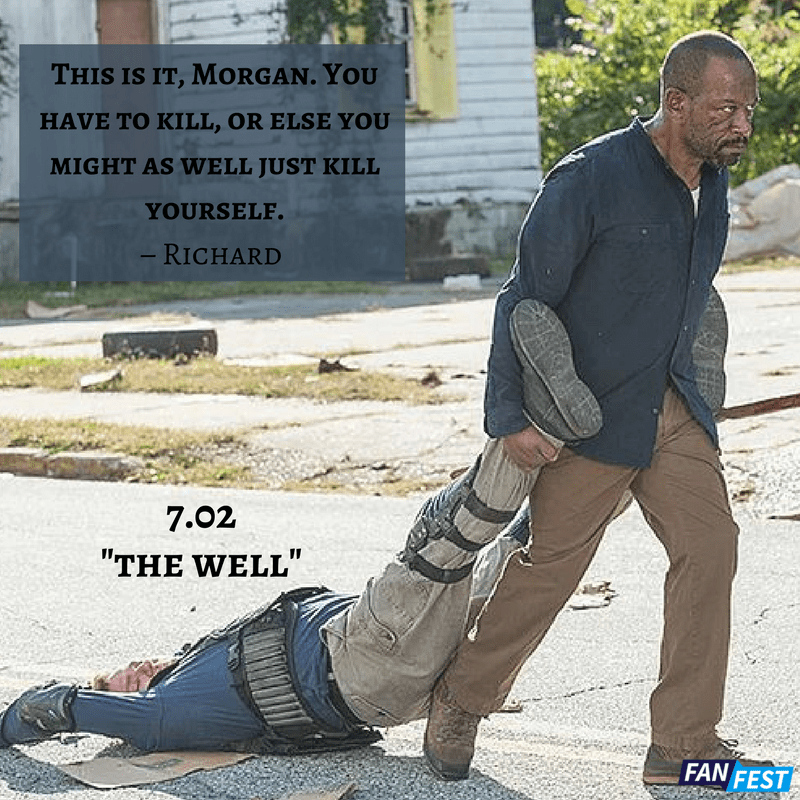 In one of the most obvious ways so far, this is seen where Morgan and Jesus spar in the most recent episode. A moment both Lennie James and Tom Payne were incredibly proud of. It shows that Morgan has realized that the pain and the hurt aren’t just because of the lives lost, it’s because he feels that they’re no better than the Saviors. He feels that they’re no better than anyone they’ve encountered that ended up causing them so much pain.

It’s realized again when Morgan snaps out of the place he was in during his fight with Jesus. He blinks and the emptiness in his eyes is gone, his spirit – while dull – returns. Outloud, he brings himself back before lowering his staff and saying that he knows he’s not right…but that it doesn’t make him wrong.

The heartache on his face is evident once more, and it breaks the hearts of all of us to watch before he says he can’t be part of this anymore. 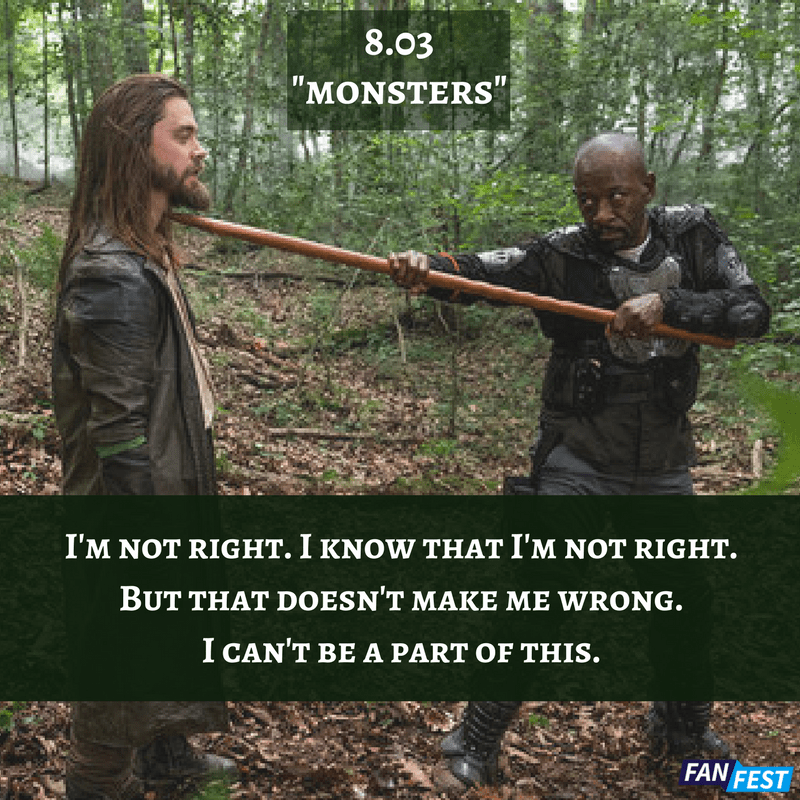 However, he also stands not just for, but as, their light. His spirit isn’t broken, even if he feels like it is, and the road for Morgan could truly be a beautiful one if he can just make it through.

Lennie James recently spoke about Morgan and what he’d like to see from him in the next 100 episodes and his answer was one we all want for Morgan more than anything. He wants to see him find love again, to be open to the idea of love again.

After everything we’ve seen Morgan go through, we want that, too.