Almost 20 years into the Marvel Cinematic Universe and there are still many questions that are left to be answered. Is The Incredible Hulk fully canon – and if so, where’s Betty Ross? What happened in Budapest? Will the Avengers ever be reunited with Agent Coulson? Is there some important backstory to Nick Fury’s eye?

That last question might not seem AS pressing as some other MCU questions; but if you rewatch Captain America: The Winter Soldier, you might begin to have a different opinion. Pair this with the recent revelation that the upcoming Captain Marvel film will feature a younger, pre-eyepatch Nick Fury and our theory senses start tingling!

So this week we’re bringing Theory Thursday back to see if – and how – Captain Marvel could explain Nick Fury’s injury as well as overwhelming trust issues. 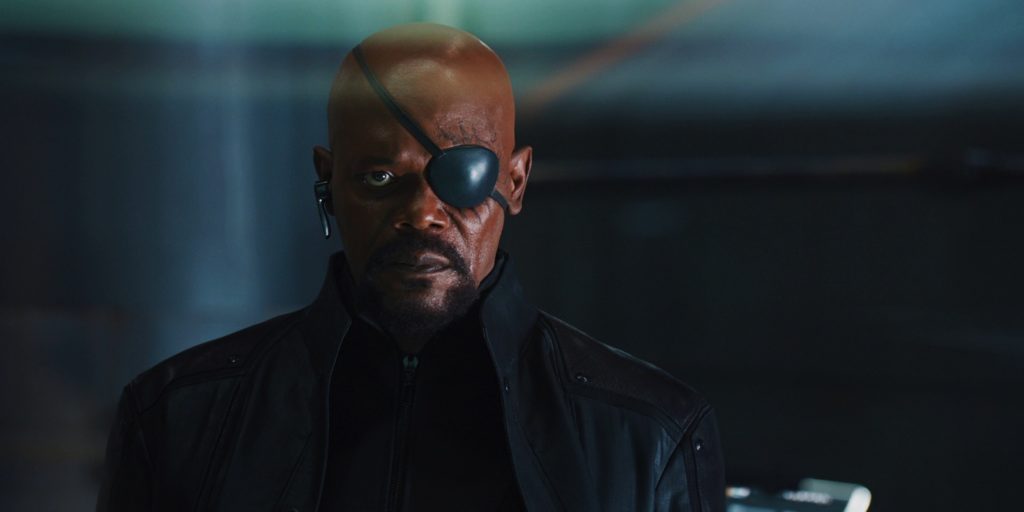 So back in Captain America: The Winter Solider, while in conversation with Steve Rogers, Director Fury remarks that “the last time [he] trusted someone, [he] lost an eye”. Pair this with the knowledge that a “pre-eyepatch” Nick Fury will be present in Captain Marvel and we start to wonder if the one who betrayed him was actually Captain Marvel herself. Jenna Anderson proposed this theory on Comicbook.com and it could certainly explain why Captain Marvel (whose film is set in the 90s) has up and vanished, as well as why Nick never thinks to call her in for backup. This “bad blood” between them would explain a lot,  but I’d like to propose a different explanation for Nick Fury loosing his eye in Captain Marvel.

Nick Fury Was Deceived By A Skrull:

That’s right, you heard me! A few weeks ago we also learned that the main villain(s) of Captain Marvel will be the Skrulls. Now if you’re familiar with the Skrulls, then a little lightbulb is probably going off in your head right now. If not, allow me to explain. The Skrulls might looks like an alien race of Green Goblins, but they’re much more than that. You see the Skrulls are not just the nemesis race to the Kree (who we’ve seen a few times now in the MCU), but also an alien race that is capable of shapeshifting. In fact, one of the most popular Skrull stories is about them kidnapping and replacing heroes with Skrulls.

Honored to find out this morning that my #skrull designs were shown by the #mcu at #comiccon2017 At first I was afraid that the artwork got leaked and I was a bit panicked, but fortunately it was done on purpose 🙂 I did these designs while working in house at #marvel on #captainmarvel for the very talented @andyparkart You should all check out his Captain Marvel design. It was also released and is amazing! #marvelcinematicuniverse #marvelmovies #marvel #skrulls #superskrulls #aliens #badguys

Whatever the case may be, Nick Fury’s immense trust issues now make perfect sense as he knows full well that anyone – ANYONE – could be a Skrull in disguise! His eye is a constant reminder that everything is never as it seems; and that even his closest ally could be an evil alien bent on replacing the human race one person at a time.

But what do you think? Will Nick Fury lose an eye in Captain Marvel or will that story be told another day? Was Captain Marvel herself the perpetrator? Was it a Skrull? Has Nick Fury actually been a Skrull this whole time? Sound off in the comments below!