Spidey fans may have been thrown for a loop last week when we got the spoiler-filled Spider-Man: Far From Home trailer that claimed the infamous Mysterio (aka Quentin Beck) was not only a S.H.I.E.L.D.-recognized hero, but also from a completely different Earth. Now if you’re not familiar with this character, be sure to check out this week’s Marvelous Monday article where we detail just how much of a threat he’s been to Spider-Man over the years. But what about this Mysterio? Is he not actually the villain of this film? Is this a hero to villain origin story like we got with Baron Mordo in Doctor Strange? Will we start to see an MCU multiverse in the films?

There’s a LOT to dissect and theorize on; but I’m going to split it all up into 3 Theories. Which one do you find the most plausible? Well, you’ll have the let me know at the end. But for now, let’s kick off with the most obvious one.

Despite what the new trailer claims, many people have pointed out how the whole ‘snap tore a hole in reality’ logic doesn’t really hold up when you look at it. After all, the snaps took place in Wakanda and New York. So why is the tear in reality happening in London and Venice? Add in the fact that Mysterio is a notorious illusionist and hypnotist, and it’s not exactly that hard to believe that he’s fooled onlookers and top S.H.I.E.L.D. agents alike.

But what about those giant monsters (Elementals) you ask? It’s likely that they’re pure illusions with some special effects to further trick the senses of those around them. Spider-Man might eventually realize this at some point during the movie and discover the monsters aren’t really there. Now let’s throw in the fact that Mysterio’s costume is VERY reminiscent of both Thor and Ironman – the hero of the world right now. Hell, this resemblance is even directly called out in the first trailer. If Mysterio was truly from another Earth, it’s a pretty big coincidence that he just happens to look like a fusion of a literal God (and former ruler of ‘New Asgard’) and the recently deceased savior of the world. He’s picked his audience and now he’s capitalizing on playing the role of hero. 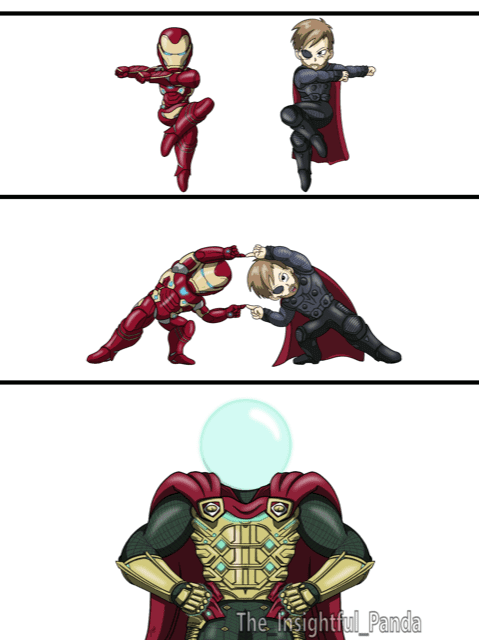 And don’t even get me started on how personal this could be for Spider-Man. The trailer seems to show some scenes where Peter is confiding in Beck and – dare I say it – looking to him for advice like a new mentor. When the betrayal is revealed, this will make things exceptionally personal for Peter as he’s seen firsthand the sacrifices real heroes make. Peter will want to shut this wannabe down hard. The only problem is, considering all those previous scenes, Beck would not only know Spider-Man’s identity, but his weaknesses too. Much like how Phase 1 began, will Phase 3 end with a very public reveal of a secret identity?

Theory 2 – A Fresh Start… for Better or Worse

Before we kick off this theory, we have to address a criticism I brought up in Theory #1. If the snap did cause a hole between dimensions, why is the hole happening across Europe (London and Venice) when the snaps happened in New York state and Wakanda? Well, the answer to this could potentially be found in both Thor: The Dark World and Doctor Strange. Remember that London was the site of the ‘convergence’ , where all nine realms intersected in Thor: The Dark World. Yes that happened years ago, but perhaps the two snaps caused the rift to start to reopen and spread further – explaining why it moved down to Italy. Additionally, remember that London – like Hong Kong and New York – has a Sanctum. Seeing as the most recent dimensional breach was in Hong Kong by Dormamu, perhaps the Sanctum locations are paired with places most at risk for dimensional threats, thus explaining why London is a site of a dimensional breach.

As for Mysterio himself, he might indeed be from that other world; but that doesn’t necessarily make him a hero. This theory would have Mysterio helping S.H.I.E.L.D. and Spider-Man like we explored in the first one; but here the reveal is slightly different because we learn he was actually a villain in that other world. Maybe he came here to put a larger plan in play and is evil to the core (Theory 2a) or maybe he actually came here to start a new life and put villainy behind him (Theory 2b). Though if Marvel is indeed introducing a Multiverse, this would be the PERFECT opportunity to make it the ‘Spider-verse’ and have the big reveal come at the hands of Beck’s world’s Spider-Man. 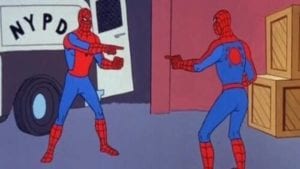 Sure Beck tells Spider-Man in the trailer that his world could use someone like him, but that could be a preemptive lie to dissuade any future questions of the sort by Peter or maybe he’s just saying there’s no one like Peter (personality-wise instead of superhero-wise). Either way, this twist would lead to an interesting tale no matter which path it takes (Theory 2a or 2b). Sure Beck’s Earth’s Spider-Man could come in and team up with our Spider-Man to take him down and open up a whole new world (and maybe give us a McGuire or Garfield cameo). Though I personally would love to see Theory 2b play out. What if another world’s Spider-Man came in to unmask Beck, but our Peter Parker still believed in Beck? We could get a Spider-Man vs Spider-Man fight and it’ll ultimately end with Mysterio making some sort of sacrifice to prove he meant it when he said he wanted to be a hero. We’ve got a twist, meaningful character development and it would be a great way to establish the core MCU Spider-Man as the main Spider-Man who could teach others to have more faith and be their best selves.

Theory 3. I Just Wanted To Help

We learn in the trailer that Beck and these – seemingly – 4 Elementals are from another universe. Question though, why do 4 out of 5 of these breachers look like primordial beings and the 5th a charming man who epitomizes science and magic? Something doesn’t fit. Beck and these Elementals don’t look like they come from the same universe or even point in time. Now sure we could find out that each of these Elementals has a human form in the film, but I want to go a different route with this one. What if the snap didn’t cause the dimensional breach? What if it was Beck.

The last time we had an Avengers film, it led to some pretty big fallout which (partly) served as an origin story for a very big villain rewrite. I’m of course talking about Zemo in Civil War, who was motivated to destroy the Avengers because he lost his family in Age of Ultron. What if Beck is about to get similar treatment? Whatever theory you go with, Beck would have to be pretty brilliant. So what if ‘the snap’ caused Beck to lose his family and thus he began experimenting on a way to bring them back. What if those experiments caused the breach? Beck would feel responsible and want to help, but he might also be too scared to admit it was him. Perhaps someone he knows had a history with S.H.I.E.L.D. So how could he possibly explain that he was an expert on what was happening without actually revealing that he was what caused it to happen? Simple, he’d lie and say that we was part of the effect.

Again, this would explain why Beck is set on leading the charge against these monsters. Though the drama of this would come when Peter discovers the truth – that Beck isn’t actually from the other world and was actually involved in the accident. Beck would beg Peter not to tell because if he did, there’d be consequences for him; and that they should just focus on fixing things. But of course Peter would blab. Besides being a fun nod to how Tom Holland himself always lets secrets slip, it would set up a lot of tension for the film and would once again leave Beck’s path up to the discretion of the writers. Will there be tension, but Beck ultimately sacrifices himself to save the day? OR could this be the motivation Beck needs to destroy Spider-Man. Short term: maybe since Peter told Beck’s secret, he’d tell Peter’s. Long term: maybe Beck would find five other people who feel their lives have been ruined by Spider-Man and start his own little gang – a malevolent half dozen, an evil three duos or some other way to say Sinister Six. 😉

But you tell me! Which of these theories did you find the most plausible/ exciting? Do you like a combination of some of these? Do you like a completely different theory? Whatever path this film takes, we know there’s more to Beck’s story than meets the eye. Spider-Man: Far From Home swings into theaters July 2, 2019.