Our original Laurel might be dead, but that’s not enough to stop Earth-2 Laurel from causing some trouble. In past articles, I’ve spoken about where Earth-2 Laurel’s story could go; but we’ve come a long way from the MidSeason Premier of Season 5 and my first Theory Thursday. Though whereas a lot of my initial thoughts/ hopes were debunked, there’s also a lot of it that has been magnified in recent episodes – especially after the Season 6 premier.

So this week for Theory Thursday, we’re not trying to figure out Earth-2 Laurel’s future, but rather her past. How did she get her powers? What changed? And why does she go back and forth between showing Quentin concern and showing no love whatsoever? Was it getting shot or something more? Let’s take a look!

Of all the Earths we’ve met thus far, Earth-1 and Earth-2 are the most similar. Maybe this means that the further apart the Earths are, the more different they are. On Earth-2 for example: Barry didn’t lose his mom; Cisco, Caitlin and Ronnie still have the same powers but are evil; and Wells is basically what Wells should have been on Earth-1 before Thawne stepped in. Everything is basically the same except for very minor differences. As we move further away (ie: to Earth-3), the changes get bigger. For example, Henry Allen’s mother is never married, keeps her maiden name and gives birth to the speedster version of him named Jay Garrick.

So what do we know about the Arrow story on Earth-2? In the Season 2 episode of The Flash titled “Enter Zoom”, we heard an Earth-2 news briefing that revealed that Robert Queen was the one to survive and become Starling City’s Arrow while Oliver died on the Queen’s Gambit. So would this have an impact on other character’s storylines? Absolutely!

A Not So Happy Ending – Alcoholic Quentin, Forlorn Laurel:

If we’re to assume that these are the same characters with different choices being made for them, then what we know about these Earth-1 characters can give us some insight into their mentality before the accident. For example, Laurel revealed to Oliver on her deathbed that she never stopped loving him. This could be true of Earth-2 Laurel and would explain why there were times when it seemed Oliver genuinely got through to her. Perhaps there is still hope for this Laurel, but that’s not the point of this article. The question at hand is what changed between Laurel and Quentin on Earth-2? Well again, the answer can be found by looking at certain traits we already know about the characters on this Earth.

From Season 1 to last season – and even Season 6 – we’ve seen Quentin constantly struggle with alcoholism. We’ve even heard Quentin recall the time immediately following the Queen’s Gambit and how it was Laurel who saved him. Well, what if Earth-2 Laurel wasn’t so lucky? As the show stands right now, there are two routes this could have taken – depending on which reaction of Black Siren you put emphasis on:

Then again, both can be reconciled. Maybe Earth-2 Quentin was an abusive drunk but upon meeting the Earth-1 version of Quentin, Black Siren thought this was “a chance to have the father she lost”. But after he shot her, she now just sees him as the same hopeless case she knew on Earth-2.

Whatever path that relationship took, the aftermath is pretty certain. Having lost her love, her sister and her parent(s), this Laurel would have lost everyone dear to her in the span of a few months/ years. With nothing left in Starling City but bad memories, she moved to Central City. Perhaps the climax of her despair (or hatred of her father if Option #2) happened just as the particle accelerator went off – resulting in her screaming and gaining powers just like what we saw happen to Dinah on Earth-1. 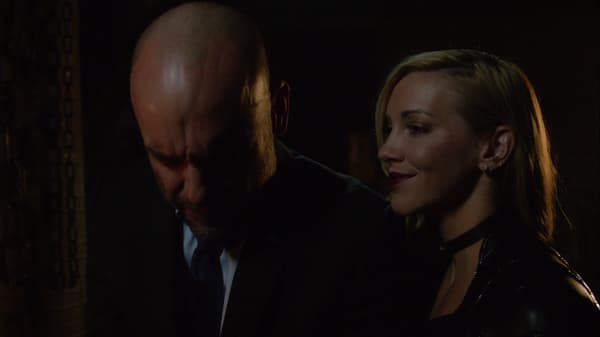 Now this is all just a theory, but there is a lot of support both in evidence and overall tone. Additionally, this would explain another one of Black Siren’s habits: “loyalty to the wrong people”. Whether in a vulnerable position or being fed up with so called “good guys”, her next interaction would cement her new path; and sadly that first person was probably Zoom. Follow this up with her continuously helping Chase because “he freed her” and now her working for this new mystery person for reviving her, we see that even Earth-2 Laurel has Earth-1 Laurel’s same sense of loyalty. Sadly, it keeps being used by those who prey upon her hatred and hopelessness.

Maybe Oliver can eventually get through to her; but with Earth-1 Quentin having shot her, that’s going to be hard. If there’s anything that could bring this Laurel back to the side of good, it might require Quentin to make the ultimate sacrifice – which while heartbreaking would also be the ULTIMATE final chapter for this man who we’ve known all along to be a caring father who’d do anything to protect his daughters.

But what do you think is it Earth-2 Laurel’s backstory? Do you this Quentin can make it right or will Earth-2 Laurel ultimately do him in? Sound off in the comments below!