Spoiler Alert!  The following article contains spoilers from the season 8 premiere of The Walking Dead.  Only read on if you are caught up with the series.

Season 8 of The Walking Dead kicked off on Sunday with an explosive and intense episode.  In the 100th episode, we finally saw Rick and the folks from Hilltop, the Kingdom and Alexandria come together to take a stand against Negan and Saviors. It was the first attack and battle in what’s building up to be the all-out war storyline from the comics and, man, did it feel good to watch our group return to their old selves again.

The 100th episode of the series felt like a return to the early seasons of the show but as it turns out, this is true in more ways than one.  Not only is our group bouncing back from the agonizing losses we suffered in season 7 but, intentionally, there were several callbacks and Easter Eggs referring to earlier seasons of the series.

1 – Old Man Rick vs. Rick waking up from his coma

The episode first starts with our first images of an old man version of Rick Grimes.  Rick can be seen laying in a bed, all grey and full-bearded.  A bouquet of flowers sits in a vase in his room as well.  The flowers are vibrant, beautiful and full of life.  As we focus on Rick in the bed, he slowly opens his eyes to the sounds of music and voices before the scene cuts away.  Does this all sound vaguely familiar?  It should!  This scene directly parallels the very first episode when Rick awakens from his coma.  In the first episode, we see him in his hospital bed.  The flowers in the vase next to him have turned brown, shriveled up and died.  He awakens to the sound of nothing in the hospital room.  While old man Rick seemed at peace when he woke up, coma Rick was clearly distraught and confused.  The old man Rick scene is the complete opposite of what happens in the hospital in the first episode but, it was a brilliant call back for the 100th episode.

Director Greg Nicotero spoke about this scene during the cast and crew’s appearance at New York Comic Con earlier this month.  In fact, the audience in attendance at the panel got a sneak peek of Carl’s walk through the gas station before anyone else did.  This scene was a shot for shot reiteration of Rick’s walk through the gas station in season 1.  You can check out a video of a side by side comparison of the two scenes HERE. 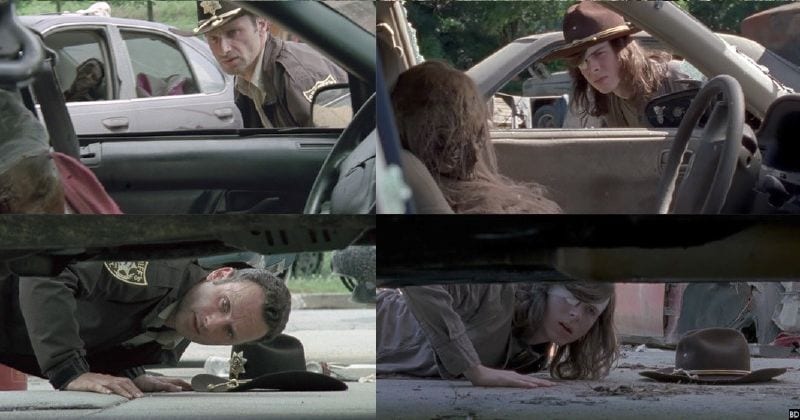 While Rick is walking around the gas station in season 1, he encounters his first walker affectionately named by The Walking Dead fandom, teddy bear girl played by Addy Miller.  Some keen-eyed fans may have noticed a pretty awesome tribute walker which appeared during the season 8 scene at the gas station.  The walker had the same facial wounds and deterioration that teddy bear girl had in season 1.  Coincidence?  Of course not!  Check out this cool post from Addy Miller’s Twitter page showing the comparison between the two.  Pretty cool!

Now that we have our badass version of Rick Grimes back in season 8, it would appear that he’s using some of Negan’s own tactics against him.  When Rick and his army bust into the Sanctuary and begin conversing with Negan and his group, Rick eventually runs out of patience and says to Negan, “You’re going to make me count?”  Rick then begins to countdown as Negan can be seen smiling in the background.  He only makes it to 7 before opening fire on the Sanctuary.  Did that line sound familiar at all?  It should because it’s pretty much the exact same thing Negan says in the season 7 premiere episode.  Negan has Rick and Carl both on the ground in front of him.  Negan instructs Rick to pick up his ax in order to chop off Carl’s arm.  While Rick continues to hesitate, Negan eventually loses patience and says, “Oh my God.  Are you going to make me count?”  Negan then begins to count as Rick agonizes over what to do.  This callback to season 7 is a smart way of showing how the tables have turned.  Rick has got his confidence back and he’s ready to take on Negan and his crew.

Maybe it’s just because he’s the fastest one on his motorcycle or maybe it means something deeper in The Walking Dead universe but, the season 8 premiere gave us another moment where Daryl Dixon is leading the walkers, pied-piper style, to a location.  During season 6, Daryl and his speedy motorcycle were instrumental in drawing the massive herd away from Alexandria and now, in the season 8 premiere, he was, once again, the leader of the walkers, drawing them straight to the Sanctuary.  Go, Daryl!

The season 8 premiere ended with Father Gabriel in a precarious situation.  After he was abandoned by Gregory amidst the gunfire and with the walker mob approaching, Gabriel ran for the first door he could find – the door to a trailer.  He makes it into the trailer safely only to find Negan inside which could mean a whole world full of trouble for Gabriel to begin with, however, more trouble lurks just outside the trailer.   An aerial shot shows the trailer becoming swarmed by the walker herd.  This scene is strikingly similar to season 1 when Rick, who is about to be overtaken by a mob of walkers, seeks refuge inside an abandoned tank.  While in the tank, a voice comes over the call system – Glenn’s voice.  We then see the same aerial shot showing the tank being surrounded by the walker mob.  In season 1, Glenn’s voice was Rick’s saving grace.  What does that mean for Gabriel and Negan?

And lastly, though it’s not exactly a callback, as an added bonus, The Walking Dead reused one of its first walker actors ever to grace the screen in the season 8 premiere.  Actor Joe Giles was one of the first walkers on the series and Greg Nicotero spoke to Entertainment Weekly about this tribute walker:

“The electrocuted walker that has been fused to the electrical wire — we used Joe Giles who was one of the first walkers in the original show, the one that gets out of the bus and follows Rick down the street. I thought it would be cool to go back to our roots and use some of the same walkers that were in early episodes again as just a little tribute.”

With all these callbacks and Easter Eggs for fans to find, if there was ever any doubt regarding the thoughtfulness of  The Walking Dead episodes, this episode should put that doubt to rest.  Each callback and tribute to seasons past made the 100th episode that much more special for the super fans out there who noticed these little nods.

Did you pick up on all of these callbacks?  Did you notice any others within the episode that we don’t have listed here?  Tell us about it and tell us your thoughts in the comment section below.

The Walking Dead is back with all new episodes Sunday nights at 9 PM EST on AMC!

The Walking Dead Review- War For the Future

‘The Walking Dead’ Censored an F-Bomb and We All Missed It!