Spoiler alert!  The following article contains spoilers from the latest episode of The Good Doctor.  If you haven’t watched the winter finale episode Sacrifice yet, read on at your own risk!

Wow!  Ok.  Where do I even begin after that intense winter finale episode!  This episode was unlike any other that we’ve seen before from The Good Doctor.  While the series has made its mark by tugging ever so gently on heartstrings of fans, tonight’s episode was uncharacteristically heavy, extra emotional and downright heartbreaking.  That cliffhanger ending will have fans talking throughout the entire winter break until the series returns in January.

Before we get into the nitty-gritty of the episode, first, I’d just like to take a moment to shout out to the phenomenal cast, the incredible directors, the incomparable writers, the stellar producers, the amazing crew and basically anyone involved with the series.  The Good Doctor is television at its absolute best and it’s a reflection of all those involved with its creation.  Bravo to all!

Now, on to Monday night’s episode!  The winter finale sure shook things up at San Jose St. Bonaventure Hospital leaving no character’s story arch unscathed.  Dr. Neil Melendez’s relationship with fiancee Jessica Preston is currently on the rocks.  Dr. Claire Browne was put in a very difficult place when a new doctor made inappropriate advances towards her.  Dr. Jared Kalu’s job is in serious jeopardy after he confronted the doctor who was harassing Claire and Dr. Shaun Murphy becomes completely unhinged after experiencing a violent meltdown.  Like I said before, this episode was heavy!

It all starts with the team splitting up to cover two cases in the hospital.  Dr. Murphy and Dr. Kalu will be working with Dr. Melendez and Dr. Andrews on a VIP patient named Bobby, a professional gamer who has lost strength in his hands.  Dr. Brown draws the short straw and is sent to work with a new doctor in the hospital, Dr. Coyle. 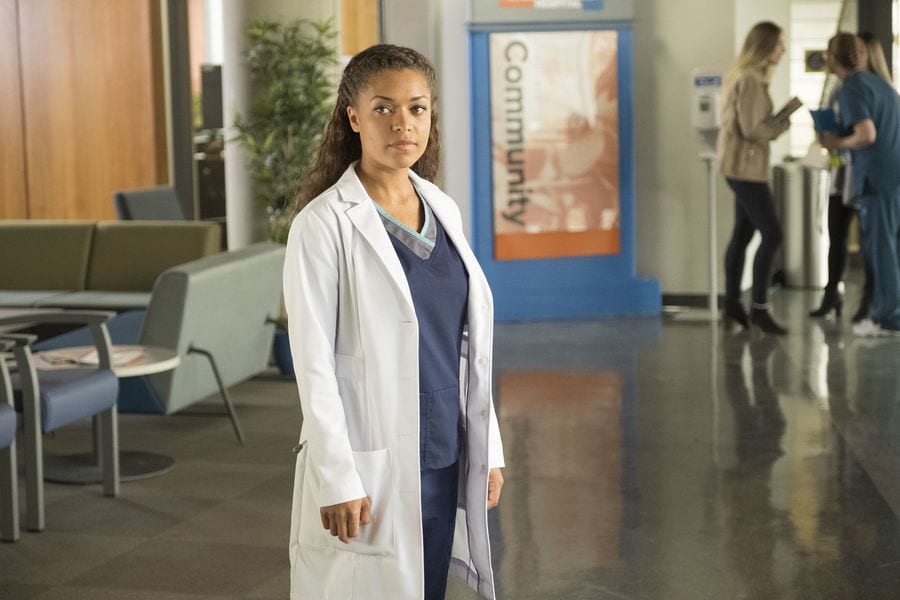 Claire is on her own in this episode working with a new doctor at St. Bonaventure.  Dr. Coyle is handsome, suave and quite charming.  He allows Claire to take the lead on the case but, she becomes extremely uncomfortable when Coyle touches her on her lower back.  Claire confides in Jared and Shaun asking one of them to switch cases with her but they both decline.

Things escalate when Dr. Coyle insists on Claire joining him for drinks.  When Claire politely declines, Dr. Coyle steps over the line by telling her she would have fun, he gives great massages and he’d make her a hell of an omelet in the morning.  She stands her ground but Dr. Coyle threatens to report her for insubordination.

At this point, she goes to Jared with the issue again.  Jared tells her to report Dr. Coyle’s actions to HR but she fears retaliation and, not to mention, she totally calls Jared out for not supporting her!  When she first told him about Dr. Coyle’s actions, Jared assumed she was overreacting which just adds to Claire’s frustrations.  He sees how upset she is and decides to take matters into his own hands.  Jared confronts Dr. Coyle in the locker room by grabbing him and throwing him up against the lockers and threatening him.  Applause for Jared for standing up to this low-life but, if anyone finds out, his job will be at risk!

Love on the Rocks

Things have gotten a little rocky between Dr. Melendez and Jessica Preston.  The couple goes out to dinner with Jessica’s father after putting it off for quite some time.  While out at dinner, her father offers to pay for the wedding (which the couple hasn’t even started to plan).  When Jessica tells her father that they can handle their own finances because they are both adults who make good money, her father responds by saying that won’t be the case once she has children – a topic which it appears Dr. Melendez and Jessica may not have discussed just yet.

Dr. Melendez is displeased (to say the least) with Jessica’s father’s attitude regarding their financial situation and the planning of their family.  Melendez gets a little snippy with Jessica’s father which brings their dinner to a screeching end as her father storms off and Jessica follows. 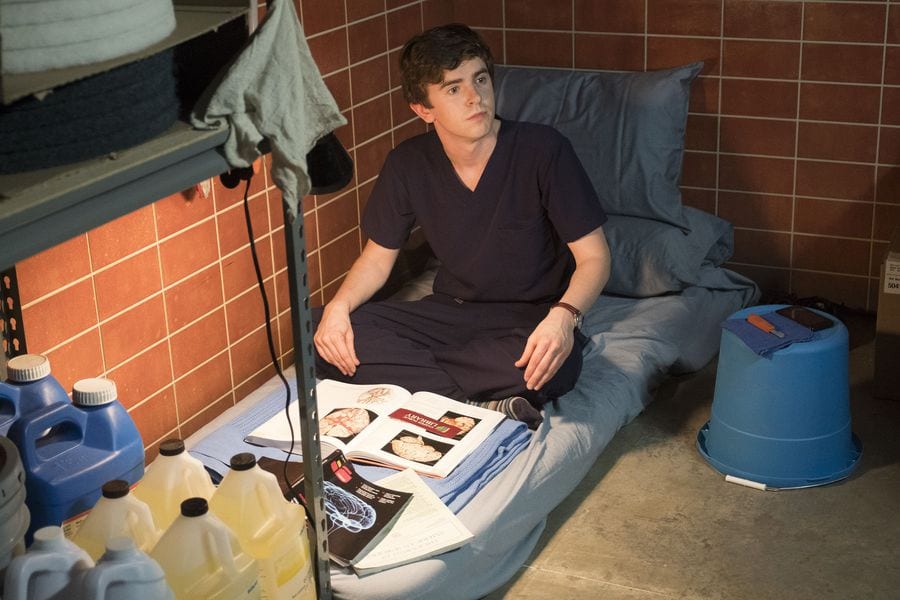 Dr. Aaron Glassman has been growing increasingly concerned over Dr. Shaun Murphy’s wellbeing.  He insists that Shaun could benefit greatly from hiring a life skills coach/aide to help him with some day-to-day struggles.  Shaun is insistent that he doesn’t need an aide and that he can make his own decisions, however, throughout the series, he has been becoming visibly more upset and stressed.  Shaun eventually agrees to meet with the aide Dr. Glassman has picked out but, he completely blows off the meeting by spending the night sleeping in the hospital maintenance room.

Dr. Glassman confronts Shaun about his missed appointment and makes a deal with him.  If he meets with this aide 3 times, he will buy Shaun the surround sound system he’s been wanting.  Shaun agrees at first but then continues to live in the maintenance room in order to avoid the meeting.

Shaun is also struggling during work.  He has been speaking with his patient Bobby, his patient, who begins giving him advice on how to demand respect from Dr. Melendez and the other surgeons.  Shaun’s stress level continues to rise and he begins to break down.  So much so that Dr. Melendez actually shows concern for his wellbeing and asks Dr. Glassman if Shaun is doing ok.  Clearly, he’s not and we’re about to find out just now “not ok” Shaun is.

…And Then Everything Falls Apart

When we next see Claire, she is running into the locker room to confront Jared.  She now knows what Jared did to Dr. Coyle and she wants to make it clear that she can take care of herself.  Jared tells her that he’s been fired for physically assaulting an employee.  OH NO!

Dr. Melendez catches up with Jessica the next evening at work and apologizes for what he said.  Jessica drops a bomb on Dr. Melendez when she tells him that she doesn’t want any children.  Based on Dr. Melendez’s response, this was clearly something that he wanted and now, their relationship is in jeopardy.

Bobby continues to influence Shaun by encouraging him to stand up for himself.  In a wonderful little LOST throwback, Bobby tells Shaun never to let anyone else tell him what he can and can’t do!  Shaun is more convinced than ever now that he can get by on his own, without anyone’s help.  Shaun’s constant declination to meet with the aide eventually frustrates Dr. Glassman.  The two end up yelling at each other before Shaun has a complete meltdown.  He begins screaming at the top of his lungs and hitting himself in the head.  Dr. Glassman approaches him to try to comfort and calm him but Shaun ends up striking Dr. Glassman across the face.  Clearly upset by what has just happened, Shaun runs away in a panic and Dr. Glassman is left stunned and confused by what just happened.

Eventually, Dr. Glassman goes to Shaun’s apartment to look for him.  When he gets there, he finds that Shaun is gone.  He packed up some belongings and his picture of himself and his brother and has run away.

This was honestly one of the most stressful episodes to watch in television history!  What’s to become of the surgical team at St. Bonaventure Hospital?  Is Jared really fired after he stood up for Claire?  Could their disagreement on having children be the end of Dr. Melendez and Jessica’s relationship?  Where is Shaun?

The Good Doctor will be taking a brief winter break and will return with new episodes on January 8th at 10 PM EST on ABC.  See you in the New Year!