Spoiler alert!  The following article may contain some mild spoilers from the latest episode of The Good Doctor.  If you haven’t watched the episode Intangibles yet, read on at your own risk!

This past Monday’s episode, we learn that Dr. Neil Melendez really is human as he doubts his ability to save a sick child.  Dr. Claire Browne is sent on a wild goose chase around the hospital searching for a missing specimen which may or may not hold a cancer diagnosis for a patient and Dr. Shaun Murphy begins to learn the ins and outs of flirting and also begins searching for a life skills coach at the suggestion of Dr. Aaron Glassman.

“One of those Intangibles, I’m guessing is cuteness” – Dr. Neil Melendez

The “cuteness” Dr. Melendez is referring to is his new patient – a boy named Gabriel. Man, is he adorable!  Gabriel is a case which was brought to St. Bonaventure through the international humanitarian program, however, it’s a case that Dr. Melendez doesn’t think he can fix.  Gabriel has severe congenital heart anomalies which require an extremely complicated and dangerous operation in order to be regulated – a procedure that, unfortunately, the team isn’t prepared to handle.  Then, Dr. Murphy asks quite possibly the most important question he’s ever asked.  He says to Dr. Melendez, “is fear of failure a good reason not to do this?”  This seems to have an impact on Dr. Melendez who then begins to work towards a solution to Gabriel’s health problems.

Thankfully, Dr. Murphy comes up with a “terrible idea” which turns out to be brilliant!  He and Dr. Melendez practice the complicated procedure by using some pretty awesome and impressive virtual reality software.  Thanks to a little practice and a lot of hope, Dr. Murphy, Dr. Melendez and Dr. Kalu were able to save little Gabriel. 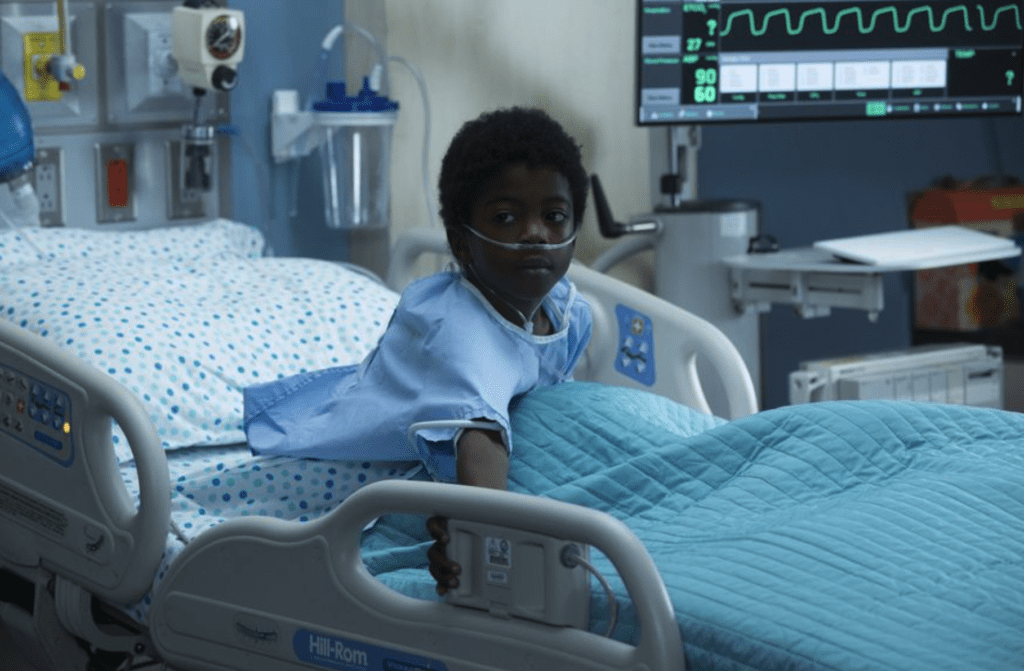 The Case of the Lost Specimen

While Murphy, Melendez and Kalu work to save Gabriel, Dr. Browne, and Dr. Andrews have a tough predicament on their hands.  They are working with a patient who was told she has cancer.  That diagnosis means she’ll have to have an operation to remove part of her throat causing her to lose her voice completely.  Not only is this a problem because she is a podcaster but, she also has a young family to care for.

Before the team can say yes or no to the surgery and to her cancer diagnosis, they need to get her test results back.  That proves to be impossible though since the specimen they took from the patient is now missing!  Dr. Browne searches high and low and even enlists the help of Carly and Dr. Andrews in order to do so.

While searching, Dr. Browne admits to her patient that the hospital is responsible for the loss of the sample, the pain and suffering the patient is experiencing and, well, basically the whole thing.  She did this despite being coached by St. Bonaventure Hospital’s in-house attorney and Vice President of Risk Management Jessica Preston NOT to do that.

Just before the patient is about to go under the knife, Dr. Browne finds the specimen and is able to complete the test.  The results showed that the patient is cancer free and doesn’t need the operation after all which should be good news, right?  WRONG!  While the patient does not have cancer (and that is wonderful), she still chooses to sue the hospital for malpractice.  This is the second big mistake that we’ve seen Dr. Browne make in the recent episodes.  I hope she can hold it together because this lawsuit on top of her mistake killing that patient a few episodes ago could really rattle her. 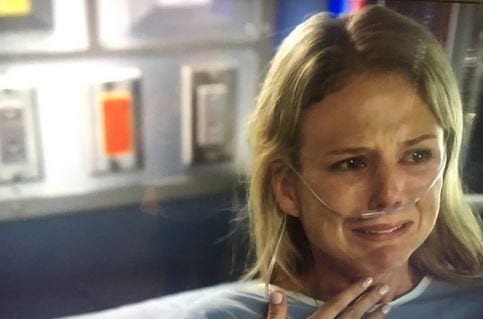 The Flirting Trifecta or, You Know, Ringworm

Dr. Shaun Murphy is beginning to open up to a select group of people.  He has found friends at St. Bonaventure, particularly in Dr. Browne.  The two begin talking and Dr. Murphy tells Dr. Browne the story of how his neighbor Lea called him an “asshat” the other night.  Dr. Browne immediately picks up on the fact that Lea may have been flirting but, since Dr. Murphy’s inability to read social cues is flawed, he may have totally missed that sign.  She introduces him to what she calls The Flirting Trifecta – there’s the playful giggle, the awkward little squirm and then finally, the hair sweep.  According to Dr. Browne, these three signs mean someone is flirting but Dr. Murphy is quick to point out, they could also be signs of ringworm.

Dr. Murphy takes careful note of Dr. Browne’s teachings and puts her knowledge to work.  He creates a chart of every time any person in the hospital has flirted with someone which leads to the discovery that Dr. Browne has been unknowingly flirting with Dr. Melendez!  Uh oh!  Dr. Browne better reel it in!  Especially since Dr. Melendez is engaged to Jessica Preston.

Over the past several episodes, Dr. Aaron Glassman’s concern for Dr. Murphy has grown by leaps and bounds.  Each time Dr. Murphy makes progress forward, something happens which causes a setback.  Dr. Glassman believes that Dr. Murphy would benefit greatly from having a life skills coach.  Not necessarily a personal aide but someone who can just help guide Dr. Murphy throughout the day to day stuff which may be a little challenge for someone on the autism spectrum.

Dr. Murphy meets with the first candidate but he dismisses her for wearing mismatched clothing.  How can someone help him with his basic life skills if she can’t coordinate her own outfit?  Murphy’s got a point there!  The search and the struggle to find Dr. Murphy a coach continues though, he doesn’t think he needs one.  Dr. Murphy has pushed back on Dr. Glassman’s suggestions in the past episodes and, this all seems to be leading up to what’s sure to be an explosive mid-season finale next week. 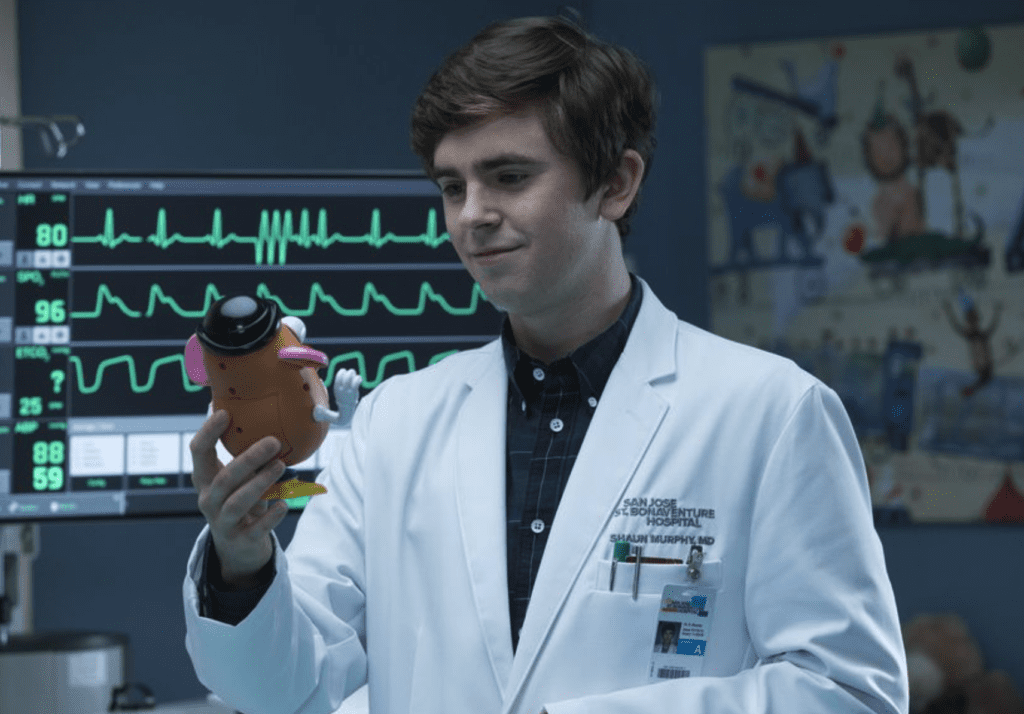 While this week’s episode ended on a high note with Shaun adorably following Lea into her apartment for an apple, next week’s episode honestly scares me.  Over the past several weeks, there have been murmurings on the interwebs that one of the main cast members may be leaving the series (hopefully only temporarily) as a result of the mid-season finale.  The preview shown at the end of the Intangibles episode was intense with Dr. Murphy having a complete meltdown and hitting Dr. Glassman.  I’m scared but, we’ll get through next week together!  Stay tuned for our official preview of next week’s mid-season finale.

What did you think of this week’s episode of The Good Doctor?  What were some of your favorite moments from Intangibles?  Let us know your thoughts in the comment section below!