Earlier this season we had the episode “Abra-Kadabra”. Not only did it harpoon my previous Abra Kadabra Theory – which in retrospect I am VERY happy about – but it also gave us an interesting name drop: “DeVoe”. The name drop came when Abra Kadabra was listing off Barry’s greatest enemies and on the Season 3 Finale we got that name drop again from Savitar himself. With two name drops the same season, it looks almost certain that we have a new name to add to the list of Seasonal Big Bads.

But just who is DeVoe? Well there’s still two possibilities:

That’s right, you heard me! In Season 4, the Flash could take on the 90s R&B/ Hip-Hop group Bell Biv Devoe. Perhaps they were trapped in the remaining Alchemy husks and now their “Poison” song is even catchier! Could this happen? Maybe! Will it happen? No even slightly, but this idea was too hilariously entertaining to pass up.

If we are looking to the comics, DeVoe most certainly points to Clifford DeVoe who was a brilliant former DA who turned to a life of crime. Though he wasn’t just your average genius as Thinker actually had a hat, which could grant him mind control as well as turn his thoughts into actual force – or in other words, it gave him telekinesis. Okay, a smart guy in a hat…. Is this really a Season-long level villain? Surprisingly, yes! 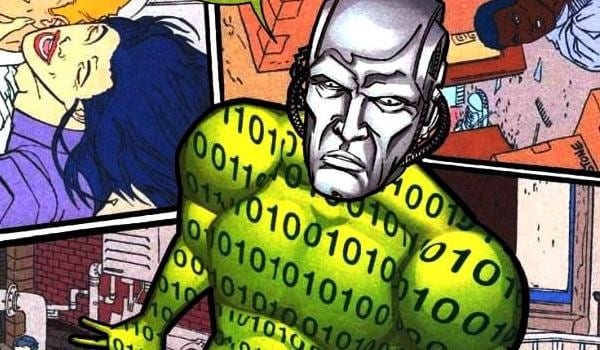 Whereas the first part of Thinker’s story seems more like a villain-of–the-week level, he actually becomes more formidable after his death. In the comics, Mr Terrific (who already exists in the Arrowverse) tried to design a computer system using the technology found in the Thinker’s ‘Thinking Cap’, but the new AI gained consciousness and became a much more formidable villain who could infiltrate and control cyberspace. Now that is certainly something Barry and the gang have never fought before – but they absolutely will!

In the Season Finale, Savitar/ Future Flash recalls different memories and one is about a “cerebral inhibitor to use against DeVoe”, which of course present Barry and the gang “haven’t gotten to yet”. Now even without this second name drop and info, we originally had additional support for this theory from a recent PaleyFest interview with Executive Producer Andrew Kreisberg who said next season will not feature a Speedster as the main villain.

Looks like Season 4 will have Team Flash take on Artificial Intelligence, or again this all just name dropping Bel Biv Devoe. The real question on all our minds though is how Barry will return from the Speedforce? Was it truly his “end of the line” or just a “rest stop”? That’s an article for another day!