Black Panther filmmaker Ryan Coogler is the name to be heard this week, and rightfully so. Black Panther has been absolutely dominating the box office this week, making its climb up that ladder to be one of the best Marvel movies yet.

Today, Sylvester Stallone took to Instagram and posted a Fan Made poster for Creed II, which would serve as a sequel to Coogler’s film, Creed. 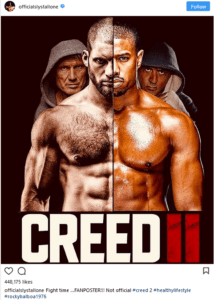 From the looks of it, it would appear that the plot for Creed II would be about Adonis ‘Donnie Johnson’ Creed (Michael B. Jordan), Apollo Creed’s son, getting ready to face off against son of Ivan Drago (Dolph Lundgren).

In 2015’s Creed Sylvester Stallone served as the coach tp Adonis, the son of Rocky’s former opponent and dear friend.

Michael B. Jordan is Directing a New Movie, So Buy Us a Ticket Right Now