There is a music video from Twenty One Pilots that has been released for Suicide Squad: The Album that has become available just this Tuesday. Take a look!

The video has so many awesome features to it if you ask me. It has the band in the video (of course, this is the most logical) but not only them. There are also scenes from characters like Harley Quinn, Boomerang and Diablo.

Not only do they just show us things we already have seen, also new footage has found its way into the music video!

And there is another awesome feature. The band even got their own poster! 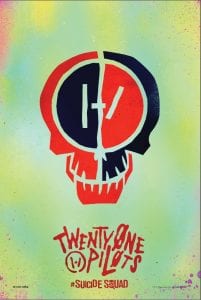 As much as I like this song and this band, I am scared though, that yet another song will become overused of them.

Suicide Squad will hit the theatres on August 5!