While it may not be a top priority these days, fans of The Walking Dead have had a pretty reasonable question on their minds since around the show’s third season: 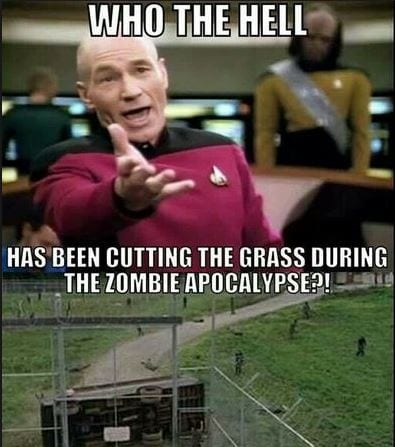 For years, we’ve all wondered who exactly is keeping the grass so well manicured during the trying times of the apocalypse? Well, in an exclusive bonus scene from this past Sunday’s Talking Dead, Walking Dead showrunner Scott M. Gimple gave fans a very exciting yet mysterious answer!

So, what did Gimple have to say?

Listen, this is something that we deal with and because of that, I am working on a story. All of these years, why the grass is cut will be answered. I don’t know what medium, might be fan fiction, but it will be told.

It may not be the exact storyline that you want The Walking Dead showrunner to be focusing on, but hey, it would be nice to know who has managed to keep that grass mowed without luring walkers over.

What theories do you have about who is cutting the grass? You can watch the whole bonus scene with Gimple and This Is Us’ Chris Sullivan below!

Fan Fest Community: Our Favorite Seasons of ‘The Walking Dead’

Home » Featured » Scott M. Gimple is Ready to Tell You Who’s Been Cutting the Grass on ‘The Walking Dead’