Here’s what we learned.

Wonder Woman was created by William Moulton Marston with the help of his wife, Elizabeth Holloway. They both believed in gender equality and progressive forward thinking.

Holloway along with Olive Byrne gave Marston material to use toward the iconic character. Holloway brought up the idea of women being emotionally driven and Byrne brought in the psychology and characteristics of young women. These two women became Marston’s muses.

Byrne eventually became Marston’s assistant/mistress and moved in with Marston and his wife.

By that time, World War 2 was brewing and the Superman comics were first published. Marston and Byrne created the idea of Wonder Woman after seeing their children read Superman. If a guy can be super, why can’t a woman? Unfortunately it took a while for this idea to take off.

In 1941, she finally did. A strong female character who was as powerful as Superman was a hit. She brought a deeper level to comic books: mythology, feminism and intelligence. Marston poured his personal life into his character. 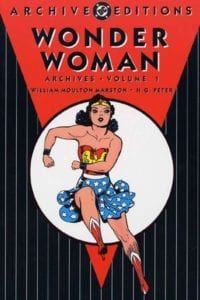 When Wonder Woman was added to the Justice Society of America, she was demoted to secretary. Because of his inappropriate content, Marston didn’t get to write these segments so he created Wonder Women of History. These segments featured real life women who made a mark on history. Even after the war, Marston kept his feminist attitude toward his heroine.

In 1947, Marston died of cancer. Without him, Wonder Woman began to conform to society. A once strong independent woman, became a sappy romantic. She traded in her powers for a boyfriend…

In the ’70s, women began to fight back and felt they needed to “rescue” Wonder Woman. They succeeded and Diana Prince got her powers back.

The 1975 a TV series officially turned Wonder Woman into an icon with Linda Carter bringing her to life. 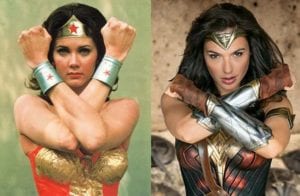 It wasn’t until 2016, when Gal Gadot was able to bring the character to the big screen, and she’s here to stay.