With the film industry continuing to rise, it’s no surprise that Marvel is at the forefront. Because of the film success, it’s easy to forget where these great superheroes came from.  Iron Man and Captain America came from a lesser mainstream medium: comic books!

The Walking Dead’s creator, Robert Kirkman is hoping to change that. Robert Kirkman’s Secret History of Comics is a six-part AMC docuseries which covers aspects of comic book history.

“It actually originated with them [AMC]. They saw the success of Walking Dead and Preacher, and comic book shows outside of their network, and they were like, someone should really do something with comic books. They came to us with a vague notion of, ‘Do you have any ideas for doing a docuseries that in any way explores comic books as a medium?'” 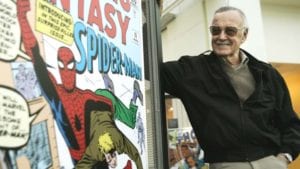 “I was like, ‘That would be a real cool basis for a show’ — to actually tell some of the stories that most people aren’t really familiar with, about the people that were behind the comics, or a lot of the things that went into making them. It ended up turning into a pretty cool series,” Kirman told CBR. “It’s really just a matter of keeping things interesting. I think once you see these episodes, every one of these stories has fascinating twists and turns, and things you wouldn’t expect. It’s great because it’s all true. There’s definitely a dramatic narrative to the lives of these people. In some cases, it’s a lot of tragedy. But that does make for a very compelling story.”

With over 80 years worth of history, let’s hope that these six episodes turn into season 1. After all, Kirkman and his docuseries are just scratching the surface.

Did Stan Lee Just Confirm That A ‘Black Widow’ Movie Is In The Works?