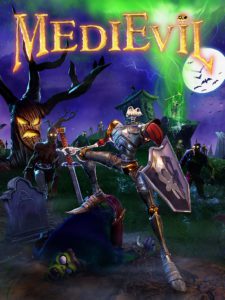 The perfect Halloween game is here! Well that and Luigi’s Mansion 3 of course. The difference here is one is a remake. Following in the steps of Crash Bandicoot before it, MediEvil is one of the original PlayStation properties Sony still owns. When Shawn Layden announced the game at PSX in 2017, the world could not wait for the return of our favorite skeleton soldier. After playing the game I definitely see why. Let’s get into this review.

So I must admit, I have never played but bits and pieces of the original game. I remember enjoying it, but never being able to play much. This game is a new experience for me. Right off the bat you can see the old school style as the game opens with a Star Wars-esque scroll. Lani Minella narrates this, a change from the original, but a welcome one.

Once you get into the action you really feel the old design, although with a fantastic tune up. A good comparison might be that old ‘69 Camaro your dad may have in the garage. Yeah, it may not be the newest car out, but it certainly looks and runs well with the care he put into it. This is MediEvil to its core. The game may be dated in terms of design, but at its center is a really fun action game.

Your mission is with Sir Daniel Fortesque, our protagonist. He has awakened because the evil sorcerer Zarok (who you were thought to have killed) is alive and kicking. He’s raising the dead in order to take over your former home of Gallowmere, but he didn’t count on you. Picking up a weapon or two, it’s time to leave the crypt and fight back against evil.

This tends to be pretty simple in MediEvil levels. Most of them are decently small, but extremely well polished. I on the regular spent about 20 minutes in each level. One thing with the game, you don’t have a compass or anything to track where you are going. Gven the size it doesn’t matter much, although sometimes it’s irritating. You may find yourself running in a few circles looking for a rune, but generally it won’t be for long.

One thing you will find plenty of, puzzles and zombies. Well, mainly zombies. But the puzzles are fun. There is one in particular that reminds me of something you will only find in a retro game. You walk into a mill, and it’s just a circular pit in the middle of the room. There is no way to jump to the other side and get the rune to progress. The solution? Running in a circle. No really. You must run in order to raise the platform to reach the other side. Is this something you’ll see in any of our huge RPGs today? Probably not.  But it reminds me of the ingenuity of developers from another time.

Something you may not expect is the difficulty of the game. It isn’t super hard to play, but I don’t know that I’d suggest it for your five year old. I think of it in the same way I think of Crash Bandicoot, in my head it wasn’t that tough. There are certain enemies and levels that will frustrate you. One in particular for me, the Asylum, made me fume. Enemies are just thrown at you in tight arena-like spaces, and with little camera control in them, you might scream too. It’s not a detriment to MediEvil, it’s just how it plays. While not in the original, a difficulty adjustment may have been a nice inclusion for younger gamers.

Speaking of camera control, it is better. Not great in comparison to some games today, but it has improved. There are several moments I have gotten caught looking at a wall or hedge while trying to fight an enemy. I’ve also had spots where you can’t move the camera when it would benefit you more. They aren’t big problems, but it can be annoying in the worst places.

The gameplay feels really tight for its age. I’m sure this was something Other Ocean wanted to do right. For me I don’t always care about 4K or ultra real graphics with a remake (although those are nice). If you make it play well, I’ll most likely stick with it. Fighting with your sword, throwing daggers, using the crossbow, all feel great. It’s a hack and slash formula, and it works.

My favorite weapon may be the hammer. Once I got that thing it helped me to finish the Asylum level I mentioned earlier. That’s the thing with the gameplay. You need to take your time getting chalices (collectibles earned by defeating most of the level’s enemies) to earn better weapons which can assist you in progressing. You will need every upgrade if you want to beat the fiercest of Zarok’s minions.

Even though I said I don’t care about graphics doesn’t mean MediEvil doesn’t have good ones. MediEvil features it all in beautiful 4K (on a Pro of course). I want you to take a quick look at the above video showing the side by side comparison (Credit to Tealgamemaster, give them some love!). Doesn’t that look incredible? This is right in line with how great the Spyro and Crash Bandicoot remakes look. I’m not sure I have a standard for the perfect remake, but these all come close. As for the cutscenes, I’m just blown away. They look incredible. The only issue I had was occasional frame rate problems. I hope to see this improve in future patches.

The music for MediEvil also works beautifully, with the original composers back and killing it. Other Ocean even researched the kind of music the previous developers would have listened to during development. As brought up before, Lani Minella narrates the opening, but also does an amazing job reading the book entries. This wasn’t a part of the original title, and I love this touch. The other voice lines besides Sir Dan were also kept for the title. Amazing to think those previous recordings were that good in 1998!

Besides some frustration with a few things, I have enjoyed playing MediEvil. This is a piece of PlayStation’s past, one of the original mascots, a true classic. This game is one that deserved a chance to be reborn. Does it deserve to live on? Only time will tell. I honestly think it would need to change in order to be viable as a new title. But as a nostalgic relic of times past, MediEvil’s resurrection is one you should definitely attend.

*Review code was provided by our partners at Sony PlayStation. You can pick up MediEvil October 25th, 2019 at participating retailers or click right here to grab it digitally.