Spoilers ahead for Invincible Iron Man #8. 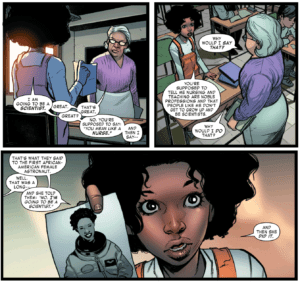 The flashbacks to Riri’s childhood were a little strange to me in this issue, but after thinking about it I kind of understand where she was coming from. As a kid, she needs the motivation to excel. She needs someone to tell her that she can’t, so she can go out and prove them wrong. In a way, she’s always wanted a bad guy to stop—someone external she can fight. She’s always wanted to excel and be a hero, in part to prove that she can. I’ve enjoyed these various glimpses at her childhood, where we see the little moments that helped shape the hero she wants to be. Too often flashbacks can seem too on the nose and too coincidental for the present situation, but that doesn’t feel like the case here.

In the present, Ironheart dashes off to the crime scene from the last issue, where Sharon Carter was involved in an explosion. Carter survives, and it looks like there were no casualties apart from the unwitting bomber. I know that Carter is manipulating Riri, but she seems very straightforward about it. Scenes like this really differentiate her from Maria Hill, who was much more ruthless in her machinations. Sitting in the middle of a charred ballroom, Sharon just chooses to give the budding new superhero some well-needed advice.

Then she tries to enlist Ironheart’s help in taking down the mastermind behind the attack, Lucia von Bardas. It’s a small moment when Riri asks the AI-Tony if there might be a reason she was the one Carter chose to ask for help but coupled with the flashbacks it really speaks volumes. Riri thinks there must be a reason Carter chose her—that she has something that no other superhero has, but Tony (and Sharon) insist it’s just a matter of convenience. Riri was just the first one to show up. She was in the right place at the right time, and now she has to decide if she’s ready to take on an international incident… when in the last few issues she failed against a D-List villain.

Riri is diving head-first into something she isn’t prepared for, and the flashbacks kind of give us an idea why. She’s impatient, optimistic, and anxious to prove that she’s ready for anything. Unfortunately, while she manages to take down Lady Octopus without much of an issue, there’s no way she’s ready for this.

I want to see Riri succeed, but I just know there’s going to be a hard road ahead for her.