Spoilers ahead for Invincible Iron Man #7.

I honestly think that Riri Williams is a perfect jumping on point for new comic readers, but she also has so much to offer those who have been around awhile, too. Like I said about the last issue, Riri is relatable. “Her daily routine is pretty routine,” says a voice later revealed to be a S.H.I.E.D. Agent briefing Sharon Carter on Riri’s situation. He also adds that Riri was excited by the offer to join the Champions, but doesn’t say whether she accepted. 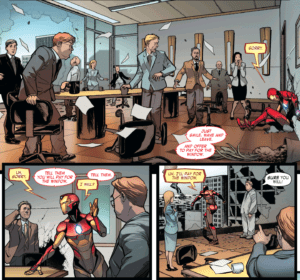 In fact, we aren’t told what Riri’s decided to do. It looks like she’s still thinking over her options. Or trying not to think about them at all. Putting off the inevitable decision while she continues to fight crime on her own. I hesitate to call this a completely “filler” issue, as the start and end do further the main plot a bit, but everything in the middle is there to teach Riri a small lesson.

I love AI Tony coaching Ironheart through the etiquette of fighting in the city. Crash through a window? Don’t forget to say you’ll pay for it! Just make sure you act convincing (she wasn’t convincing). The banter between hero and AI-assistant is kind of the best part—if you’re a fan of Bendis’s writing, of course. The references to Tron and Hugh Grant certainly won’t be for everyone, but they worked well to me.

Some might not like seeing heroes fail, but Riri’s a kid, it makes sense that she’d have a few false starts. She does beat herself up over losing to one opponent, especially after the successes she’s had. But Tony’s mom is right, it’s what Riri does with her loss that will matter most. Up until now she’s been coasting, tinkering with her suit in her garage, but if she’s serious about being Ironheart, it’s time for her to take the next step.

That next step, unfortunately, is a crisis she is not ready for…. I have a feeling she’s going to need some additional help, I just hope the inevitable setbacks don’t dim her outlook too much. Riri is an optimist, and while a few missteps here and there are necessary, I hope she always maintains that.

I need to reiterate another sentiment from last time: this book is gorgeous. The fight between Ironheart and Wil O’ The Wisp, especially when we see Wisp through the slit in her helmet, was my personal favorite. Even if I wasn’t already a fan of Riri and AI Tony working together, I’d be tempted to buy Invincible Iron Man for the art alone.