Spoilers ahead for Deathstroke #19 and “The Lazarus Contract” crossover.

You might have seen the image floating around and wondered what it’s about: Deathstroke with super speed! What? Has Slade Wilson become a speedster now?

Well, not quite. The same week that Slade returns to CW’s Arrow, DC Comics released the third part of its crossover “The Lazarus Contract”. Although this is part of an interconnected story, it still reads like any other issue of Deathstroke, just with a more colorful cast of super suits. If you’re only reading this issue as part of the crossover, I recommend giving the rest of the series a shot for Christopher Priest’s great storytelling structure and his examination of Slade both in and out of the iconic mask. 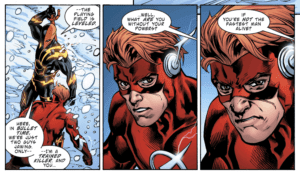 But, back to the question: how did Slade get super speed? The same way Slade get a lot of things… he just took it. There was some weird science involved. In the last issue of Teen Titans, he managed to siphon power away from the Teen Titan’s Wally West and into a special suit. Now the most dangerous killer has super speed. Even though he doesn’t have the same experience as the Titan’s Wally, he has still managed to even the playing field against the Flash. Without Wally’s advantage of being the fastest man alive, he—and likely everyone else on both teams—are no match. 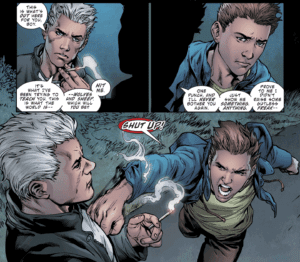 There are several moments between the Titans and their teen counterparts, but they are mostly forgettable. The focus of the issue is on Slade as a father, seen through the eyes of both him and his second son, Joseph/Jericho. No surprise, Slade was a terrible father.

We also learn the story behind the titular contract, and the secret deal between Nightwing and Deathstroke. It is a bit… underwhelming. Slade wanted Dick to keep an eye out for Rose, and in exchange Slade would stop trying to kill the Titans. He wants what’s best for his daughter, or so he says. But I get the sense that Slade only really cares about his children when faced with the prospect of losing them. He wants to save Grant only after Grant is dead; he stays by Rose’s bedside only while she’s in a coma. It’s noticeable that Joseph, who was recently released from rehab and is at least conscious, is the one child he doesn’t make time for.

There is a large art team on this issue, and it unfortunately shows as the style drifts all over the place. None of the sequences are bad, but they simply don’t mesh with one another. Still, this is the best issue of “The Lazarus Contract” so far, in an arc that has been relatively short on character development. With most of the focus being on Slade, I almost wonder if a crossover was really necessary. Perhaps the last issue will shed some light on the rest of the cast–Wally West having a talk with the other Wally West, for starters–but we’ll just have to wait and see.