Spoilers ahead for Batgirl and the Birds of Prey #11

There’s a lot of things I don’t like about this issue. Right off the bat, I didn’t like the cliché of Black Canary and Huntress dangling Gus off the roof. Barbara didn’t tell them why, but they did it anyway? Helena might kill people sometimes, but last I checked Dinah was mostly against it. Based on the team interactions before now, I just don’t buy this opening. It starts everything off on the wrong foot. 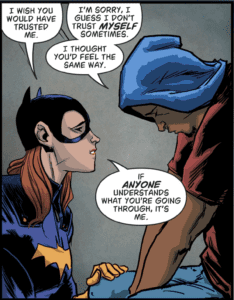 The rest of it boils down to not liking Gus. Now, I do empathize with him, and I deeply respect the decision to have Barbara call his bi-polar disorder what it is—a disability—but after his shady introduction it’s going to take a lot more than the inevitable explanation of his tragic backstory for me to like him. I certainly dislike him less than before, but not by much. And I’m not sure I really want more time devoted to redeeming a character that was introduced in such an insufferable way.

So, it turns out that Gus has been working for one of the Birds of Prey’s old foes, The Calculator. And it just so happens that, right before Gus was supposed to turn the Birds over to Noah Kuttler, the villain’s family was kidnapped. He helped someone steal from the wrong company and now they’re holding his family hostage. The introduction of Kuttler and his family also means the possible introduction of his daughter, Wendy Harris. Wendy has also been known as Proxy, a hero with a similar skillset to Barbara Gordon’s version of Oracle. The idea that we could have Proxy instead of Gus… doesn’t really do the poor guy any favors.

But, I digress. Gus’s story isn’t anything you haven’t read before, and I fully expect that the Calculator will betray the Birds by the end of this new arc. Like I said above, the highlight of the issue is Barbara showing him compassion when she learns about his illness. There is some snarky humor (all from Huntress), but the rest is just kind of frustrating… especially the “twist” at the end. 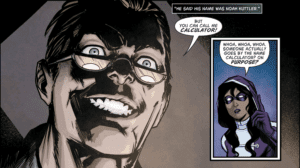 Who is it that stole the gems and put Kuttler in this predicament? None other than Selina Kyle, who apparently answers the door for the pizza delivery guy dressed as Catwoman. Not even trying to consider where this arc takes place on the timeline of the larger DC Universe, it was a silly reveal.