There will be several minor spoilers for the issue in this review! Proceed with caution.

Each issue of Batgirl and the Birds of Prey tends to put most of its focus on one bird. Black Canary’s turn has come back around, and we get a small follow up on the backstory provided for her in an earlier issue when she opens herself up to a young, troubled metahuman. However, most of the plot is spent in the present as she attempts to learn more about Blackbird, a metahuman villain who appears to be training other metas for her own personal army.

Readers who are familiar with Justice League Unlimited will be happy to see Canary fighting in Roulette’s ring at the start of the issue. It is always great to see Dinah Lance in a hand-to-hand fight. While she is a metahuman with a devastating ability, she is primarily a martial artist. Her cry is always at its best, from a story perspective, when used as a last resort. She is forced to use it against a tough opponent named Osmium (who turns out to just be Blackbird in disguise) and that moment has a greater impact because she was backed into a corner. 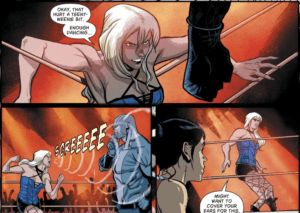 Blackbird clearly cares more about Dinah’s cry than she does about anything else, and trains Black Canary and three other metahumans to improve their skills. This is all a pretense, of course. She continually preaches the superiority of metahumans. Dinah is the perfect character to place in this situation, as a meta who focuses primarily on fighting with human tactics and is surrounded by human friends.

Now, while I do believe this is an interesting story for a character like Black Canary, it is a little odd that no one recognizes her…. She is a famous rock star after all! Rebirth has not washed that away, considering it is referenced heavily in both Birds of Prey and Green Arrow. She does not even change her costume – she could at least consider dropping the fishnets. An alias doesn’t really help if everyone in the crowd might already know your face. Not even Huntress, a former secret agent, thought to give her some kind of identity concealment?

Eventually, Dinah uncovers the truth behind Blackbird’s power-sucking ability. But for a time she was under the impression that the villain was simply telekinetic. It made me wonder why she didn’t question Blackbird’s ability to shape-shift into the muscle-bound Osmium at the start of the story. Much like the “no one recognizes the lead singer of a popular band”, this is also not explained. While Blackbird does make it clear she knew who our hero was from the beginning, I find it hard to believe Dinah did not see that twist coming. For someone with her past – one she reminds us of in this very issue – her survival instincts were severely lacking.

I have two main thoughts about the art for Birds of Prey. The first: I am continually delighted by how fit these ladies are drawn. All three heroines are masters of hand-to-hand combat, so it only makes sense! Roge Antonio consistently gives Barbara, Dinah and Helena the physical presence they deserve.

Unfortunately, my second thought is just how uncomfortable some of the facial expressions make me. It is especially apparent in the eyes. It is not enough to completely turn me off the style of Birds of Prey as a whole, but was just stuck in the back of my mind throughout the issue. I also could not tell if this panel was meant show Dinah being sarcastic, or if these three characters were supposed to look a bit more enthused: 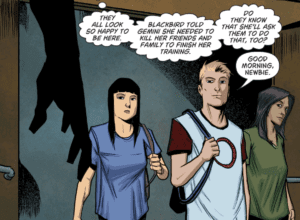 Batgirl and Huntress do not appear until the end of this issue, so we miss out on the usual banter between the girls. However, the rest of the issue makes up for it with a focus on Blackbird and the mounting threat she poses for the team. The Bensons are clearly building up to a small-scale showdown between humans and metahumans. As the only meta on the team, Dinah is at the center of that fight. The end of the issue introduces two additional (human) players as we head towards the end of the arc. While the conflict at its core is interesting, I just hope the next issue makes our heroes a bit more observant.

Home » Featured » Review – Batgirl and the Birds of Prey #9