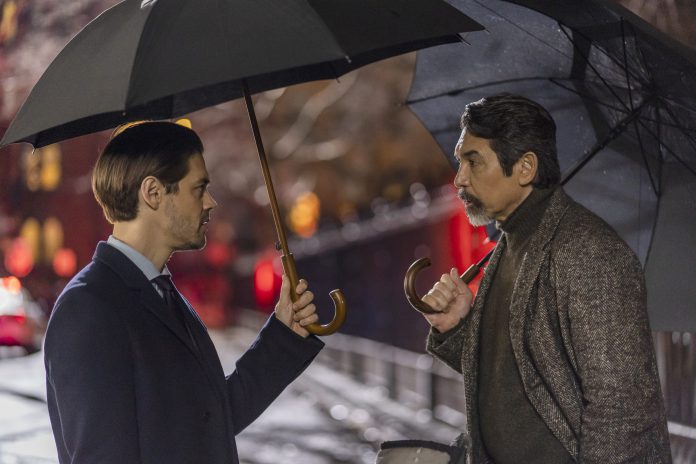 Malcolm is visiting Martin in prison and they are getting along. Malcolm asks how’d he’d kill him if he wasn’t cuffed. Martin, in turn, asks how Malcolm could kill him. He doesn’t answer even though he has a few ideas.

Malcolm is back from his vacation and wants to visit Martin for closure. Jessica tells him she’s meeting a stranger about the girl in the box and Malcolm invites himself. At the meeting spot, they find a body. Why’d Jessica drop her purse?

The guy died last night and was moved to the carousel, wanting Jessica to find the body. Someone claiming to be the killer wants to talk to Ainsley who had just been promoted to anchor. The guy chose the man at random and tells Ainsley that her mother is a fraud and that more people will die if she doesn’t give him money. The Carousel Killer has been wronged by the Whitleys.

Martin learns of the Carousel Killer by watching Ainsley’s broadcast and calls her live on the air. He wants to help. This killer is motivated by Dr. Whitley… The killer is connected to one of Martin’s victims.

Jessica goes to pay the ransom at the place she met Martin. She finds a phone that sends her on a quest. Gil starts investigating people who have been wronged by Jessica and Martin and end up in the park. The killer has a new victim and wants Jessica to dump the money out. The killer killed the man anyway. In the car, Jessica finds her purse. The killer returned it along with a clue to the next victim. The killer wants her to kill Martin.

This killer is taunting the Whitleys. Malcolm pays Martin a visit, so does Jessica. Malcolm senses something is wrong and talks her out of killing Martin. Martin recognizes the woman in the photo and Malcolm puts two and two together and concludes that the killer is connected to the one patient that died on Martin’s table. Martin also admits to trying to kill Malcolm.

Martin wants them to kill him to stop the killings and triggers Malcolm to do it knowing that he has it in him. Luckily, Malcolm knew just where to stab him to make sure he’d live. With Martin in surgery, Malcolm finds Corey Wheaton who wanted revenge on Martin for his wife’s death. She was the only patient Martin lost.

What?! This story continues next week and I don’t think I can wait!