What is it with villains and their inability to keep there mouths shut? Is there some kind of unspoken rule that once you become the chief villain of any story that you have to just open your mouth and shoot yourself in the foot? The world needs a better class of villain, and Evie Cho you are not it. Which is a shame because she seemed so promising. Seriously though, how could someone that smart be that dumb?! We’ll get back to this though as the episode before the season finale gave us a lot to chew on. 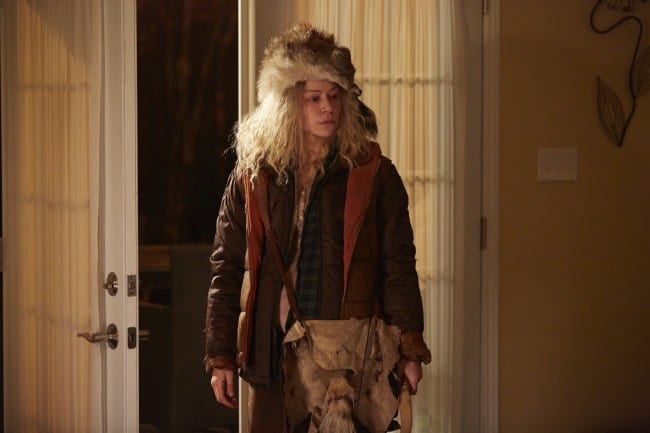 Let’s start with the return of Helena, who was instantly welcomed back with open arms by this reviewer. I’ve missed her. Helena has been living out in the woods, killing anything with fur it seems, and enjoying the kickings of her babies. After a successful deer hunt she uses her Clone Club phone to call Sarah and check in. Why now? Unclear, but who cares as it opened the door to her return as well as the writing off of the seasons weakest story, Adele, who will have to be saying hello from the other side as she has left our narrative for the foreseeable future (I’ll miss these jokes though). Thank you Helena. I’m not really sure what the whole point with Adele was, it made sense when she was going to represent Donnie, but how could Felix have not assumed that the Clone Club drama would somehow enter her life as well? Plus the last couple of weeks Felix has been functioning as normal while Adele  just seemed like dead weight. Let’s move on with our lives, shall we?

Elsewhere Sarah and Rachel learn that there are two Bright Born mothers on the run who have a video of what happens to genetically defective babies. Not going to lie this got pretty grim but it helped further establish Bright Born as a big bad. Sarah instantly doesn’t trust Rachel, because seasons 1-3, and it backfires on her as Rachel is this weeks hero. Say what you will about Rachel but she has an ability
to read Sarah and to recognize when she’s unable to pull something off. Going behind her back with an alternative plan with Ira lead to the saving of the surviving Bright Born mother as well as the impending downfall of Evie Cho. Rachel blackmailed a confession out of Evie and like all power hunger jerkfaces posted that confession to the internet along with the video of what happens to infants with genetic problems in Bright Born. What should have been a proud moment for Evie Cho quickly turned into a disaster, and one has to think that Bright  Born is going to be in some serious trouble.

Where does that leave Rachel? Well in a great position to seize power of course. While most villains have a tough time keeping their mouths shut they also don’t do anything that won’t benefit them. One has to think that with Evie on the ropes with the Neos, now would be a great opportunity for Rachel to seize power within this weird cult. Like I said, Rachel doesn’t do anything for free.

But before that can happen one has to believe that she needs to get these swan images under control. Our cyber eye continued to be on the 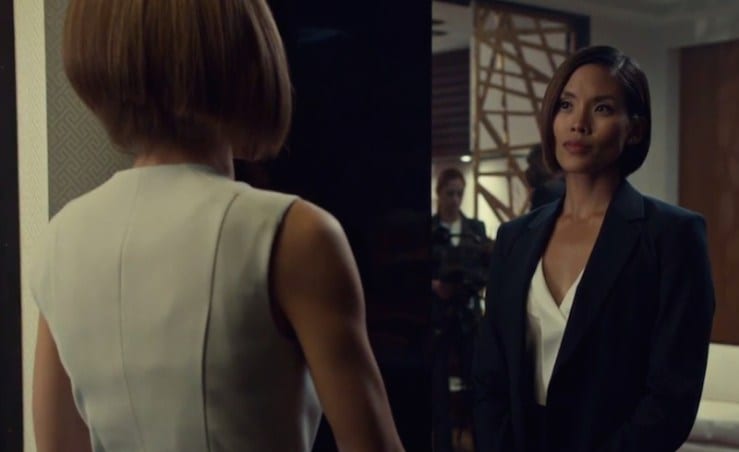 fritz again this week not only showing off the swan (again) but a camp full of militia, seemingly on the island Susan Duncan and Cos are on trying to find a cure. It almost seems like some sort of secret Neo strong hold, but it appears that maybe these “glitches” aren’t visions but someone trying to send a message. Who could that be you ask? Well how about lead candidate, Delphine, who was revealed to be very much alive at the end of this episode (wooohoooo). Although she is not alone as some dude put his hand on her shoulder (Cos better not find out about that!).

Here’s my theory. Delphine is not the one sending the images to Rachel, because seasons 1-3. I think the person who put his hand on Delphine’s shoulder also has a cyber eye and is transmitting images to Rachel. Whether on purpose or not is yet to be seen but who could this person be? That’s where it gets weird. I want to say Paul because he was all blown up and it would make sense for the Neos to reconstruct him, but I also don’t want to say Paul and hope it’s just some mystery person. Whoever it is seems to have some sort of bond with Delphine and is probably directly responsible for her survival.

Elsewhere Donnie is out on bail with all types of prison confidence and Allison is having doubts in her faith. She is able to convince Donnie to make a run with her but that gets cut short by the arrival of creep ambulance Neo #1. After Donnie gets tied up, Ambulance Neo, threatens to put a maggot bot in Alison’s mouth as she prays for saving. Luckily Helena used to be of the church and shows up and puts an arrow in his neck. Man, I’ve missed her!

Where does this leave us going into the finale? Well Evie Cho, at least for now, is still in charge of the Neos and needs to be taken down. Delphine needs to get rescued and returned to Cos because who doesn’t heart a good love story. A possible cure? A possible death? A war? I don’t know. The finale is pretty wide open at this point and should prove to be pretty tense.

There you have it Geeklings! Be sure to sound off with any theories you may have in the comments below. Let me know what you expect to happen in the finale. Whose going to make it or whose going to die? Or maybe just explain why villains can’t keep their mouths shut.