Orphan Black season four will hit the half way mark with this weeks episode, and the evil master plan of the Neos is starting to take shape. We learned last week that the maggot bots are trying to change the DNA structure of their host and if that process was moving a little too slow for the Neos don’t worry as they’re implanting enhanced babies in women trying to get pregnant. I wonder how one sells would be parents on that. “Listen, I know you want to have a child and are struggling.

Not only can we give you a baby but it might have a tail. You in?” How do you say no at that point? When you reach the point of secret underground IVF treatments, you’ve pretty much passed the point of saying no to a baby with a tail. Which I’m sure all factors into the Neos “breed” out the regular human plan This knowledge does very little for Sarah who still has a maggot bot calling her cheek home. As I’ve noted here before, Sarah seems to have a short fuse this season and isn’t thinking the most rationally. I for one think she’s become far too trusting, a trait that has already found her compromised once, and is almost recklessly looking for answers. MK, after almost blowing up Ferdinand and stealing his cash flow, is in the wind now and probably won’t turn up again until she sees fit which means Sarah is on her own right now.

Clearly the answers lie with whatever Beth was doing before she bought a one way train ticket (for some reason these train jokes crack me up) but Sarah is doing her best to not see that (she could probably use Rachel’s eye). She’s constantly in Beth’s apartment or watching her surveillance tapes, but for some reason Sarah has yet to really put that puzzle together. Just goes to further my “Sarah isn’t thinking rationally” theory. Speaking of Beth her two different eyes, pregnant Neo informant turned up recently sans baby, but still rocking that creepy eye, to yell at Alison. In her defense she thought Alison was Beth, but still yelling at Alison in public is quite the gamble. Looks like we’ll now see Alison put on her Beth costume as she’s sure to track down the old informant for some answers. It seems like Beth was super busy before she killed herself which is puzzling because it looks like the time frame between her encounter with the Neos/shooting and jumping in front of the train was pretty small. I guess if you’re suspended and a junkie you find that you have a lot of time on your hands. Why not stir the pot or maybe put on a blonde wig, grab a gun, and come home covered in blood. Am I the only one who wants to know what the hell that’s about?!

Elsewhere Felix has got his hands full with Donnie as they’re trying to get themselves a genetically enhanced baby,
but the trailer seems to indicate that his blood sister is going to be showing up again. Ugh. Can we just put this thing to bed yet? Naturally Sarah believes Adele (not that Adele) is a Neo plant and chances are she’s probably sort of right (military involvement perhaps? Speaking of which, where’s Shay?). The sooner that goes away the better. I know Felix wants to seem like he belongs to a family but I think he’s being a little childish here. The story with Donnie is way more interesting and helps bring some humor plus actually furthers the plot. 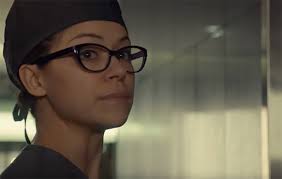 Rounding out the trailer it looks like Professor Duncan and the Castor clone have left their underground Rachel storage center and are making contact with actual people. They want to find Kendall and seem to be striking out maybe this week they’ll make some progress in that adventure? Duncan knows that Rachel has been passing notes in school to Ferdinand so one has to wonder what will happen if they cross paths. Man, that dude is having a tough season.

With Helena leaving the Hendrix household the door is open to introduce a new clone or possibly a returning clone?
Is it me or does that tae bo/self defense teaching clone seem a lot like Krystal? You know the clone that worked in the nail saloon and had her eye stolen. It was her eye right? I know there was some sort of secret surgery going on. Wonder what purpose it serves introducing her back into the fold at this stage of the season. As I recall shehad a healthy dose of paranoia and I’m sure previous events haven’t helped that at all.

As for the rest of the gang, Cos is rocking some scrubs and is able to tuck those dreads ever so neatly into her little cap and one has to think that maybe she has some sort of maggot bot type surgery in her future? I only saw Kira in the background so there is the chance of more fire clone predictions. Oh joy! And Kendall has been missing for awhile now. I wonder
how much of that is due to her illness or more like the writers don’t have anything interesting for her right yet.

What do you guysexpect from Orphan Black this week? Where do you think Helena is going? What kind of answers does Beth’s informant have? How do we get a genetically modified baby? Let your theories fly in the comments below. See you Saturday for the episode review.