We have officially reached the half way mark of season four of Orphan Black and it seems like we have our set up for the last half of the season. “Human Raw Material” was an episode that started off alright but had a very strong ending filled with brilliant performances by Tatiana Maslany. Saying things like that should be old hat at this point but she keeps coming up with ways to make it a relevant statement. Also I’m not entirely sure if old hat is an actual saying. I feel like I’ve heard it somewhere before…

I was especially happy with this week’s episode as I find Cos to be one of the more fascinating characters on the show (she might be my favorite Clone Club member), and as of late she’s taken a bit of a back seat being restricted to the underground comic book lair (and if any of you read my Pull List column then you know that that is something I need in my life).  This episode was primarily split into two major focuses with Cos and Donnie’s infiltration of Bright Born and Sarah and Kira (who seemed less Omenish this week but still creeps me out) having a play day only to get mixed up with more Felix biological sister stuff. Allow me to use Felix to show you how I feel about this story line. 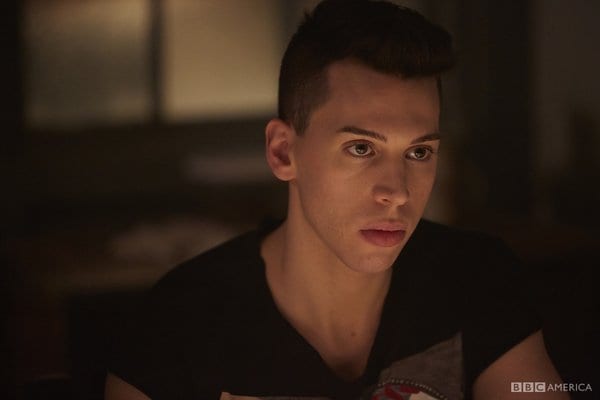 I was pleased to see that the team called an audible this week when Sarah was unable to go with Donnie to the Bright Born orientation. Based off her actions this season, Sarah has been all over the place and bringing her to this Bright Born program just seemed like a recipe for disaster. While things didn’t go as smoothly as planned one has to think that the inclusion of Sarah could have been explosive. Bringing Cos in off the sidelines (nice John Fogerty reference) not only was the right call, but made sense as she would be the one clone to really understand what it is Bright Born is trying to do. Which as we discovered was pretty horrific stuff and rather upsetting.
Genetically modifying babies sounds like a great idea on paper I suppose. My original thought was that the Neos 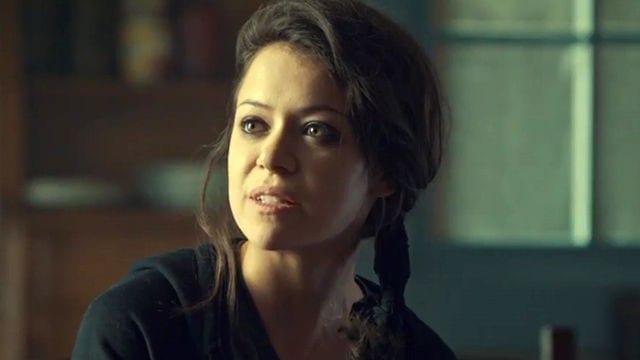 were going to be implementing babies with tails and  other physical modifications, but what they’re actually doing is trying to create a super human. Bright Born is there to give you a baby that won’t have any problems. Croup? Nah. Allergies? Who needs those?! General baby illnesses? Get out of here with that noise. At Bright Born we specialize in giving you a baby that’s already adapted to the world around it and looking to become your genetic overlord. Sign up today!

As Cos points out to Susan Duncan though these modifications are incredibly dangerous. I’m not going to pretend to know the science because science was never my strong point, but it seems that all these modifications leaves the door open to a lot of possibilities of failure before the correct genetic code can be found. Which begs the question what is happening with these failures because it seems that you wouldn’t be able to tell that things didn’t work out until the baby was born. You’re promising these families super babies in a sense and what happens when the baby isn’t so super?

As we saw through Cos’s snooping, horrific things. Watching that birth scene was a bit traumatic for Cos (and for me I might add) and was one of the two major acting highlights from Tatiana Maslany. It seems that Bright Born is paying a group of women to carry babies with the chance that these babies could be genetic failures. Don’t worry though; these women are getting paid handsomely. What’s nine months and a possible monster baby if you got cold hard cash. Say what you will about these Neos but they sure have that emotional investment in people down. The birth that we had the, ummm, pleasure of witnessing was one of those failures and the baby that was born was something to behold. Once the baby was discovered to be a failure it was whisked away where one would assume tests are to be run on it to discover what went wrong. My only question becomes, what happens to these babies after they’ve been tested? Are they allowed to live? I got this weird impression that Bright Born is discarding these infants and using them mostly as test subjects. I found the whole thing rather upsetting. I mean… they’re babies. 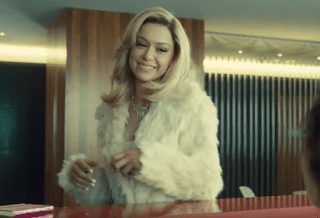 Susan Duncan, who was hip to Cos being there the whole time, pulls Cos out of the birthing room and more or less gives her the all tomato (sorry, Community reference) which was a better situation then what I expected. Evie Chow alluded to what happened to Beth when she was snooping around, and it seemed that they were implying that outcome for Cos (don’t you touch one hair on that beautifully dreaded head you monsters!). Luckily Susan wants Cos to help them find a cure for the clone disease. Susan really tried to play the part of “what we’re doing isn’t so bad and you can really make a difference if you give up the source” speech, and she seemed to touch on the nerves of Cos, who is now in a bit of a pickle. We’ve known for awhile that she’s dying and that this disease is something that could put her sisters in jeopardy too, one has to wonder if Cos would do this for the greater good?

Elsewhere Sarah and Kira have a play date which leads them to Uncle Felix and his biological sister, Adele (no, still not the one you’re thinking of). I’ve been pretty much over this storyline and it seems that the writers could be too as we get our definitive answer on whether or not Adele is Felix’s sister (spoiler alert… she is). Sarah grabs a brush and a glass and sends them to Scott (or is it Steve… sorry, Lost reference) to have them tested as she’s convinced that Adele is a Neo plant. Doesn’t help that the company they used to find each other is linked to the Neos. Oh joy! The discovery scene was pretty terrific though as Sarah had to eat crow (another phrase I use only in writing) with Scotts confirmation phone call. Tatiana Maslany killed here as she tried not to let the embarrassment/shame/guilt/sadness overcome her. This woman deserves all the awards all the time.

Here are some other highlights from this week:

There you have it Geeklings. Half way through and things are really starting to pick up. What did you guys think of this week’s episode? Let it fly in the comments below and I’ll see you here next week!