‘Sup readers? Welcome to another installment of On The Shelf, Fan Fest’s regular (barring some exception) book column. If you read this on any sort of regular basis, you know how it works: there are no limits to the kind of book I’ll review, as long as it’s new. For instance, this week’s review is for the collected edition of a comic, next week’s will be a new adult romance (because apparently torturing myself is a hobby). The whole point of this column is to help you, friends, decide which book is worth, not only the monetary investment, but prime shelf real estate. With Thanksgiving officially wound down, and the holiday season officially winding up, a lot of people will be looking for gifts, whether the people in their lives are acknowledged bookworms, geeks, or just individuals who can appreciate a good story when they read it.

This week’s book is Paper Girls, a nostalgia-soaked sci-fi trip from massively-acclaimed, award-winning author Brian K. Vaughan (want more of his work?) and breathtakingly-talented artist Cliff Chiang. Matt Wilson is responsible for the veritable feast of colours, and Jared K. Fletcher worked on the lettering, which ties the book together, making it an especially pleasing entire package.

Paper Girls has been out for awhile. It’s won two Eisner awards (additionally, this year, Wilson won an Eisner for Best Colourist) and was shortlisted for the 2017 Hugo Award for Best Graphic Novel (an accolade which ultimately went to Marjorie Liu’s Monstress) It currently has 17 single issues to its name and two trade paperbacks. But this week, Image released its first deluxe edition: the first two arcs of the series, contained in a highlighter-pink hardcover book that is near-impossible to resist (I preordered it, and that came with a hefty price drop, so the price might be a deterrent for some).

But before we get into the meat and potatoes of the review, I’m going to take a moment to appreciate the quality of the physical book itself. I’ve gone on record gushing about Image’s binding, the quality of the physical books they publish is, for me, unmatched. Their trades are wonderful, but their deluxe editions are worth every single dollar they ask for. Paper Girls: Book One is yet another example of their attention to detail and commitment to quality. Every time I look at that eye-searingly pink cover, with its silver script and a hodgepodge of artwork decorating both sides (the main characters on the front, a group of aliens crowding the back), I grin. On the outside, it’s sure to rivet eyeballs to your shelf, and the binding is exceptionally sturdy. One thing the book doesn’t elaborate on (which I enjoy, actually) is a summary of its contents. There’s nothing on the back or inside flap that gives a hint as to what Paper Girls is about, not even praise from a reviewer to tout its merits. So if you’re only just coming across Paper Girls for the first time with Book One, you’ll be walking in blind. Which is kind of fun, to be honest!

Paper Girls follows a group of preteens in the 1980s; they rise before dawn each morning and make their regular routes to deliver the paper to the citizens of Stony Stream. On November 1st, 1988, their lives are changed forever via the discovery of extraterrestrial technology, and creepy aliens invading their hometown. 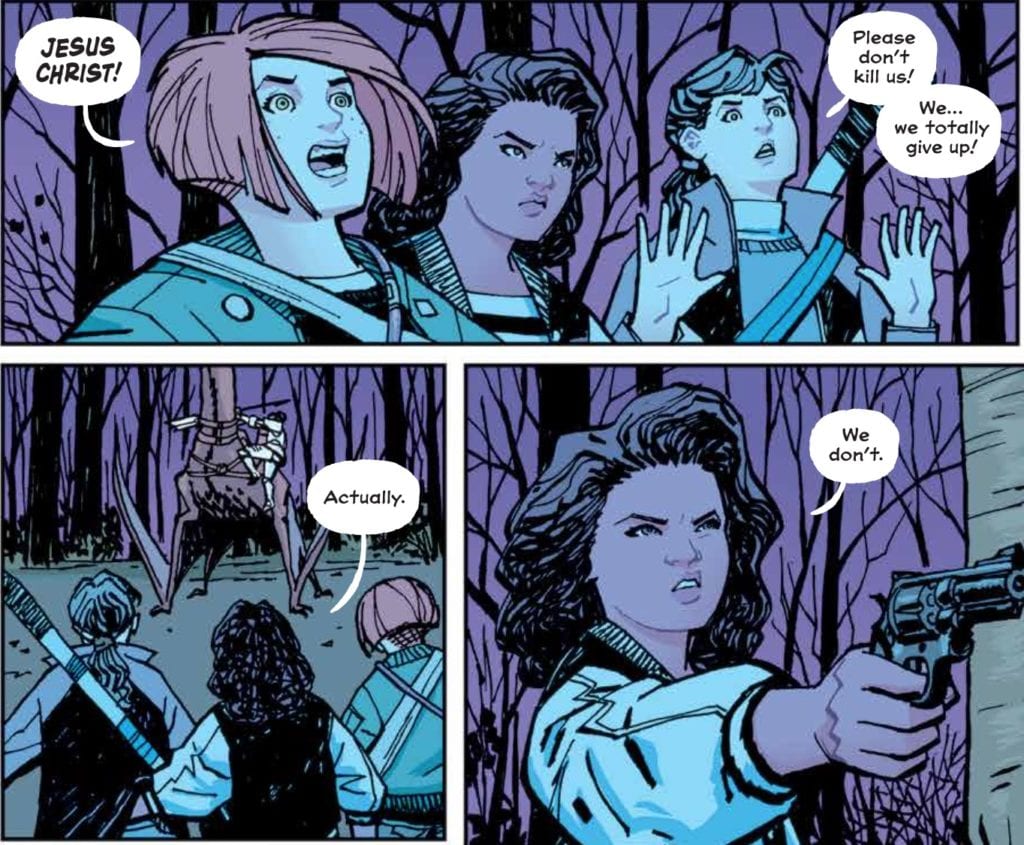 Honestly, this book was so much fun. The realistic dialogue, exemplary illustrations, and those beautiful, beautiful colours, all bolstered by the expert lettering, combine to make an almost-perfect book. Almost.

Paper Girls definitely gives off Stranger Things vibes, so if you’ve just finished binge-watching The Duffer Brothers’ show (again. It’s okay. I’m a repeated binge-watcher too) and you want something like it, you might want to check this out. The main characters, all girls, are a little older than the Stranger Things party, but this series angles for the same brand of nostalgia with a scifi/mystery twist. If you’re into any of the above, this is worth at least checking out the first trade and giving it a fair shake.

But. I can see why people wouldn’t enjoy Paper Girls. Speaking only of Book One, since that’s the edition I have, it took a good five issues (half the material within) to feel connected to any of the characters. Sometimes the story felt like one giant, uncomfortable cliffhanger where no questions were ever answered, but more arose. I personally think this worked in the story’s favour, and eventually, the characters did win me over as much as the intriguing plot, it just took time (if you have the wherewithal to read The Sculptor, a brick of a graphic novel, you can get through Paper Girls).

Still, this book is fun enough and shows great promise as an ongoing. I absolutely recommend Paper Girls Book One for your shelf, or even your Kindle, or ComiXology account, if digital is your preferred way to read. If you want to get yourself a copy, click here.