Geeklings, a very Happy New Comic Book Day to you all! My NCBD started off a little differently than usual. I woke up a little late this morning so I was unable to workout and read some of today’s new books. Tough choices needed to be made and I chose workout (#gettingintoweddingshape) which meant I had to push back reading until lunch. Food and comics are an adequate substitute for early morning comics I suppose. At the very least it helps make the workday more enjoyable.

On top of that, there’s the off chance that I could be coming down with a summer cold which would be a bag of suck. I won’t be sick enough to stay home, read comics, and finally start watching The Boys. I mean, it’s just a cold. So I ask you Geeklings, what’s even the point? What’s. The. Point.

These are my problems though and there should be no problems on New Comic Book Day. There should be nothing but comics and since this is the Pull List let’s start breaking some down. There are some serious heavy hitters out there this week. Starting with… 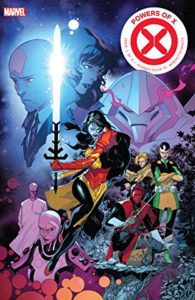 Powers of X #1- If last week’s House of X was any indication then this is a super exciting time to be an X-Men fan. In the last week, I’ve had more positive, buzz fueled, X-Men conversations then I’ve had in years. With one issue, Jonathan Hickman has changed the game and opened up a world of new possibilities to all things mutant. Is that really Professor X under that helmet? Are the X-Men acting kind of like a cult? Are they becoming villains? Is that even the X-Men?! These are all conversations that have stemmed out of one issue and for those who need more it’s a good thing issue one of Hickman’s companion book is out today. And let me tell you Geeklings, he’s taking things to a whole other level. Companion book might not be the right term as Powers of X (pronounced Ten) takes some of the ideas and concepts of House of X and begins to expand upon them. The future is the present and the past is the future and all other mind-melting time travel-related ideas. What is mapped out in these pages is incredible and massive and could change everything we know about the X-Men. It certainly changes House of X to a degree. I walked away with one thought in mind… I need more. 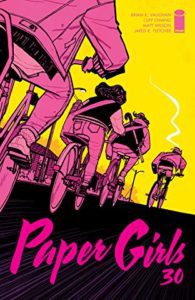 Paper Girls #30– If X-Men time travel wasn’t enough time travel for you then please turn your attention to the final issue of Paper Girls. Brian K Vaughan’s half ’80s nostalgia trip, half Stranger Things vibes, tremendous character work, and beyond enthralling story. Sadly, that story reaches its conclusion in this double-sized issue. The penultimate issue ended on a bit of a cliffhanger with the girls being sent back to their original timeline with no memory of the events that unfolded within these pages. And while it was heartbreaking for them to not get their goodbyes as their bond will most likely vanish once the timeline is restarted, there has to be more. With this being a double-issue and Brian K Vaughan being Brian K Vaughan there almost guaranteed to be more. What can this mean for the timeline and the war on time travel? What does this mean for our core four? Can the future actually be changed or is everything as predestined as we’re lead to believe? One things’ for sure, I’m going to miss this book. 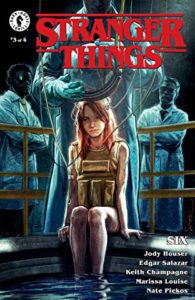 Stranger Things: Six #3- If you’re like me then you miss the hell out of Stranger Things. I’ve got two episodes left on my season three re-watch and I’ve been kind of putting it off because I don’t want the season to end…again. If you need a fix on Hawkins, Indiana then please give Stranger Things: Six a read. Taking place before the events of the show and expanding on the MK Ultra experiments we get a real look behind the curtain on just what Doctor Brenner was up to in Hawkin’s Lab. A book filled with a bunch of fun easter eggs that expands the mythology of the show becomes a can’t miss. Don’t be a dingus. 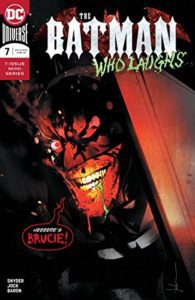 The Batman Who Laughs #7- This is it, the stunning conclusion of Scott Snyder and Jock’s mini-series, The Batman Who Laughs. I think it’s safe to say that this book, much like Batman, has been out of its mind. Batman is being consumed by the Joker virus and all of Gotham seems to be on the cusp of falling to the Batman Who Laughs and the Dark Multiverse. Expect a number of huge answers in this finale, like if this is the main continuity Batman, as well as setting up a new series from DC. Scott Snyder’s Batman farewell tour takes one more step closer to the finish line, but he won’t leave until he’s tested Batman in every conceivable way possible. 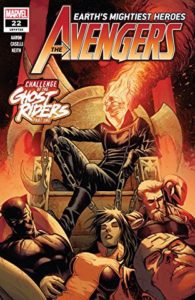 Avengers #22- Jason Aaron’s Avengers run has been filled with dead Celestials, vampires, deals with the devil, and now it’s time for a trip to hell. Literally. Prepare yourselves for the “Challenge of the Ghost Riders” as Robbie Reyes is looking to get out of the game and what better way than doing that then being giving his demon car an exorcism? The only problem is Johnny Blaze, also a Ghost Rider and now the King of Hell, has some big plans for Robbie. Get ready for an acr that will manage to satisfy alllll your Ghost Rider needs… and then some. 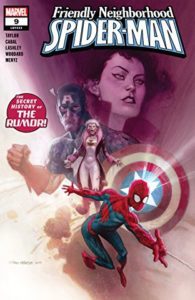 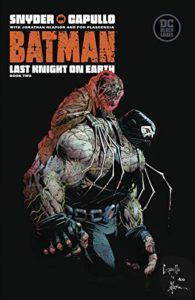 There you have it Geeklings, all the best books to get your mitts on this week. As always, if you feel that I’ve left anything off of the Pull List be sure to sound off in the comments. If you’d like to talk more comics with yours truly be sure to throw me a line over on Twitter @iamgeek32. Now if you’ll excuse me, I’m going to take some meds and crumble under the weight of this clearly dramatic and devastating summer cold. I’ll see you all next week. Happy reading and many huzzahs!