NBC’s newest series, Midnight, Texas premieres July 24 at 10/9c, and since the premiere is so close, the embargo has been lifted on our visit to set earlier this year! I was able to sit down with Charlaine Harris, author of the book series that the show is based on (and author of the Sookie Stackhouse series that HBO’s True Blood was based on), to talk about her inspiration behind this new story, how the Sookie Stackhouse books influenced Midnight, Texas, and more!

Do you remember, and this was probably a long time ago now, do remember some of the germ of this, this concept, what triggered the whole thing?

Charlaine Harris: I do. When the Sookie books ended, I was kind of out of gas and I wanted to write short series and I thought, “What could I plummet on?” and I thought, oh, my mother grew up in Texas and every summer I would go with her to this small hotel my grandparents owned in Rocksprings, Texas, nowhere. It’s on the Edward’s Plateau, it is very desolate. If you think this is desolate, you should see that. Every summer they had a rodeo and July and the hotel was filled with people who were mostly drunk and it was the worst time of year and the best time of year for my grandparents.

Their three daughters would come help them keep the place running during that very hectic time and of course, my mother would bring me and my brother with her and Texas was a real challenge for me, the terrain was so different. I grew up in the Mississippi Delta. The society was different and the people were much tougher, much tougher and they had different goals. I felt like an alien and I thought, “You know, that was an interesting feeling to be an alien in your own country,” and it kinda grew from there.

You know, at first, there wasn’t gonna be anything supernatural in “Midnight” but I thought, “What the hell?” I just missed the supernatural elements and it seemed to me like the story would be so much richer if I used them and that it would make their bonding so sensible or so reasonable. So it just evolved. It just evolved and when it got to the cat, I had this big debate, big debate, I thought, “I think the cat can talk,” and then I thought, “No, that’s too cheesy, nobody will buy that,” and I thought, “But I think this cat can talk,” and finally the cat talked and I thought, “I just have to leave it in. This is too good, that’s too good.” Since then, people have told me that’s your favorite things about the books. Of course, there’s probably people who just hate it who were nice enough not to tell me that.

Since you were so tired after the Sookie books, did you feel creatively reinvigorated now with this new concept?

Charlaine Harris: I did because I was telling it from the third person. Before, first person point of view was my bailiwick. Third person, some of the points of view were male, I had never done that and I thought, “I’m just gonna do something completely different.” A friend of mine said, “Charlaine, you always do what you’re scared of.” That’s pretty much true, though I had never made myself sound that good in my head. I do try to do what I’m scared of and something that has to jolt me out of that track. I think there’s nothing that’s more alien to me than writing the same book over and over.

Will the show spark new books you think?

Charlaine Harris: That’s a complicated and a simple question. I might write another Midnight book but my publisher has not asked me for one, so there you go. 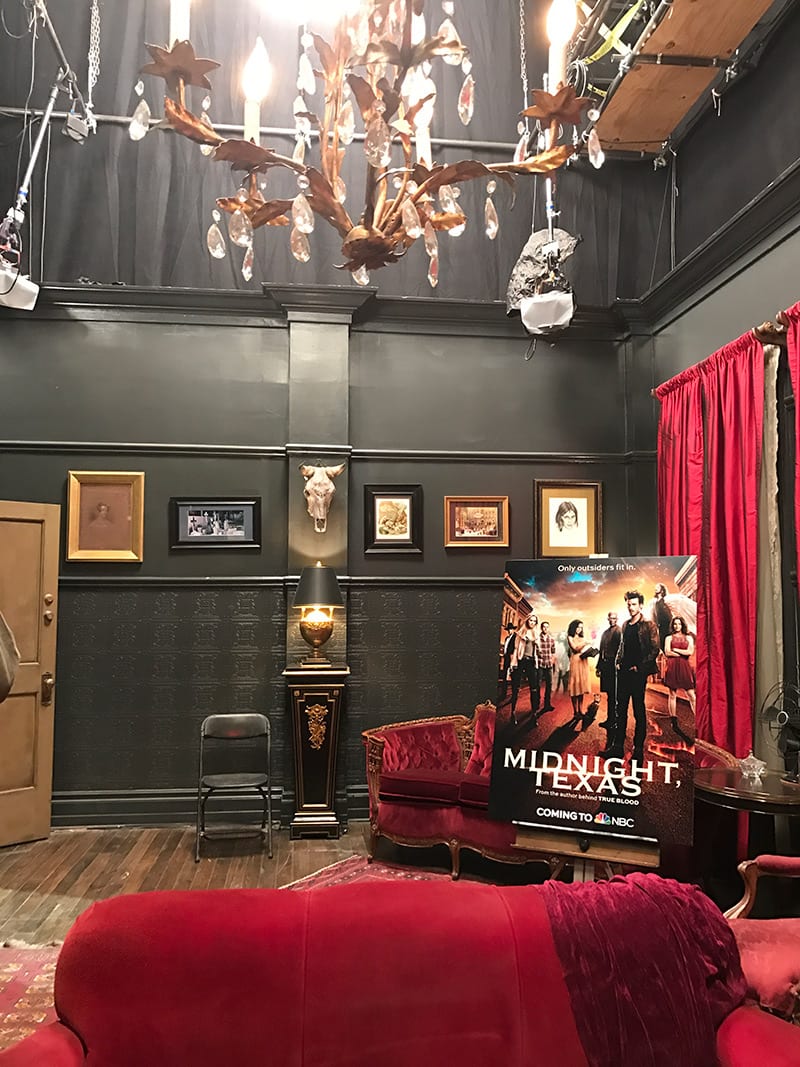 How involved with production have you been on this?

So you don’t feel precious about changes?

Charlaine Harris: No, if I did, I would never had allowed my wonderful Hollywood agents to sell the books, that would be weird. Why do I want them to sell the books? I want people to come back and buy my books, that’s my goal. What the show does, is its own goal, if that makes any sense. They’re pursuing their own ends. I just want people to say, “By Charlaine Harris. Hey, I’ll buy that book,” and I’m going, “Yes, that’s what I want.”

Who was the most difficult character to develop within your books, within these books?

Charlaine: Well, I’ve gotta say, I never took the Rev’s point of view because he was a very mysterious character to me, even though I was writing him. Finally, I thought, “Okay, he sees the Bible very differently from the way we see the Bible. He sees the Bible as interpreted through the animal scenes.”

Wait till you see the art. It will knock your socks off. I thought he interprets the Bible from what happened to animals in the Bible and that’s a very different point of view. He wasn’t one of my voices and I was kinda glad ’cause that would have been very tough, but I had to keep him mysterious and tense because that’s him.

So continuing off of that, which one of the characters gives you delight or is easier or you have fun with?

Charlaine: Well, Fiji was always fun. In the book, she does not know the full extent of her power until later on and I just loved watching her grow and she made brownies for everybody and she loved to bake. I just enjoyed the fact that she was trying to live a very normal life in a very abnormal situation and that she was also secretly powerful, “Yes!”

Charlaine: They do, yeah. Realistically, I have to say they do, even though I don’t think of myself as a bragging person, but obviously, there’s something in them that people connect to. I don’t know. I don’t know what it is. I would have done it much sooner because I had a pretty long career before I started writing Sookie. I would have done it 15 years before that if I’d known I could do it.

I think just writing the right book at the right time with a character that a lot people identify with or a lot of people can feel sympathy with. You know, a blue collar woman, who doesn’t have much education, she’s trying to make her life better, she has a disability, and yet, she manages to create a very rich, rewarding, and terrifying life for herself. I just think she would be okay at the end of the books if she never had another man, she will survive. That was my point, she made a great life for herself and I just … I guess a lot of people really, that resonated with them and of course the guys, they like the sexy guys.

This series has the benefit of being produced in a bubble, in the sense of they’ve produced all the episodes, they’ve written all the episodes. Does that make it easier? Now they’ll put it out there and people will either like it or not like it.

Charlaine Harris: Like or not. Every now and then I get a letter from a reader or really an email, of course … you can tell how old I am, letter, huh, by people saying, “Oh, did you know she was a werefox on one page and something else on the other,” and I’m going, “I don’t care.” There’s nothing I can do about it now. Am I gonna buy back all the books and mark it out and write it in? I never know what people like that expect. I think, “What was your goal in telling me this, right? You wanted me to feel a little bad or a little stupid?” I make mistakes and it got past the editor and the copy editor and my beta readers. It got past all of them, so you know, mistakes happen, what can I say? But they can hardly wait to tell me … you know, the book comes out, the next, the next day.