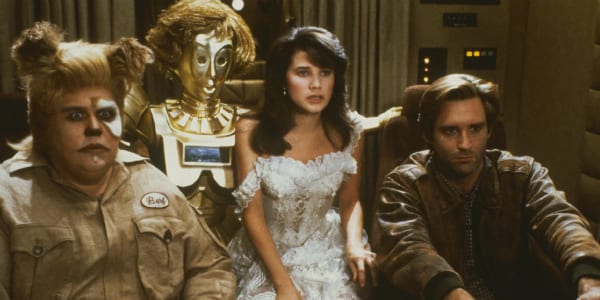 “May the Schwartz be with you!”

Filmmaker and comedian Mel Brooks visited the New Jersey Performing Arts Center this past weekend to host a screening of his film Young Frankenstein.  After the conclusion of the film, Brooks hung around to answer questions from the audience.  When one audience member yelled out, “May the Schwartz be with you,” we are pretty sure they weren’t expecting this type of response from Brooks.

After the audience member called out, Brooks chuckled, repeated the line and then proceeded to tell the audience some developing news which we have been waiting YEARS to hear!  Apparently, Brooks has been having discussions with MGM regarding a potential second film to his 1987 comedy classic Spaceballs.

Part of the reason why the original Spaceballs film was so well received, aside from Brooks being a comedic genius, was because the film was riding on the coattails of the original Star Wars films.  Brooks hinted that, because of the incredible success of the new Star Wars films and the lasting and continued success from the franchise, as a whole, perhaps, just maybe, there may also be room for that Spaceballs magic to happen once more.

“MGM is slightly interested in doing it because of Star Wars Rogue One and The Force Awakens and the new Star Wars explosion. So they think maybe, so we’re talking, who knows.”

Check out the video from the NJPAC of Brooks’ statement:

So… will there be a Spaceballs 2?! #MelBrooks says… pic.twitter.com/Ei89hTJLD7

Sadly, some of the cast has passed away, like Rivers and Candy, which would leave a massive void in the film, if it was to be a sequel. After all, what would Spaceballs be without the Mog (half man, half dog) Barf!  He was his own best friend and one of our favorite characters from the film.

We are always weary of the word “reboot” especially when it comes to classic films like this one.  If this film was rebooted, the potential for some awesome cameos from the original cast is pretty much what is giving us hope for this project.

Personally, I am still waiting for History of the World Part II (and I’m pretty sure I’ll have to continue waiting for that one) but, I suppose a second Spaceballs would be just as great.

What do you think of another Spaceballs film being in discussion?  Let us know your thoughts in the comments below.