In addition to creating some of the most legendary and beloved superheroes of all time, Marvel’s Stan Lee, who passed away this morning, loved making cameos in the big (and sometimes small) screen adaptions of his work. To honor and pay tribute to his creativity both on the page and in front of the camera, we’ve gathered up as many of his cameos as we could. We will forever miss Lee and his brilliant mind but are eternally grateful for his passion and dedication to the craft that led to all of these amazing cameos.

He appears at a trial in the NBC TV movie.

He played a hot dog vendor who was on the beach when Senator Kelly surfaces from the water.

He saves a young girl during one of the Green Goblin’s attacks.

He’s saved by a young Matt Murdock while walking down the street reading the newspaper.

In his first speaking cameo, Lee appears alongside Lou Ferrigno as a security guard.

He saved a woman from a falling piece of rubble.

He plays a mailman named Willie Lumpkin who greets the Fantastic Four.

Lee is seen watering his lawn before becoming mesmerized by Jean Grey’s telekinesis.

Lee plays a wedding crasher who gets turned away at the door.

He’s seen chatting on the street with Peter Parker.

He plays a Hugh Hefner-inspired character.

He gets gamma radiation poisoning after enjoying a nice lime green soft drink.

He plays a man who Tony Stark mistakes for Larry King.

He plays a truck driver who attempts to move Thor’s hammer.

He plays a WWII general at a press conference.

He’s playing chess while being interviewed by the news.

He plays a patient in a mental institution.

He plays a Smithsonian security guard who fears for his job after Cap’s suit is stolen (by Cap).

He is in the crowd at Peter’s graduation.

He’s seen flirting with a woman by Rocket Raccoon. 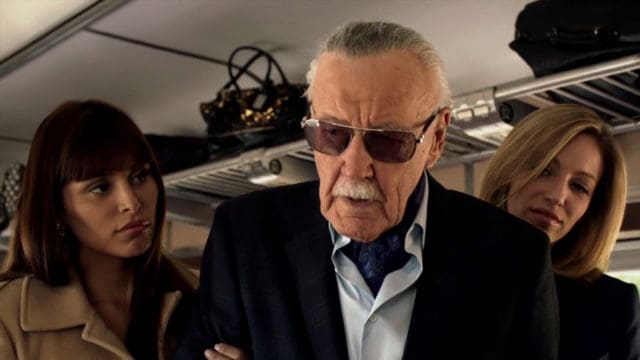 He played a man on the train who talks to Jemma Simmons and Agent Coulson.

He popped up in season 1 while sitting next to Dominic Cooper’s Howard Stark.

He played a drunk veteran who is escorted out after a little too much Asgardian liquor.

Lee appears during Luis’ storytelling scene as a bartender.

He plays an emcee at a strip club.

He played a Fed-Ex delivery guy.

Lee was joined by his wife Joan for the scene where Apocalypse launches all the world’s nuclear weapons into space.

He’s on the bus reading a copy of The Doors of Perception during the battle between Doctor Strange, Mordo, and Kaecilius.

He played an astronaut informant for the Watchers. The cameo was meant to confirm the fan theory that all of Lee’s appearances were connected.

Lee played Gary, a gentleman who yells at Spider-Man for causing a commotion.

Lee popped up on the Fox series as a patron leaving Tex’s Lounge.

He also appeared as a limo driver in the first episode of the Hulu series.

He played a “thirsty gambler” collecting his winnings.

Lee appeared in a marketing video/teaser for the film and also was featured on a mural in the film as Domino skydives.

Lee’s car is shrunk right in front of him, leading him to say “Well, the ’60s were fun, but now I’m paying for it.”

Lee makes a brief appearance walking his dog, telling Eddie “Don’t give up on her … either of you.”