The critical and financial success of Black Panther, while not unexpected, has been astounding to watch unfold. All over the world millions of people stood in some really long lines to journey into the stunning world of Wakanda, King T’Challa, and his army of badass female warriors. The movie continues to break box office records left and right, so you can imagine that director Ryan Coogler has been trying to wrap his head around it for the past week.

Coogler took to Twitter on Tuesday to share a moving letter that he penned, expressing his gratitude towards all of the film’s supporters, the team that helped make it happen,  and the awe he’s felt throughout the entire ride.

You can read the whole transcript below:

I am struggling to find the words to express my gratitude at this moment, but I will try. Filmmaking is a team sport. And our team was made up [of] amazing people from all over the world who believed in this story. Deep down we all hoped that people would come to see a film about a fictional country on the continent of Africa, made up of a cast of people of African descent.

Never in a million years did we imagine that you all would come out this strong. It still humbles me to think that people care enough to spend their money and time watching our film. But to see people of all backgrounds wearing clothing that celebrates their heritage, taking pictures next to our posters with their friends and family, and sometimes dancing in the lobbies of theaters often moved me and my wife to tears.

For the people who bought out theaters, who posted on social about how lit the film would be, bragged about our awesome cast, picked out outfits to wear, and who stood in line in theaters all over the world, all before even seeing the film…

To the press who wrote about the film for folks who hadn’t yet seen it, and encouraged audiences to come out…

And to the young ones, who came out with their parents, with their mentors, and with their friends…

Thank you for giving our team of filmmakers the greatest gift: The opportunity to share this film, that we poured our hearts and souls into, with you.

Coogler has often received critical acclaim for his other films such as Creed and Fruitvale Station, both of which starred Black Panther antagonist Michael B. Jordan, but neither of those sparked the cultural moviegoing event that Black Panther did.  Stan Lee, who created the character of Black Panther, and Disney CEO Bob Iger also wasted no time praising Coogler for what he helped the film to accomplish. 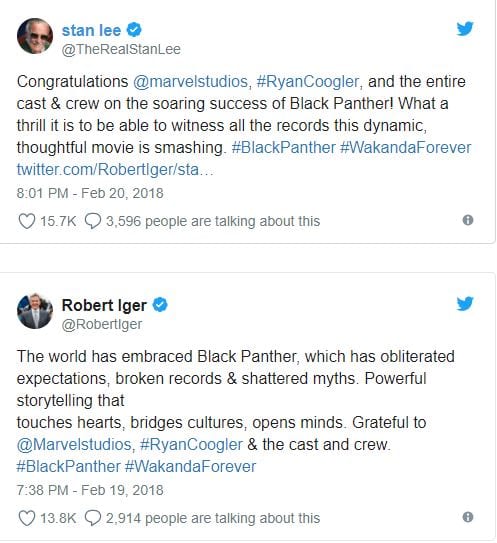 Black Panther is currently in theaters and continues to break all the records!

‘Black Panther’ Review: The Fine Line Between Hero and Villain

‘Black Panther’ Becomes Most Tweeted About Film of 2018