Full disclosure, I completely forgot that I even put in for a Destiny 2 Loot Crate. In fact, I haven’t even played the game in months. So imagine my surprise when one would arrive at my door. It seems like ages ago that we were all excited for Destiny 2, and then ‘Curse of Osiris’ happened, which brought the game to an all-time low. The game has slowly started to improve and their Fall DLC “Forsaken” actually looks pretty interesting. So I’ll give this Limited Edition Loot Crate a shot – especially since I said I would half a year ago.

I’m not going to pull any punches though. So let’s see if this Loot Crate lives up to the initial hype, falls like Curse of Osiris or actually gets us a little excited for the future. 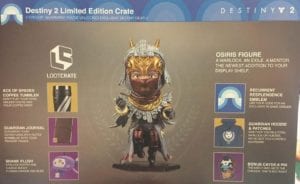 Destiny of course has their own set of Loot Boxes in-game called Engrams, and when decoding (aka opening) you can view the potential rewards. This Loot Crate similarly contains a handy little card showcasing all the items found in this case. The only difference is, you get all of them.**

I will now detail each item in ascending order of enjoyment: 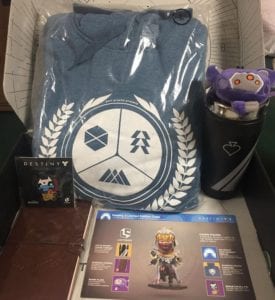 **Osiris Figure – Contrary to what the contents card said, I did not actually receive an Osiris figurine. I was informed that there was a supply shortage and thus not every crate could receive one. Though considering I don’t have room for figurines, I’m actually very okay with this.

Overall, this Loot Crate was quite enjoyable. In fact, it actually made me turn Destiny 2 on for an hour last night – and now I’m looking up other Loot Crates. Both Bungie and Loot Crate did pretty good with this collaboration. Although there is still one feeling that I can’t shake in regards to “timing”… As I said previously, this crate comes before the ‘Forsaken’ expansion, which (hopefully) looks like it could revitalize the game. Though it’s the subject – or rather catalyst – of ‘Forsaken’ that really has an interesting timing with this crate.

Even though it was announced with the ‘Curse of Osiris’ DLC – thus the figure – this crate has a LOT references to ‘Forsaken’. Besides the Shank Plushie to represent the Fallen focus of the DLC, it also has 2 references to Cayde-6 (the pin and the mug based on his iconic weapon, the Ace of Spades). This is important because in the ‘Forsaken’ teaser we see Cayde gets killed… by his own weapon. . . .

Did they plan this specifically? Is this a preemptive ‘in memorium’? Did this just happen? Either way, TOO SOON BUNGIE!!!!!!!