This past weekend was TwitchCon, and at it Bungie finally was able to answer some questions on what “Seasons” mean in the game as well as when / what changes will be coming to the game outside of it’s planned “Curse of Osiris” expansion DLC.

What Are Seasons & What Do They Affect? – Clans, Bright Engrams & Toolbox:

If you’ve been playing Destiny 2, then you might have wondered at some point or another what the game means by “season”. Does this mean Year 1 Year 2 or does it actually mean that each season (ie: fall, winter, etc) will have a different theme in the game. Well thanks to TwitchCon we now know that “Seasons” do indeed mean literal seasons. So when your Clan Banner shows your progress for “this season” that means that it’ll reset sometimes in December to Season 2. Once Season 2 starts, you’ll have to work your way up the Clan ladder again to earn a bunch of new themed rewards and perks. For example, Season 1 had a focus on the Cabal but Season 2 will focus on a different enemy class (I’m still bettering Vex). Though all your Season 1 progress won’t be forgotten as if your Clan achieves max rank, your Clan will get a special staff moving forward. And if you haven’t reached your max rank yet, no worries! Bungie hinted at a special event called The Clarion Call which will award clan members x2 EXP when playing together.

Though Seasons just don’t affect Clans. Season changes will also serve as the times for Bungie to Update the toolbox – ie: weapon functionality, etc. For example, right now Pulse Riffles stink in PVP but perhaps Season 2 will buff them – or at least nerf some other overused PVP guns like Mida / Uriel’s Gift. In addition to these changes, Seasons will also add at least one new multiplayer map per seasons as well as update loot tables for items such as Bright Engrams – meaning that Emotes, Ships, Sparrows and other cosmetic options will rotate every season.

Though beyond the general Season 2 changes, there will also be some specific changes enacted concerning Destiny’s 2 largest recurring events. For starters, Iron Banner will be fixed and have better loot drops as well as the option to purchase weapons outright. Additionally, armor from Iron Banner and even other events like Trials of the Nine will have unlockable ornaments. The downside to all these updates is that they won’t take place until Season 2, so there’s still one more lackluster Iron Banner planned for this Season. 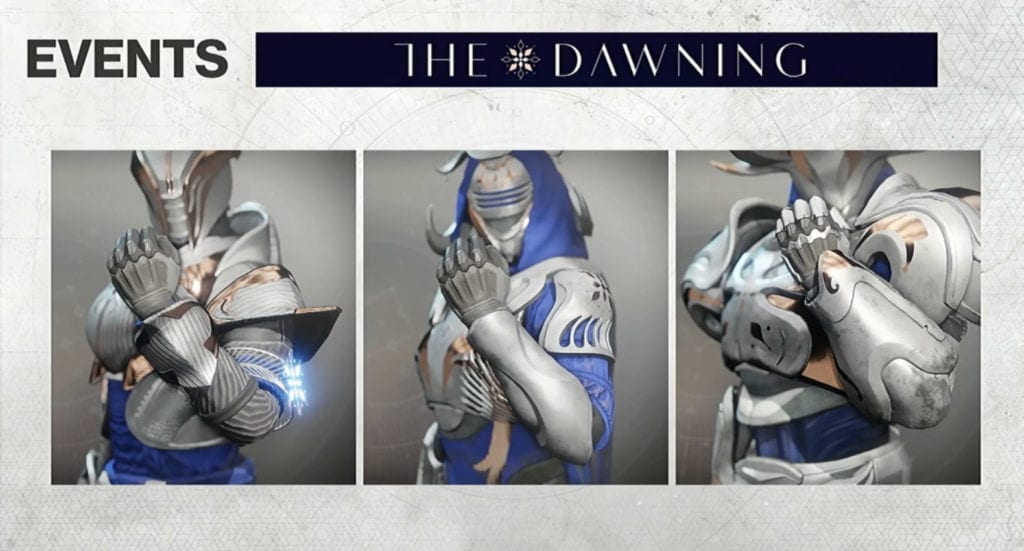 As for Faction Rallies, they’ll also be moving away from the “token economy” that the rest of Destiny uses to claim rewards. Now you’ll be able to earn some faction armor and loot by representing your faction in general. Though again, this won’t come into effect until Season 2.

Sadly, this year will not give players a Festival of the Lost – Destiny’s Halloween Event – but there will be a return of the Holiday event titled The Dawning, and with it plenty of fun additions. You’ll of course be able to collect a load of Dawning Armor pieces for your characters – most likely from Bright Engrams and/or Gifts to be opened. Additionally, players will have a new ice hockey minigame to play. It’s doubtful this will be a full game mode (ie: like Sparrow Racing) but rather a small casual game such as how players are usually kicking balls around the Tower or Farm. Though the biggest/ most fun addition of the Dawning actually appears to be snowball fights.

No, you did not misread that. You’ll be able to throw snowballs at fellow Guardians and actually damage them. It might take a bit of getting used to, but this could become an incredibly fun event. In fact, snowballs will also be available outside of social spaces and can be used on enemies. Imagine if getting snowball kills in Strikes actually becomes a thing! If it does, there better be a prize associated with it. Actually, on second thought… don’t go too crazy with that Bungie. Imagine needing to get snowball kills on Ultras in a Nightfall!