Deadpool 2 has officially arrived in theaters nationwide, and the Merc with a mouth is taking the box office by storm! Directed by David Leitch, Deadpool 2 introduces some brand new characters as well as reunites all of your favorites from the first film for another round of action-packed, sarcastic, fourth-wall-breaking fun! The film stars Ryan Reynolds as the titular Deadpool/Wade Wilson, Josh Brolin as Cable, Zazie Beetz as Domino, Julian Dennison as Russell/Firefist, Morena Baccarin as Vanessa, Brianna Hildebrand as Negasonic Teenage Warhead, Karan Soni as Dopinder and Leslie Uggams as Blind Al.

We had the honor of speaking with the iconic Tony and Emmy-Award winning Leslie Uggams just ahead of Deadpool 2‘s theatrical release. Leslie talked about her impressive career, her discovery of Blind Al and the Deadpool universe, what it was like working on set with Ryan Reynolds and much more! 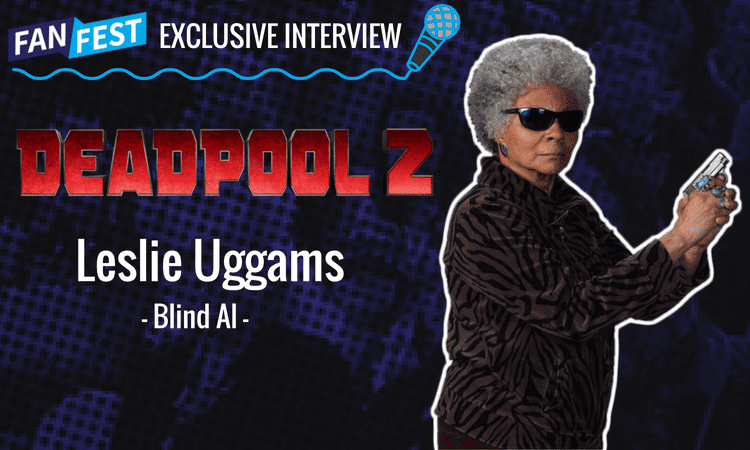 Denise Caputo: Before we get into talking about the new film, your career is just so highly impressive. I mean, you’re a true industry legend! I would be remiss not to at least touch upon the rest of your work before we speak about Deadpool 2. One of your most notable roles that stands out to me is Kizzy Reynolds in the iconic television mini-series Roots. Even before that role, you were a real trailblazer in the industry. Can you talk just briefly about how your early work has inspired your path throughout your career?

Leslie Uggams: Thank you. Well, at the time it’s all happening you’re just going out there trying to do your best. The wonderful thing when I look back at my career is I’ve been able to do roles that convey strong, independent women under all kinds of adversity. I’m very proud of that. Kizzy was an amazing character to play because under her circumstances she still was her own woman in that kind of toxic atmosphere. She was determined to raise her son right, and I thought she did a great job in raising her child. Also, in my first Broadway show, I got to play a character named Georgina in Hallelujah, Baby! That was an incredible, inquisitive character that, under her circumstances, was determined that she was going to be better and strive for the sky and see what happens.

I’ve been blessed that way. Of course, as a kid, I was blessed because I got to work with Louie Armstrong and Ella Fitzgerald, and people like that – to watch them make magic every show that they did. Me being able to be a part of that, to be able to observe that is better than any school that you could possibly go through to try to learn your craft.

DC: That’s so amazing! Now, you’ve taken on the role of Blind Al in Deadpool. Were you familiar with the Deadpool comics or with the storyline before taking on the role?

LU: I had no idea. (laughs) I had no idea what I was auditioning for, and I was trying to figure out, “Who is this?” Then finally, I thought to myself, “You know, I think she’s blind.” (laughs) I had no idea about the Deadpool comic books. Once I got the role, then I learned more about the character. When I was finally able to publically say, “I’m going to be doing this,” because it was very “hush-hush” for the first film we did, I told my son he went, “Mom, this is HUGE!” I just responded, “Oh. Okay.” (laughs) He said, “Are you kidding?” He’s a big Deadpool fan unbeknownst to me. I didn’t even realize it. He used to read all the comics and everything. My relatives are all very impressed. Here I am in a comic book movie playing Blind Al, and it’s just a wonderful, amazing ride. I’m having a ball.

DC: That’s great! In the movie, Blind Al doesn’t really have a backstory, but I know that there is at least the beginnings of one.

LU: Yes. She was basically in a box. Wade Wilson captured her and he put her in a box. Originally, maybe she was a spy and that instead of killing her, he decided just to take her and then put her in a box. So, it was quite different in the film.

DC: Right! In the film, Blind Al meets Wade Wilson, and they develop this truly unique and kind of dysfunctional relationship together. Can you talk just a little bit about that special relationship between the two characters?

LU: I think the great thing about their relationship is that she doesn’t take any of his BS. She just lets him know exactly what the deal is and she doesn’t try to sugarcoat anything. That’s why they get along so well. He knows if he says something to her that she’s going to tell him like it is. Also, there’s also the fact that they live together. She can’t see, but she’s determined to do everything as if she could see – building that Ikea furniture that she’s hooked on. (laughs)  Then he comes in and blows on it, and everything falls apart. She’s always in the kitchen trying to do something. He just lets her do her craziness, and she lets him do his craziness, but they have a great rapport when it comes to talking about things. She’s very honest with him.

DC: On screen, you have such perfect chemistry with Ryan Reynolds and your scenes together just work so well! What is it like on set with him working with him?

LU: Very comfortable. Very comfortable and his mind is just amazing. He’ll come up with great ideas, and he’ll say to me, “Leslie, do you mind saying such and such,” and I go, “No. Let’s go for it!” I love the outrageousness of what he will come up with. He’s very witty. Then, of course, it’s so cool playing Blind Al opposite him because, even without her sight, she is very witty as well. She comes up with all kinds of things to say to him.

DC: So, is there a lot of improvisation going on?

LU: We do have the script, but if there’s something better that can be said, we will try different things. Of course, all that comes out of the mind of Ryan, so it’s, “Let’s try this line. Let’s see what happens.” Those kinds of things, which is so much fun. I love working that way.

DC: That’s so great. Ryan seems to have such a down to earth personality, and then he’s playing this larger than life character.

LU: He’s such a sweet person when he’s not doing that character. Most of the time, I’m asking him about his wife and his kids because I love babies! We’ll talk about the kids and things that his daughters are coming up with and stuff like that. He’s totally opposite than this wild and crazy, outgoing kind of character that he plays. You know, somebody said the other day that Deadpool says what we feel – what our mind says to us quietly inside but that we’re never going say. (Laughs) Deadpool says it.

DC: That’s so true! Are there any particularly fun or funny moments from filming that stand out to you that you can share?

LU: You know, our story is so outrageous that it’s a normal thing for everything to be as crazy as it is. While interacting with the other actors, there’s always a joke that’s going on and stuff like that. There’s always somebody who’s coming up with some funny thing to say. (laughs) Usually, it’s all X-rated.

DC: What has been your favorite part so far about playing Blind Al?

LU: I like playing somebody who is in that wild and crazy kind of world. That is a new experience for me, and so I’m enjoying this character and her independence very, very much. I just really adore her!

LU: What I love about these artists that are coming up today is that they seem to be more business minded than when I was coming up. We had people telling us constantly what to do and how to manage this and how to manage that, but these young people, they are business savvy as well as entertaining. I find that really interesting. I love that!

DC: Do you have any other upcoming projects or anything you’re currently working on that you’d like to share?

DC: Wonderful! As we close out our interview, is there anything that you’d like to say to the Deadpool fans that are going to be reading this?

LU: I just have to say that I’ve been welcomed into the comic book world and I have never, ever had fans like these. They are so devoted, and they’re so welcoming and so warm! I’m just loving it. Thank you, fans, for being so devoted to Deadpool!

Thank you, Leslie, for taking the time to speak with us here at Fan Fest News! It was truly an honor, privilege, and pleasure!

Make sure you catch Leslie Uggams, Ryan Reynolds and the rest of the cast in Deadpool 2 now playing in theaters nationwide. Also, don’t forget to check out our spoiler-free review of the film!