But with all the same old acts!

It’s nostalgia to the max

But seriously though, IndieWire reported today that Amblin Television and Warner Bros. Animation are in very early talks about making a new Animaniacs series! 2017 certainly seems to be the year of Reboots with Power Rangers, Samurai Jack and DuckTales. In fact I even wrote a Top 5 Series That Need A Proper Reboot article a few weeks ago! Though despite loving the series, I actually left Animaniacs off the list for the same reason many of you are hesitant hearing this news: Is Animaniacs TOO sacred a show to be reboot?

It was an age of incredible cartoons with Kids WB giving us Batman: The Animated Series, Tiny Toon Adventures, Freakazoid and of course Animaniacs! Each show had an incredible cast of talent behind them, but when it comes to disguising adult topics in a fast-paced kid-friendly format, Animaniacs wrote the book! Take the President Song or the time they performed a jazz solo at the birth of Jesus. Both of these shorts were indeed silly but also very respectful. Though no matter how respectful, there’s still some moments we’re surprised they got away with. At times it’s almost like they flaunted it!

The 90s were a very different time and in 2017 I wouldn’t be surprised if someone took offense to a cartoon where the main characters meet Satan (or worse, mock the head of their network). There’s certainly a ‘Lowest Common Denominator’ aspect to a lot of shows lately and mainstream channels are that concerned with ‘education’ anymore. So if this show does get made (and made right), it’s unlikely to exist in your standard cable package. Though recent years have also seen an enormous surge in alternatives to cable. In fact, Netflix started airing reruns of Animaniacs about a year ago and there has been a huge surge in popularity, which is no doubt why these talks are being had.

Nerdist news reached out to Warner Bros for comment, but they responded that they “have no comment on this ‘speculative report’. Since Warner Bros isn’t flat out denying it, I think it’s a safe bet these talks are indeed happening. Where these talks will go on the other hand is another story! Though as IndieWire reported, Seven Spielberg (who was in charge of the original series) is expected to be a part of it and they are trying to figure out WHERE to put this show. Though again, considering the recent resurgence of Animaniacs and other cult shows on Netflix, Netflix would be the best bet. 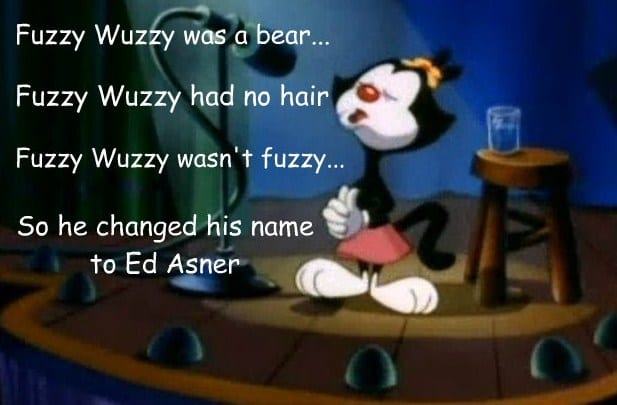 In the end, I hope this is real but only if it is actually Animaniacs. Animaniacs had a great sense of self-awareness, so the new series could begin with them having been locked up for the past few years ago and commenting on how much things have changed. Animaniacs had brilliant voice actors, beautiful artwork and wasn’t afraid to tackling big issues. We can absolutely use a show like that today! But if this reboot just has a vague character resemblance and none of the spirit (ie: Teen Titans Go), then do us all a favor and don’t bother. Animaniacs is indeed sacred, but that’s because we’ve never seen anything like it before or since.

Though even if we don’t get a reboot (or the reboot we want), at least we can still take comfort in there being exceptionally talented fans out there who can actually give our childhood treasures a fun, new feel. So I leave you with Saturday Morning Slow Jams’s “Animaniacs Theme Song” *pops in headphones*